Adventures of an Intern, Part One


On my first day of my internship I got to know Velcro. We were setting up for the new Civil War exhibit and the company that created the display panels forgot to put Velcro on the back. The important task fell upon my experienced hands to cut multiple strips of Velcro. I have to admit that it was therapeutic. Over the next few days I helped finish the exhibit. At one point I held a sword and rifle. It was awesome!  Of course, I had to pretend to shoot absolutely nothing because it made the experience complete. I tried my hand at the sword but that was an epic fail so I’ll just stick to firearms from now on. By the way, that rifle was heavy. HEAVY. I feel for those soldiers that had to lug that thing around and then were expected to shoot it constantly in battle, or use the bayonet at the end of it. That would have ended badly for me; and I would have been drafted because the little jar full of Popsicle sticks, red dot for not drafted and black for drafted, always gave me a black dot. Always. Except for the one time I searched for a red dot. I won that round. 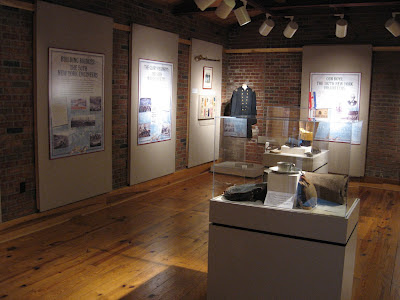 After my exhibit fun I got to travel into the secret mysterious room, called Collections. I swear that place is so exciting. All in one room are objects from CENTURIES of humans. Centuries! In one hand I could be holding a tool from the Native Americans that lived in the Chemung area long ago and the other a 1960’s election button for Nixon. However, I did not handle the delicate objects that way. In order to touch the objects in the mysterious Collections Room I had to wear gloves. Wearing gloves prevented the oils on my hands from damaging the historical objects.


My first task in Collections was the back left corner, the paintings. The paintings rest snugly in two shelving units. Please note the word snugly. The paintings were wrapped in cloth or packaging plastic, which means that they take up more space than they should. The wrapping is to protect the paintings but I can tell you right now it was the bane of my existence. Not only were the paintings snugly placed in the shelving but they also had the tendency to fall apart if they were really old, which was always a nice challenge. I had to take out every painting in Collections, photograph it and then write its number and a description.  After the pictures were uploaded onto the computer I would  enter them into the database, along with a description of each piece.  Here’s the cool part: every object you have ever seen in a museum has an ID number hidden somewhere on it. I had to find the ID number of the painting and sometimes there would be multiple numbers on one painting so I had to write them all down, later trying to find the one actually in the database. It was a long process. However, it was fun to see all of the art. There were water, acrylic and oil paintings. There were multiple charcoal renderings, which were my favorite. I can still remember the older lady who wore black clothing with a pink bow. It was gorgeous. There were also photographs that were so long in length that it was hard to get them in and out of their cubby hole. They were mainly photographs of groups of soldiers but it was interesting to see all of their different faces. It made me wonder what happened to all of them. Did they survive the war or did they die? What were their names and where did they go? Alas, I have no idea. Once everything once entered into the database my first mission was complete!

Posted by Chemung County Historical Society at 7:28 AM