The United States Food Administration was created as part of the Food and Fuel Control Act, or Lever Act, in August 1917 as a wartime measure.  The goal was to ensure a steady and cheap supply of needed foodstuffs to the military and our allies.  The administration had broad authority to set prices for staples like grain, license distributors, coordinate purchases for overseas shipments, prosecute profiteers and hoarders and encourage farmers to grow more.  It was headed up Herbert Hoover and his work would later propel him to the presidency. 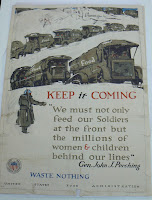 In addition to working with food producers, the Food Administration worked to change the habits of consumers as well.  President Wilson issued a proclamation asking Americans to have meatless Tuesdays, wheat-less Wednesdays and sweet-less Saturdays.  The directives were voluntary for ordinary citizens but the Food Administration could and did enforce them for bakeries, restaurants and other public eateries.  It also set up organizations designed to help people produce their own food.  The United States School Garden Army helped to train children to produce their own food for the war effort.  The War Garden Commission printed and distributed informational pamphlets on gardening and home food preservation.

The Food Administration was, however, controversial.  The Lever Act banned the use of grains for the production of alcohol as a wartime measure, effectively instituting a sort of backdoor prohibition.  Furthermore, many farmers felt that prices set by the administration were too low. 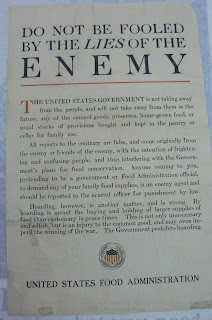 The United States Food Administration proved highly successful.  By the end of the war, nearly one-fourth of all American food production was being funneled into the war effort.  The administration continued its work after the war to feed refugees, but by the end of 1920 it had died out.
Posted by Chemung County Historical Society at 6:09 AM