Our Lady of the Flowers: Susan L. Crane

Susan Langdon Crane was an activist, a humanitarian, a reformer, a businesswoman and dairy farmer, a gardener, and a devoted member of Park Church. She was also Olivia “Livy” Langdon’s sister which made her Samuel Clemens’ (aka Mark Twain’s) sister-in-law. While being the in-law of a famous writer may be what Susan Crane is best known for, it is certainly not the most important part of her long, meaningful life.

Susan Dean was born in 1836 in Spencer, New York to Elijah and Mary Dean. Both her parents died when she was very young and Jervis and Olivia Langdon adopted her. In 1858 she married Theodore Crane, one of Jervis’s business associates. The couple never had children but Susan was very close to her sister Livy and her children. Susan was with Livy in Buffalo when she gave birth to her first child, Langdon. All three of Livy’s daughters, Clara, Jean, and Susy, were born at Quarry Farm, Susan and Theodore’s home. Susan helped care for Livy and the girls through various illnesses and traveled with the family in Europe. When Samuel Clemens departed with Livy and Clara on a world tour in 1895, Susy and Jean stayed with Susan. She was also the only family member present at Susy’s death.

Quarry Farm may be most famous as Mark Twain’s summer home, but it was Susan and Theodore Crane’s full-time residence. Susan inherited the property upon Jervis Langdon’s death in 1870. The farm had served as a summer cottage for the Langdon family. The Cranes turned it into a year-round home. Susan referred to Quarry Farm as “Go As You Please Hall.” She happily shared her home with Livy’s family during the summers for nearly 20 years. In that time she got to know Samuel Clemens quite well. She became his trusted friend and a sounding board for his writing. In 1874, she presented him with an octagonal writing study. This provided him with a quiet place to work and kept his constant smoking out of the main house. Clemens considered Quarry Farm the home of Tom Sawyer and Huckleberry Finn because the atmosphere of the place helped bring the characters to life. 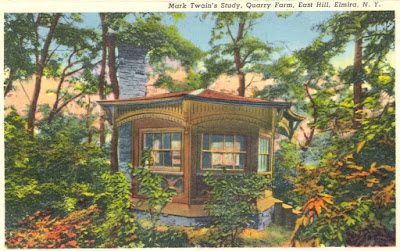 Quarry Farm was not only a place of leisure for Susan Crane. In 1903, it became a place of business. By the turn of the 20th century things had quieted down at the farm. Theodore Crane had died in 1889 and the Clemens family no longer summered there. In the early 1900s, frequent outbreaks of typhoid fever in the area were linked to dirty milk. The Elmira Academy of Medicine appointed a Milk Commission to try to solve the problem. The commission tried to get local milk producers to make efforts of produce more hygienic milk but all declined because the costs were too great. At the age of 66, Susan Crane volunteered to work with the commission and established the Quarry Farm Dairy. Her dairy produced milk under such sanitary conditions that it was the first to be certified by the health authorities as germ-free. The diary operated until 1919, selling clean milk in and around Elmira and donating it to local hospitals and sick families.

I suspect that Quarry Farm Dairy was not a major money-making venture for Susan Crane but it was a continuation of her life-long efforts to improve her community. She was a reformer and activist from an early age. Her first major community service came during the Civil War. At the age of 28 she was the chair of the Soldier’s Relief Association Finance Committee. Records show that in November 1864 she managed expenditures totaling $609.98 with $3,693.53 remaining cash on hand. Today, that would equal approximately $9,000 in expenditures and $56,000 cash on hand. She was also a member of the Women’s Christian Temperance Union and a supporter of the Elmira Industrial School, which provided low income and minority children with training in trades. 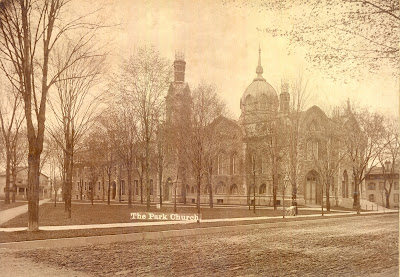 One of Susan Cranes’ most long-lasting and important community roles was as a member of the Park Church. She joined the then Independent Congregational Church in 1852 when she was 16 years old and was a member for 72 years. At the time of her death on August 29, 1924 she was the oldest member of the church. For over 60 years Susan prepared the communion table. She baked the bread, poured the wine, and cared for the linens. She joyfully continue the task even as her strength began to fail in her later years. She also provided floral arrangements for the church every Sunday for 50 years. She became known as “Our Lady of the Flowers,” because of this and only missed doing it twice – once on the Sunday following her husband Theodore’s death and once in the early 1910s when a week of heavy snow made it impossible to get down the hill from Quarry Farm. In a tribute to Susan Crane after her death in 1924, Rev. Albert G. Cornell called this her “floral ministry” and said that she “quietly preached the gospel of beauty through her floral sermons.”

Posted by Chemung County Historical Society at 6:09 AM