While doing research for the exhibit To the Rescue: Early Firefighters in Elmira, I came across a note about a man called “Chief Ross.” A file containing reminiscences of firefighters in the early 20th century included the story of a local character who made daily rounds visiting all the fire stations in the city. Chief Ross was described as “a simple, trusting soul with a retarded mentality but a faithful desire to please others.” He adored the firemen, lived meagerly, and died of pneumonia. His funeral was attended by a platoon of off-duty firefighters in full uniform and he was buried in the Exempt Firemen’s plot in Woodlawn Cemetery.

The short reminiscence gave a very brief account of this man’s life but I wanted to know more. In so many cases like this it is difficult, if not impossible, to find more information. Imagine my surprise when I found a newspaper article about Chief Ross and then a photograph of him as I continued my research in our archives. An online search of newspapers uncovered a half dozen more articles. While I still have a lot of questions about Chief Ross’s life and death, these articles provided far more information than I had expected to find.

Charles Owens was Chief Ross’s actual name. In 1926, Elmira fire chief John H. Espey told the Star-Gazette how Owens had come to be known as “Chief Ross.” “The only way I can figure it out is that Owen greatly resembled the lost Charley Ross, kidnapped in the ‘70s and never found. Although never a fireman, he bossed the department and told the boys just what to do, and when they didn’t do it, he threw off his coat and entered the thick of the fight with them. So they called him Chief Ross and the name stuck.”

Chief Ross started following the activities of the Elmira fire department at an early age. He visited the stations regularly and helped out whenever he could at the stations and at the scenes of fires. During the Lyceum Theater fire on March 8, 1904, which burned most of a block on Lake Street between Carroll and Market Streets, he hurried to assist the firefighters when asked while other men simply stood and watched. A newspaper report about the fire declared that Chief Ross was “a rough sort of fellow and possibly don’t know why it is that radium cures cancer, but he has just enough of that fool-hardy valor to make him of much use on such occasions.”

In another instance, when the department was still using horse-drawn equipment, Chief Ross stepped in to lend a hand. It was a cold winter night and three homes were on fire. The driver of one of the engines could not manages the horse so Chief Ross took the reins. He was able to calm the rearing horse and got the engine to the fire in record time. When he drove through Eldridge Park on the way, the horses were going so fast that they could not be slowed down to go under the railroad. Thinking quickly, he turned them and ran around the lake instead.

While Chief Ross never took a salary as a firefighter, he was a fixture in the department. He was at nearly every fire in the city and had a wonderfully retentive memory for facts and figures related to the conflagrations. Over the years, he also amassed a remarkable collection of firefighting badges, medals, and pins which he wore on a vest. One particularly large badge was made from the boiler plate of a steamer fire engine. It was reported that he wore his “18 pounds of medals” when he attended the firemen’s convention at Hornell in July 1909. The Star-Gazette reported that “‘Chief Ross’ will be one of the characters of the convention. He expects to open the new fire station and expects that he will be the grand marshal of the parade. He will also, he expects, respond to the address of welcome and will bow to the right and left when a chorus of 600 children sing ‘We Welcome You, O Chief.’”

Newspaper articles about the “Chief” were often written in a playful, or one may say, patronizing tone. For example, when he was found drunk at West Church and Davis Streets in April 1916, it was reported that “he was arrested for having taken on too big a cargo of fire water.” He appeared before the judge wearing a “big badge, the gift of No. 5 station firemen” and his sentence was suspended. While most people, including the firefighters and reporters, were quite fond of Chief Ross, it seemed that others would put him down and picked on him because of his lower mental capacity. During the Lyceum Fire mentioned before, the reporter noticed that among the gathered crowd of onlookers “there were a lot of men and boys who were doing all they could to amuse themselves at the chief’s expense.” Even the firefighters themselves would sometimes make him the butt of their jokes. In the original reminiscence that introduced me to Chief Ross, a firefighter stated that they were not unkind to him but they “would have a little fun” with him at times.

In June 1926, while visiting fire station No. 2, Chief Ross fell ill. The firefighters helped him to the bunk room to rest but he got worse. They then took him to the hospital and found that he had a severe case of pneumonia. On June 21, he died at the county farm in Breesport. The firefighters immediately started a fund to raise money for a fitting burial. Chief Espey, Commissioner Leonard Whittier, George Remer, and nearly every off-duty firefighter in the city attended the funeral while six firemen served as pallbearers. After devoting nearly 45 years of his life to the Elmira Fire Department, Chief Ross, Charles Owens, was laid to rest in the Elmira Exempt Fire Association’s plot in Woodlawn Cemetery. His headstone is inscribed: Member of Paid Department. 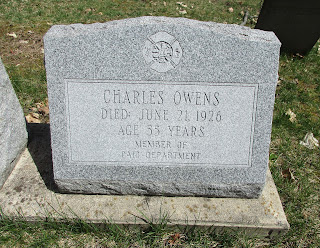