On October 1, 1918, the Weinstein family of Elmira was notified that their son, Jacob, was sick at the Great Lakes Naval Training Station near Chicago. Spanish Flu had reached epidemic proportions at the base, and one Elmira man had already died there. Jacob, a Pharmacists Mate, had been tending the sick when he fell ill. His brother David boarded the first available train to Chicago. By the time he arrived at 4pm Chicago time, Jacob was already dead. 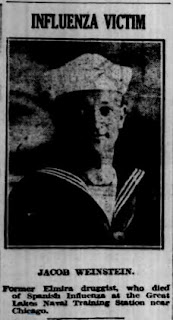 The Spanish Flu epidemic was the second deadliest epidemic in history. There are no definite numbers due to poor record keeping, but somewhere between 20 and 100 million people died of it worldwide. Nationwide, over a quarter of the population was infected while approximately 600,000 died. While most flus only kill the very young, the very old, and the sickly, the Spanish Flu’s main victims were healthy young adults. Young people in the armed services dropped like flies.

During World War I, approximately 5,000 Chemung County residents joined the armed services. 138 of them never came home alive. Of those, nearly 2 dozen died of the flu or related complications.

In many ways, the war created the perfect storm for the epidemic. Soldiers traveling across the country in crowded troop trains infected each other and people in the towns they passed. Here in Elmira, the local chapter of the Red Cross had a canteen at the railroad station to provide refreshments to men on the troop trains. During 1918, they served 126,798 troops. In late October, Red Cross canteen workers discovered 12 Oklahoma men sick with a flu on a passing troop train. The men were removed to Arnot-Ogden Hospital where they all eventually recovered. Who knows how many men they had already infected by then?

Conditions at the training camps were terrible as men from all over the country infected each other. The camps were very crowded with as many as 25,000 to 55,000 men. The flu first struck in Boston in late August and, within ten days, thousands of recruits at the nearby Camp Devens were sick. Seemingly healthy soldiers were transferred out to other camps, spreading the disease with them. Rates of infection at the camps varied wildly from just 10% at Camp Lewis, Washington, to 63% at Camp Beauregard, Louisiana. The average were somewhere between 25 to 40%, with approximately 2% of the infected dying.

Training camps were woefully unprepared to deal with the epidemic. Not only were individual camps slow to initiate quarantines which might have prevented the spread of the illness outside the camps, they failed to institute internal quarantines as well. Men were turned away from sick call unless they were running a fever of over 101 degrees and the military’s insistence that training continue meant that those who did not yet qualify for sick call could infect their classmates and instructors. Camp medical personnel often lacked necessary supplies to treat the sick. At the Great Lakes Naval Training Station, only 96 out of 674 hospital workers were issued masks. Over 25 nurses and hospital corpsmen, including Jacob Weinstein, died as a result.

Check out Spanish Flu to see the effects of the flu on Chemung County.

GET A FLU SHOT!
Posted by Chemung County Historical Society at 5:00 AM