Did you know a fragrant pink lotion and Elmira's Civil War Prison Camp are forever linked? 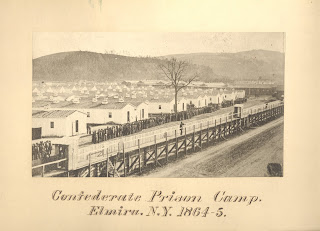 Both are part of the story of Clayton Wood Holmes, a druggist from Elmira. Clayton W. Holmes was born in northeast Pennsylvania in 1848. His father was a physician who privately tutored him with hopes he would follow him into medicine. 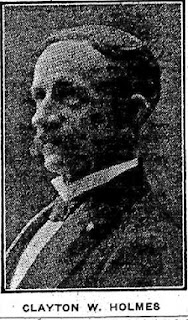 In college Clayton excelled in his studies and had a very active social life. He was a member of a number of clubs including a charter member of a campus fraternity. He did intend to study medicine after graduation, but things changed for him when his father died unexpectedly. Needing to make money, Clayton returned to his hometown and started working in the retail drug business. He married, began a family, and four years later moved his young family to Elmira. In Elmira, he opened a wholesale drug manufacturing business on Lake Street. The business did well until a devastating fire in 1885 burned the building down. Clayton was forced to relocate and rebuild, and he moved his business operations to West Gray Street. There, at the rear of his family home, he built a new factory. It was here that he began to focus most of his business on making a popular fragrant pink lotion he had invented years earlier.

Unlike many of the lotions and potions of the day, Clayton never made claims that his lotion contained secret or miraculous ingredients, or that it solved a long list of complaints. It seems he didn’t need to, as demand for the lotion was immediate. In 1914 a drug trade magazine published a claim that the lotion’s ingredients contained glycerin, quince seed, water, deodorized alcohol and perfume “as desired.” This claim was never disputed. As demand for the pink lotion grew, he received orders from people in other states and in other countries. By 1888 the lotion was so popular that he sold off the drug manufacturing part of his business, to start an ingenious advertising campaign for the pink product he now called “Frostilla.”

Clayton Holmes claimed that he started the practice of providing customers with free product samples and advertising. It’s hard to substantiate, since the practice caught on and spread quickly. Regardless, Frostilla was a big success. The company produced other personal care products like Frostilla Brushless Shave Creme and Frostilla Sunfilter Creme, but neither came close to the success of the pink fragrant lotion. 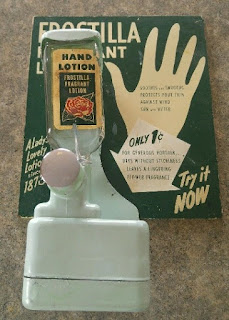 The hand lotion was Clayton’s main business, but not his only business venture. He was manager of the daily Elmira Advertiser, and eventually became the paper’s owner and publisher. He was founder and president of Elmira Cooperative Savings & Loan Association; an organizer and board member of Chemung Valley Mutual Loan Association; and president of the local electric company and water board. He owned and operated a furniture business in northern Pennsylvania. He belonged to the Elmira Automobile Club, the Automotive Club of America, and the Geneva Rotary. Professionally, he was a member of the NY Pharmacists Association, known to advocate for establishing a druggists’ mutual insurance fund to protect others who might experience fire loss like he had. Civically minded, he was a member of Elmira’s City Council; a member of the Elmira School Board; an officer of the first Baptist Church of Elmira; a trustee of the YMCA; City Club; Century Club and the Masonic Club. He was an active member of the Sons of the American Revolution, the Newtown Battlefield Chapter, and Sons of Veterans. This last association is the link to Elmira’s Civil War Prison Camp.

Clayton had always been interested in genealogy and history. He had traced his own lineage back to the 1600s, and published a book on his ancestors. Tapping into his various interests, writing skills and civic mindedness, he wanted to improve the public image of the Civil War Prison Camp, and how it reflected on the people of Elmira. He compiled The Elmira Prison Camp, and recorded first-hand accounts of Union and Confederate soldiers. He produced what is considered an early authority on the subject. Today, some believe his version doesn't quite reflect the camp's true complexity.

In 1919, when he was seventy years old, Clayton W. Holmes died of a heart attack. He left behind a wife, daughter, and son-in-law. He is buried in Woodlawn Cemetery.
Posted by Chemung County Historical Society at 6:07 AM