by Susan Zehnder, Education Director
One day while playing ball, thirteen-year-old Clara Cook threw a life changing pitch. Clara was a left-handed pitcher and batter who honed her skills playing with friends and family in after-school pick-up games. She went on to make history as one of the founding members of the All-American Girls Professional Baseball League (AAGPBL). During the two years she played professional ball, she was a member of three teams, two of which earned championship titles.

Born in 1921 to John H. and Clara B. Cook in Pine City, Clara was the youngest of eleven children. The family had six boys and five girls. Being the youngest earned her the nickname "Babe," and being just 5' 2" tall, it was a nickname that stuck. The combination of her diminutive height and being the youngest in a large family didn’t hold her back. She proved herself to be a fierce afterschool player against her brothers and friends. That determination is what a Remington Rand employee named Riley observed in 1922 when he came across the kids playing a casual game. Riley was looking for new talent to join the Remington factory softball team and was so impressed with what he saw, he approached Clara's parents. He received permission for her to play ball and promised to be responsible for transporting Clara back and forth from practices and games. At thirteen years old, Clara started playing for Remington's ball team.

John H. Cook, Clara's father, served as school trustee for the Pine City School in the 1920s and for over thirty years he was employed as an interior designer for F. M. Bottcher & Lowman Construction Company.


Clara's mother taught sewing skills at the YWCA, and the family belonged to the Baptist church. During her school years, Clara moved with her family to Elmira, and graduated from Southside High School. After graduation, she went to work full time for Remington Rand. 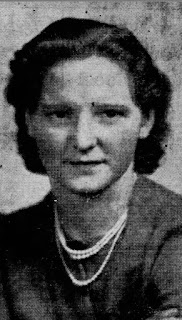 In July 1941, when Clara was 20 years old, the Star-Gazette announced that Clara Ruth Cook had become engaged to Henry A. Pickel, but no wedding date had been set. Henry had grown up in Pine City and was a Southside wrestling champion. He had enlisted in the US Army before WWII and was a Sargent in Company L. The month the couple was engaged, he left for military training. The couple never married.

Clara worked for Remington Rand and continued to play ball. In 1942, she was recruited by an AAGPBL scout who was looking to start a new league. Clara tried out and was accepted. She was offered a contract to play with the 1943 Rockford Peaches. Clara signed on the dotted line and left Elmira heading for Rockford, Illinois.

Clara began her season as a Rockford Peach. The team went on to earn the most league titles and had a resurgence of popularity in the 1990s when Gina Davis starred in "A League of One's Own" based on their story.

The AAGPBL had invited two hundred white women to try out for four teams. Sixty women made the cut as the original founding members. Like the men's leagues at the time, teams were segregated. In 1948 seven women of color from Cuba were invited to join the league. In 1951 the first African American woman ball player, Toni Stone, joined the men’s Negro League. It was the only league open to Blacks, and the players weren't too happy to have a woman join them. The AAGPBL players used baseball rules, but played with a 12-inch softball. The league was located entirely in the Midwest and lasted from 1943 – 1954. It grew to have ten teams and audiences in the thousands. Players were selected on their skill and looks and were required to wear lipstick and short skirts while playing ball.

The beginning of Clara's 1943 pitching season didn't go well. Despite her best efforts, she allowed more runs than any other pitcher. After 30 games she held a record of 6 wins to 17 losses. By mid-season, Clara was traded to the Kenosha Comets from Kenosha, Wisconsin. This season ended better for her. The Comets won the league’s Championship title for the year.

The next season Clara was traded to the Milwaukee Chicks based in Milwaukee, Wisconsin. This team won the 1944 Championship title. However, the Chicks struggled financially, and despite being league champions the owners couldn't secure support or additional funding from the city of Milwaukee. The team moved to Grand Rapids, Michigan. Clara never joined them, leaving just before the 1945 season began to return to Elmira.

Clara returned to work at Remington Rand and she never played professional ball again. Clara's father died in January 1946. In 1955, the Remington Rand plant was bought by the Sperry Corporation. Clara moved to California to work at an aircraft company, returning to Elmira when she retired. She stayed active in local baseball organizing teams and mentoring young women interested in pitching.

In 1975, Clara Cook was inducted into the Metro-Elmira Sports Hall of Fame. She is also part of the Women in Baseball exhibit on display at the Baseball Hall of Fame and Museum in Cooperstown, NY. On display since 1988, it honors the accomplishments of the entire All-American Girls Professional Baseball league and remains one of their most popular exhibits. Clara Ruth "Babe" Cook died in Elmira on July 23, 1996 at the age of 75. She was buried at Webb Mills Cemetery near the Town of Southport. 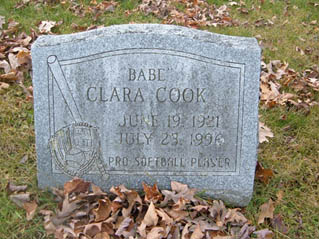 Posted by Chemung County Historical Society at 5:59 AM