On January 3, 1942 at 9:35pm, every factory whistle and siren in the greater Elmira metro area began to sound the alarm. An attack was imminent. Within minutes, the entire city went dark. Well, dark-ish.

Less than a month after the attack on Pearl Harbor, America was on edge, bracing for the sorts of nighttime bombings that England had been living with for years. Throughout the first months of 1942, cities across the country began preparing for air raids. Chemung County, which had over a dozen factories involved in war production, not to mention the Horseheads Holding Point, could be considered a prime target. The January 3rd blackout drill was just the first of what would be a regular occurrence throughout the duration of the war.

In the days and weeks leading up to the first drill, instructions were published in the local paper and broadcast over the radio. Residents were to draw the curtains, turn off the lights, and shelter in place. Motorists were instructed to pull over and switch off their headlights. Businesses were to shut off their lights and factories, unless they had blacked out their windows, were to halt production until the all clear.  Teams of auxiliary police and air raid wardens were in charge of inspecting neighborhoods to ensure that everyone was following the rules. 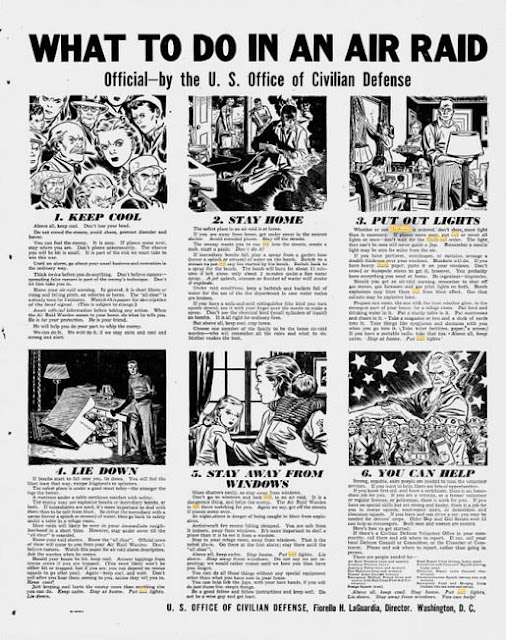 In addition to making sure everyone was following the rules, Civil Defense workers also used the blackout drills as a chance to practice for emergencies. In a drill on the night of June 16th, for example, 110 auxiliary firemen were driven to the site of 12 fake “incidents” by the women of the Women’s Ambulance Defense Corps where they put out fake fires and rescued trapped actors from amidst rubble. In November, rescue workers used a recently burned building for the drill, only to run into trouble when the stairway to the second floor unexpectedly collapsed.

Blackout drills rarely went seamlessly. During the drill on the night of June 16th, Mrs. Carolyn Watson of 512 W. Hudson had to be taken to the hospital after falling in the dark. Compliance with the rules was also an issue.  A number of downtown businesses frequently failed to extinguish the lights in their display windows. In June 1942, Ralph Klebes, the head of the local Office of Civil Defense, considered ordering that all store display window lights be turned off every night, since business owners seemed to have such a hard time making sure they were off during scheduled blackout drills. People in residential areas weren’t particularly good about blacking out either. Some of the problem was that not everyone lived where they could hear the sirens. Other people just didn’t take the drills seriously. Beginning in November, people who willfully or repeatedly failed to comply with blackout orders were fined.

Some Elmirans might not have taken them seriously, but blackouts on the coast were a matter of life and death. Starting on the night of January 11, 1942, German U-boats began attacking commercial shipping along the eastern seaboard and Gulf of Mexico. Ships silhouetted against the lights from the coast made tempting targets. Although some smaller municipalities instituted nighttime blackouts, cities like New York and Atlantic City resisted implementing them, fearing their impact on tourism. The results were disastrous.  Between January and July of 1942, U-boats sank 233 ships, taking out 22% of the US tanker fleet, and killing upwards of 5,000 sailors along the stretch of coastline from Maine to Florida. It wasn’t until the Navy, Coast Guard, and Civil Air Patrol began working together to craft a coordinated defense in the summer of 1942 that there was an end to the carnage.

In the end, Chemung County never fell prey to the air raids the blackout drills were designed to help residents prepare for. Looking back from our vantage in history, it can be easy to dismiss the drills as a pointless waste of time, but they weren’t. Not only did they provide disaster preparedness training to hundreds of people who went on to use those skills in times of actual crisis, they brought comfort to people who were in genuine fear of their lives by giving them tools to protect themselves. Yes, not everyone took them seriously, but the overwhelming majority tried their best to participate in order to protect themselves, their neighbors, and their country despite the inconvenience they caused. In short, WEAR YOUR MASK!

Posted by Chemung County Historical Society at 2:30 AM