Esther Baker Steele: A Woman of her Word

In the 19th century, the Reverend Gardner Baker and his wife Esther, and daughter also named Esther, lived in Lysander, a village located in Onondaga County, New York. Reverend Baker was a well-known minister and prominent member of the Northern New York Methodist Episcopal Conference. Members of this group were known as early advocates for progressive issues like anti-elitism, anti-slavery, and women’s education. Growing up in this environment shaped their daughter's intellectual and philanthropic life, and Elmira ultimately benefited.

Esther was born on August 4, 1835, and she studied at Mexico Academy and Falley Seminary. A good student, Esther became known for her outstanding writing skills and musical talents. She graduated in 1858 and was hired to be Mexico Academy's music teacher. Another teacher hired that year was Joel Dorman Steele, the institution's new teacher of natural sciences.

Steele had been on his own since he was seventeen, supporting himself as a teacher. In addition to his position at Mexico Academy he earned a degree from Genesee College, now a part of Syracuse University. The two new teachers hit it off and Joel and Esther were married less than a year later. They moved to Oswego County where Steele was appointed school principal. Three years later, the Civil War broke out and Steele enlisted and took command of a Union company. Unfortunately, he was badly wounded in the battle of Fair Oaks and endured a long recovery in which he suffered a terrible bout with typhus. This disease compromised his health for the rest of his life. After he was discharged he returned to Esther and was employed as principal in Newark and then in Elmira. The couple enjoyed working with young people, though the couple never had children of their own. They did a foster son named Allen D. Steele, who comes up briefly later.

As an educator, J. Dorman Steele saw a need for new scientific textbooks. He wrote his first textbook in 1869, which was so well-received, that by 1872 he gave up teaching all together. With Esther's help, he went on to write textbooks on astronomy, chemistry, philosophy, and history. 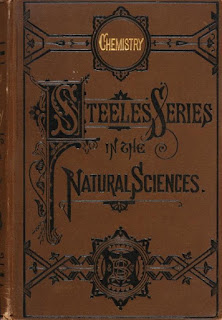 To conduct research on a variety of subjects, the Steeles traveled to Europe four times. Together they produced 15 textbooks. Unusual for the time, Steele insisted that his name be attached only to the scientific texts, but that Esther be given credit to the rest. He said that “My wife came at once into full accord with all my plans; she aided me by her service, cheered me by her hopefulness and merged her life in mine. Looking back upon the past, I hardly know where her work ended and mine began, so perfectly have they blended.” Their publisher recognized this too, once writing to Steele "We really think you will find Mrs. Steele better adapted to present it than yourself."

On May 25, 1886 at 50 years old, Joel Dorman Steele died from a heart condition.  One of his last requests to Esther was that she manage his extensive book collection numbering in the tens of thousands. Also to pursue the dream of establishing a library for the citizens of Elmira.

Esther kept her promise, and she lived on another twelve years. She continued to revise and update the various textbooks. She became a generous benefactor and regularly gave away two thirds of her yearly income. In 1892, she received an honorary Doctor of Literature degree from Syracuse University, and three years later was elected to the university's Board of Trustees. In 1898 the university named the Esther Baker Steele Hall of Science in her honor. Finally in 1899, Chemung County’s first free public library opened to the public, its core collection contained the books the Steeles had collected over the years.

The couple's foster son's name appears in a 1895 lawsuit against Syracuse University. According to Steele's will, their foster son was to receive a yearly allowance of $1,200 (about $33,000 in today's funds) which would be managed by the university. This sum was paid for a few years before the lawsuit was filed, then ceased. Esther died in 1911 and is buried in Woodlawn Cemetery next to her husband. Allen D. Steele is buried in Kentucky.

Esther's word and promise to her husband to establish a library in his memory lives on. During COVID, the Steele Memorial Library has been able to offer the community virtual activities and services, things its benefactor Esther Baker Steele could only have dreamed about.