Lost and Found: The Labrador Duck

There’s a story in my family that once I was trying to tell them about a duck I’d seen and after denying their many suggestions, I blurted out in frustration, “it was a special duck!” which of course made no sense. Located in Brand Park near the banks of the Chemung River there is a real special duck, or at least a statue of one recognizing the Labrador Duck. The statue is part of the Lost Bird Project, and is located at what is thought to be the last known place in the world where this special duck was seen alive in 1878.

The five hundred and forty pound bronze statue of a stylized Labrador Duck was sculpted by artist Todd McGrain, while he was an artist-in-residence at Cornell University’s Lab of Ornithology. The statue was installed in May of 2009, and is the first in a five bird project highlighting North American birds that have gone extinct. The sculpture was privately funded and a gift to the people of Elmira. McGrain completed the duck and went on to design and install four other birds throughout the continent. They are the Great Auk in Newfoundland, Canada; the Heath Hen in Martha’s Vineyard, Massachusetts; the Carolina Parakeet in Okeechobee, Florida; and the Passenger Pigeon in Columbus, Ohio. Copies of the sculptures have traveled and been exhibited in various museums throughout the US. In 2010 a 63-minute documentary was made about the project and in the fall of 2014, McGrain wrote a book based on this work.
McGrain has been a sculptor for over 25 years. He has received numerous grants and awards and exhibited widely. His interest in connecting his artwork to environmental issues has grown and evolved to include documentary film work. Currently McGrain is documenting conditions of the Forest Elephants of Central Africa, and involved in a data collection company monitoring ocean climates.

In various interviews about the Lost Bird Project McGrain talks about the importance of memorializing and bringing awareness to birds now lost, saying that “forgetting is another form of extinction.”

Sadly over 190 known species of birds have gone extinct, and more than 100 of these just in the last century.

The local story of the Labrador Duck’s Elmira demise has been retold in newspapers as far back as 1879 and repeated as recently as 2015. It involves pharmacist, doctor, and scientific investigator Dr. William H. Gregg identifying the remaining head and neck of a duck shot and eaten by a hungry family.

Digging into the Labrador Duck’s extinction story reveals some interesting contradictions. Its name comes from the east coast where it lived along the seashore, and its diet consisted of shellfish.


The duck had black and white feathers, and was prized for its eggs and plumage. It has also been called a skunk duck because of its coloring. It was hunted for food though its meat was considered bad tasting and reportedly spoiled quickly. Alexander Wilson, a naturalist in the early 1800s described the species as scarce and located along the coasts, and “never met with on fresh water lakes or rivers.” The only nests associated with the species were identified near Quebec and pointed out to John Woodhouse Audubon, son of the famous ornithologist, as belonging to the pied duck. However the same term was also used for the surf scoter and common goldeneye. The Labrador Duck is considered to be the first species of North American birds to go extinct in modern times. If indeed the unlucky duck actually found its way to Elmira, any ability to thrive seems questionable.

Author Kelli L. Huggins adds further questions about the mythic story by picking apart the principal characters associated with the so-called discovery in her book (available online) Curiosities of Elmira: The Last Labrador Duck, Professor Smokeball, the Great Female Crime Spree and More published by The History Press in 2017.

We can verify the Labrador Duck is no more and seems to carry the distinction of being the first North American bird to go extinct in recorded US history. Whether it came about through the elaborate and somewhat sketchy version of arriving in Chemung County, being shot for food, and finally eaten by a lad from Elmira in 1878 or whether it disappeared due to other reasons is not so clear. 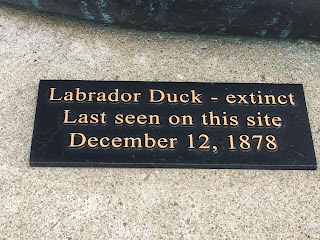 The specialness of Todd McGrain’s work may not be based on an actual event that happened December 12, 1878. It does bring an awareness to species extinction by using art and ornithological history to remind us not to forget. Public art can have a powerful impact on communities, helping us to remember.

To discover more local history, check out our gift shop both in person or online!

Posted by Chemung County Historical Society at 4:30 AM