When I first began my internship here at the Chemung Valley History Museum one of the first things I think that I shared with Erin (CVHM curator) was my Native American heritage, and my obvious pride in it. Before starting my internship I had visited the museum twice for school functions, and both times I had been drawn to the ‘Seneca’ section in the Bank Gallery. Although my family is from the Mohawk tribe, the Seneca and the Mohawk were both a part of the Iroquois Confederacy along with four other tribes, and any history discussing the Confederacy grabs my interest.  Because of this, when it came time for me to choose a topic for a 20 page paper for a class I took at Elmira College, I chose the Life of the Iroquois in New York State, Before and After Colonization. Armed with this knowledge and stories that my family has shared with me, I was really excited to see what CVHM had in its archives and collections that related to Native American’s.

While working on other projects in the museum, learning the in’s and out’s, every so often I would see some native objects, both in collections or in the exhibit, and I began to think back at the American Indian Museum in D.C., and about what I liked about how they displayed their artifacts, and what I didn’t like. My thoughts quickly lead me to remember learning about Natives in school, and what exactly we were told about them in our classes, and what I realized was how little the Natives on the east coast are talked about, in either schools or museums. The memories were easy to recall because ever since I can remember I have been proud of being a part of the Mohawk tribe. In second grade, in celebration of Thanksgiving, my peers and I were told the day before break we could dress up as either a Pilgrim or an Indian and we would ‘act out’ the first Thanksgiving and learn about why we still celebrate it. Of course I chose to be an Indian, there was no other option. In the fourth grade we were taught New York State history and we had to build a model of an Iroquois longhouse. That weekend at home my parents and I spent all of our time in the kitchen working on the model and playing Native music. After we presented our models to our classmates, our teacher taught us that the Iroquois, or SCOOM (Seneca, Cayuga, Onondaga, Oneida, and Mohawk (we never talked about the Tuscarora)) lived in New York and along the east coast, and they grew three major crops, but after that there wasn’t anything else we were taught, and I can clearly remember the disappointment that we weren’t being told more.

After middle school the only Natives we ever covered in history classes were the ‘Plains Indians’, discussing things like the Trail of Tears or the Battle of Bull Run, and even then I wondered why not the other tribes? The Natives on the east coast have an interesting history too! Eventually I let these feelings go as I entered college and began to concentrate on European history, rather than American, and it wasn’t until my D.C. visit that my concerns returned.

When a museum is small like CVHM I understand that they probably don’t have the resources to really expand certain exhibits like they want to, but at least they were able to share Chemung County’s history of having Seneca tribes as a part of their history. The larger museums are the ones that have me confused. There are two National Museums of the American Indian, one in Washington, D.C., the other in New York City. These institutions clearly have a lot of funding, a lot of support, and a lot of space so they are able to display a very wide range of their objects. 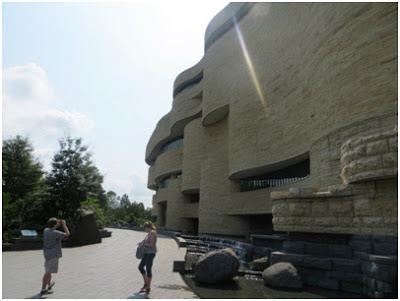 During my visit to the D.C. museum I was in awe of how expansive their building was, of how the architecture was designed in a way to reflect the culture that was being displayed. Through its three levels the museum was able to separate the areas of the U.S. and then take the tribes from those areas and look at them at several angles: their belief system, what they ate, what they lived in, and how those things were affected by where they lived in the country. The entire time my friends and I walked through the museum I kept an eye out for the clear signs of the Iroquois: their language, their flag, a familiar name. Every so often there were hints of those things, like a beaded pin cushion made by a clan mother, or a headdress that identified the wearer as a Mohawk chief, but it was not until we went to the last level and walked into the 21st century exhibit did I find what I was looking for. This exhibit explained to the visitor what life was like for the tribes now. Pictures showed what their houses looked like, and newspapers talked about our yearly Pow Wow - a large festival with traditional dancing and pottery and an all-around cultural celebration. 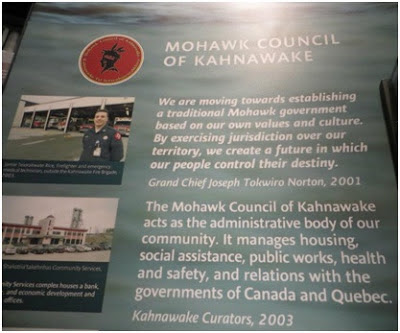 Though this did excite me, I was definitely let down. It was like middle and high school all over again. I wanted to see the history of my family. I wanted to learn more about how they lived and who they interacted with. These tribes had their own writing system, they lived in structures that look like houses that we have today and they even had their own democracy! Is it because of these facts that not many people find them worthy of deeper research? Does this make them not interesting enough for large museums to create exhibits around them? Isn’t their influence on the first Europeans enough to be taught in schools? Maybe I feel this way because the culture is so dear to me and I am very passionate about it, but I still believe that it is important for more of the history to be told.
Posted by Chemung County Historical Society at 6:39 AM