A Salute to Women


Come to the CCHS on Tuesday, March 5th, 6:30-8:30 pm and Salute Your Favorite Woman in History at the Festival of Women in the Arts Opening Reception.  The festival, which is coordinated and sponsored by the Cantata Singers, is a month-long celebration of Women's History Month. Visit www.cantatasingers.com for more information and a full schedule of events.

Our region is filled with women, both past and present, who deserve to be recognized for their accomplishments.  Dr. Frances Mabel Flood Heath, better known as Mabel, is one.  She was born in Elmira on April 6, 1884 to Thomas and Frances Miller Flood.  Her father, Thomas, was a local pharmacist and politician and her grandfather, uncle and cousin were all physicians.  In 1911, she followed family tradition and graduated from Buffalo Medical College.  After briefly working at a hospital in Buffalo, she returned to Elmira in 1912 and opened her own practice.

In 1917, the American Red Cross put out a call for female physicians to help with the war effort and Mabel, along with her cousin Dr. Regina Flood Keyes of Buffalo, answered the call.  The two women were posted in the Balkans where they established the American Women’s Hospital in Monastir, Serbia.  The hospital had 65 beds, saw nearly 3,000 out-patients a month and had a reputation of being the best hospital in the Balkans. Regina served as surgeon and commanding officer while Mabel oversaw the medical cases.  The two saw the hospital through the flu epidemic in 1918 and an epidemic of typhus in 1919 while still managing to educate young Serbians on basic medical care.  For their efforts, both women were awarded medals and honored by the governments of Serbia, France and the United States. 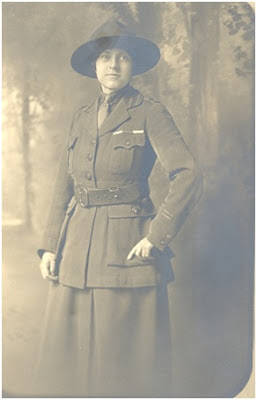 Mabel returned to the United States in 1920.  On the steamer ship back she met Alfred Heath of Liverpool, England, one of the ship’s officers, and the two were married on August 31, 1920.  The Heaths returned to Elmira where Mabel re-established her medical practice and Alfred went into the dry cleaning business.  The couple had a daughter Marjorie Louise in 1922.  Dr. Mabel Flood Heath died less than six months later on April 26, 1923 from complications following an operation for appendicitis.  On May 3, 1927 she was posthumously awarded the Order of St. Sava by King Alexander of Serbia which her daughter received on her behalf.
Posted by Chemung County Historical Society at 6:13 AM