“Washed in the forenoon and sowed till night then ironed the white clothes.  George a went to the Corners with Jacob Enat.”  - Kate Synder diary, February 4, 1880.

Laundry.  It’s a dull but necessary task and one traditionally assigned to women.  In the days before electricity and washing machines (days still ongoing in many parts of the world) cleaning clothing was both time consuming and backbreaking.  Water had to be boiled and clothes had to be soaked, scrubbed, rinsed, wrung out, hung out to dry and, if you were feeling ambitious, ironed.  It was a process that could literally take all day and give a housewife muscles like a longshoreman. 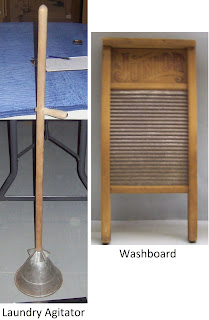 Of course, not all laundry was created equal.  A wealthy upper class woman was not doing her own wash.  Instead, she either paid domestic servants to do it in house or sent her washing out to a laundry service.  In 1890, there were 12 industrial laundries in the City of Elmira as well as an unknown number of poorer women who took in washing which they did in their homes.  For women with children, taking in laundry was the perfect job.  It allowed them to keep an eye on the younger kids, take advantage of the labor of the older ones and put food on the table.
The first electric washing machine hit the market in 1900, but it would be years before it really revolutionized the way people cleaned their clothes.  Early washing machines were expensive costing as much as $3.90, which was twice what the most expensive manual washers cost.  They also required electricity which was slow to spread across Chemung County.  While the City of Elmira was electrified in 1900, some of the more rural parts didn’t have power until the 1930s.

Posted by Chemung County Historical Society at 7:34 AM