This week’s blog post is both a local and a national story.  It’s a quintessentially American tale, one of a hard-working immigrant who built a successful business, but who also eventually fell victim to economic conditions outside of his control.   Jacob Greener and his piano business show how the experience one local family can reveal much about national cultural and business changes from the mid-1800s to the mid-20th century.
Greener was born in Worms, Germany on February 2, 1825.  He apprenticed with a piano manufacturer in Germany, but immigrated to the United States in 1846 after his father purchased him an exemption from German military service.  He arrived in New York City, where he remained for six years and worked in a piano factory.  Greener married fellow German immigrant Theresa Hay in New York City in June 1848 and the pair had four children: Sophia, Charles, Laura, and Augustus.

During that time, Greener visited Elmira on business, liked what he saw, and in 1853, moved here to set up his own shop.  It took Greener two years to move his equipment to Albany and the Erie Canal and then to Elmira via the Chemung Canal.  Greener initially partnered with Julian Eliason and William Yates, forming Eliason, Greener & Company.  After Eliason left the city in 1866, Greener bought out the company from Yates and became the sole owner.

Greener operated his business and maintained his family home at 221 East Church Street.  He employed about 60 men at the height of business.  Greener’s business flourished due in large part to the popularity of the piano in the mid-1800s.  During the 19th century, most middle and upper class homes featured a piano.  Piano prowess was considered an essential skill for young ladies and the piano served as an important form of entertainment.

Greener, a proficient musician, not only sold pianos, but also patented two piano improvements.  His 1869 piano soft pedal patent was widely regarded as a significant technological achievement.  Greener also patented a piano action in 1893.  He was also apparently a man of diverse interests, because his other invention had nothing to do with music: it was a life-saving device to be used at sea, which he patented in 1895. 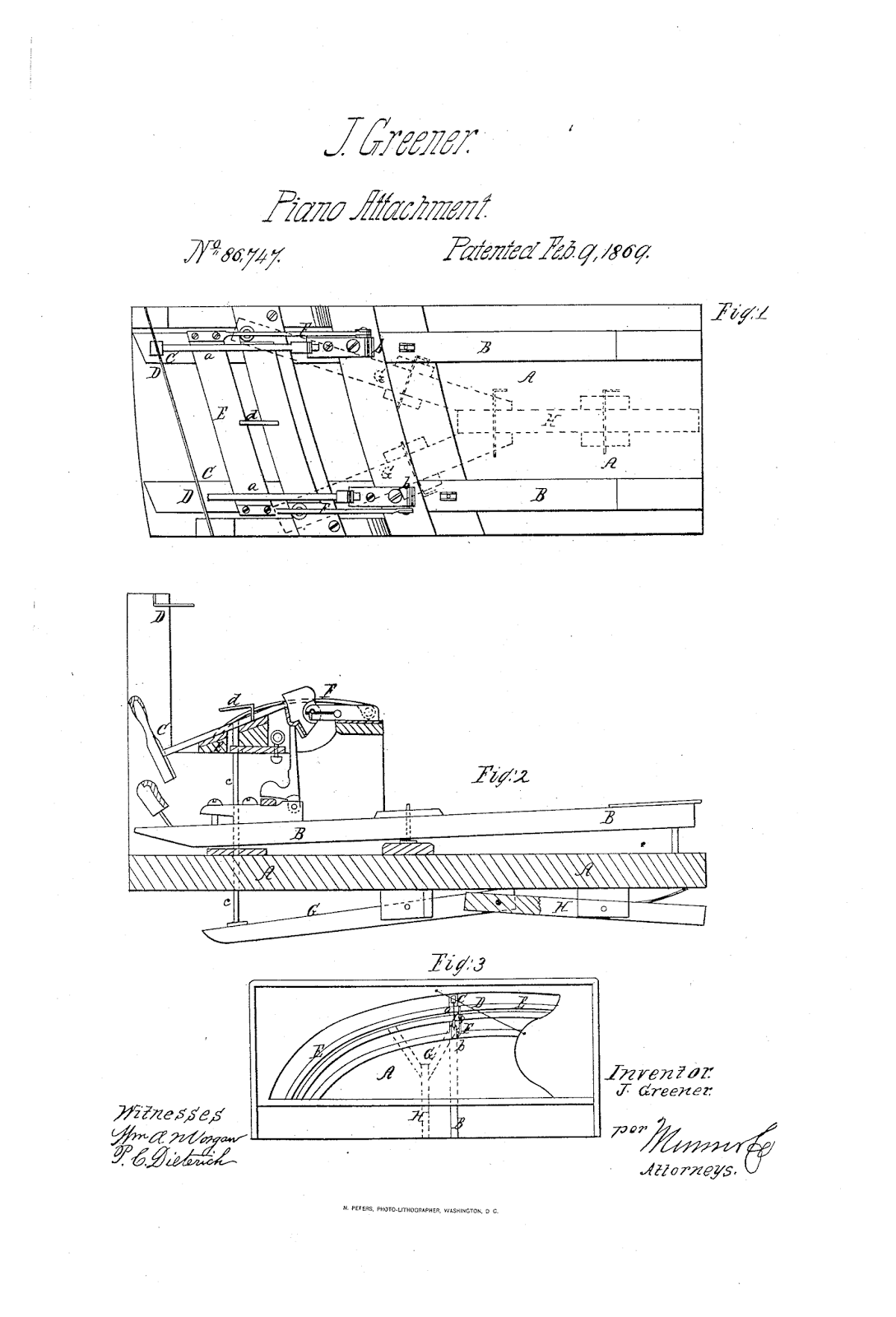 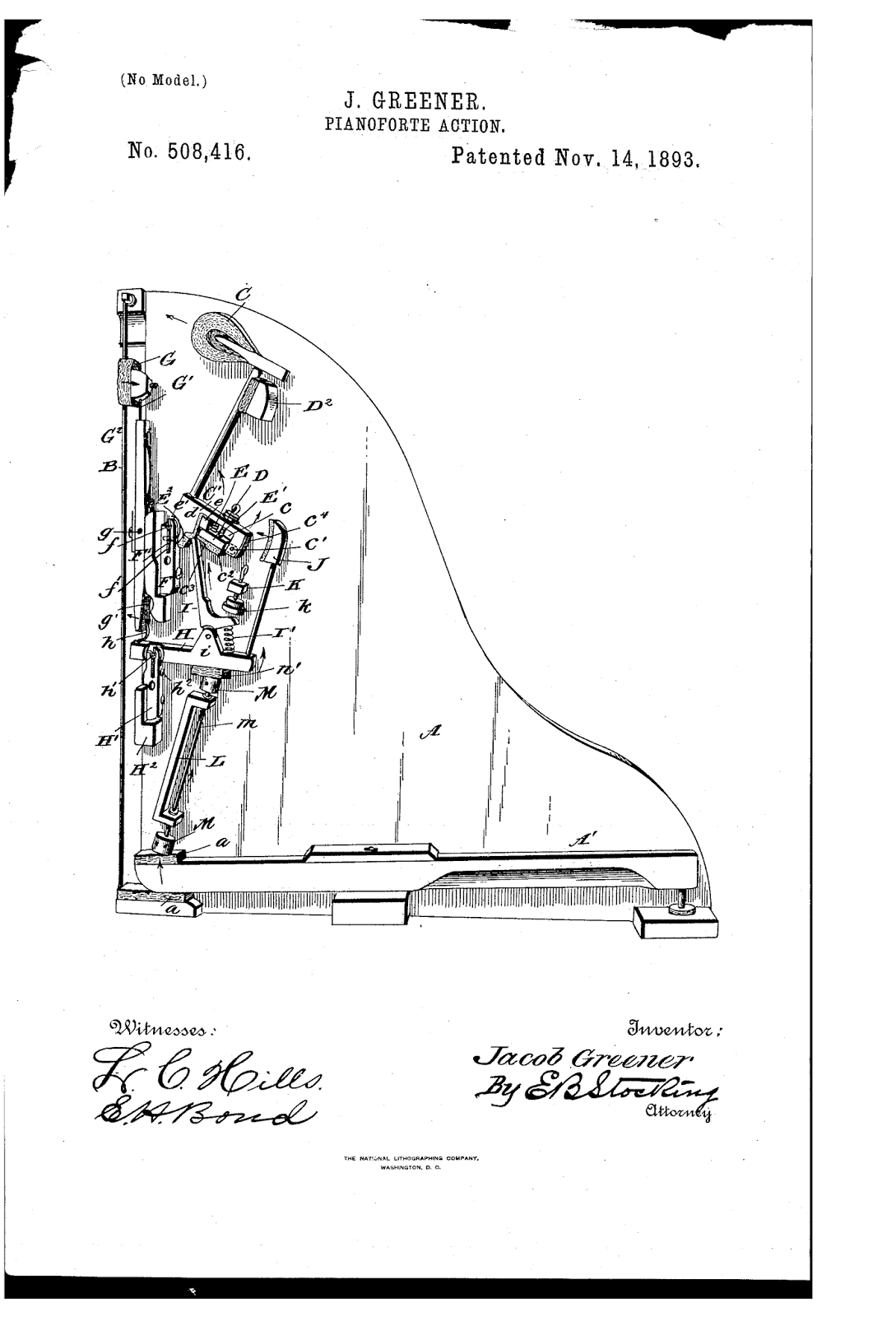 Greener's business continued into the 2oth century, but people's musical needs and desires changed as time passed.  The great piano era of the 19th century began to wane as new technology made producing music cheaper, easier, and more egalitarian.  Home pianos were replaced by player pianos, phonographs, and later, radios.  The bulky, expensive pianos that required skill to use became a tougher sell.  Greener undoubtedly recognized this and shifted his business model to accommodate these changes.  He stopped manufacturing pianos and instead focused solely on retail.  He also sold other instruments.  His son Augustus, who worked in the family business, was a talented musician who made violins.
Greener was locally beloved and he frequently gave pianos and organs to local organizations, including the tuberculosis sanitarium.  He stayed active in his business until he died in 1916 at almost 92 years old.  The community mourned the death of the old piano man.  Greener's son Augustus continued the business until it closed in 1930.  In the entire life of the business, Greener produced 670 pianos (although he sold many more that he didn't manufacture).  Each piano was hand-made.  The closing notice in the news read, "Overtones of ghostly music by great masters now seem to haunt the buildings which Jacob Greener...made the pride of musical Elmira."

In 1937, the old factory was demolished to make room for an addition to the LeValley-McLeod-Kinkaid building.  Augustus gave an incredibly sad interview in the newspaper; the demolition of the building was a devastating event.  He died the following year.
Greener's piano store is like the history of many other Elmira, and American, businesses.  Despite adaptations that business owners make, most companies eventually end.  Ultimately, "the machine age spelled the doom of the old workshop."

Posted by Chemung County Historical Society at 6:09 AM