In the 1830s, weavers in Southport made wonderful blue and white coverlet. They were double-woven so one side is dark and the other side is light and they were usually made of a combination of wool and cotton or linen. The fancy weaving was done on a hand loom with a Jacquard attachment that used punched cards to produce intricate designs including flowers and leaves, geometric patterns, animals, and buildings. Many of the coverlets include a name, the year, and “Southport” in the corner block. There were at least seven weavers in Southport doing this type of work in the early 19th century. 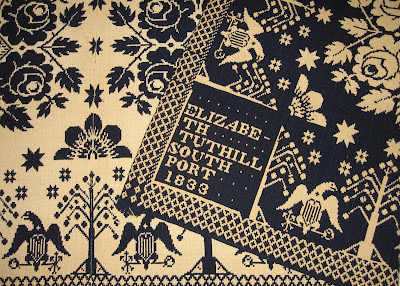 The first woolen factory in Southport was built around 1821 by Silas Billings. It was one of the first such factories in the county. In 1825, Billings sold the mill to Solomon L. Smith. Soon after that, Charles Evans came to Southport and got involved in the business. He purchased the factory in 1844 and operated it until June 25, 1877 when it burned to the ground. At the time it burned, the mill was the oldest manufacturing establishment in town. Evans lived out his days in Southport and passed away in February of 1882 at the age of 83. 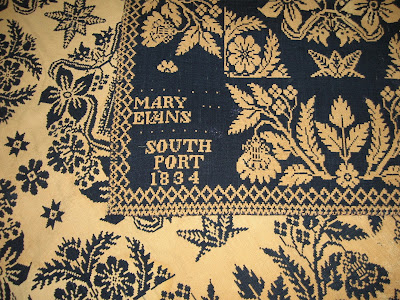 There was also a wool carding and fulling mill on Seeley Creek. It was built by Philo Jones in 1829 and started operating in 1830. He sold the mill to his brother Simeon R. Jones in 1843 who operated it for another five years. In 1848 he sold the machinery to William Benedict who moved the operation to Wysox, Pennsylvania.

Not only were factories in Southport processing wool, they were also producing fabric. Fancy weaving was a fairly common trade in Southport in the 1830s. Charles Evans was in the fancy weaving business from 1834 until 1837 but he was not without competition. J.S. Baker, C.S. Baker, S.G. Stryker, and a Mr. Tuttle were also producing fancy woven coverlets at that time. Jonathan Conger and David Pollay were half-brothers who grew up in Groton, New York and who both took up the trade of fancy weaving in Southport in the 1830s.

Jonathan Conger came to Southport around 1837 and operated as a fancy weaver until 1839. That year, he advertised in the Elmira Star Gazette that he “wove ingrain carpet and Venetian Carpets, Double Carpet and Float work Coverlets.” He stayed in Southport at least through the early 1840s before moving back to Groton.

David Pollay learned how to weave from Jonathan Conger. Pollay moved to Southport sometime in the mid-1830s and did fancy weaving for a time. For some reason, he gave up weaving and went into carpentry. Around 1843 he relocated to Hammondsport where he apparently went back into the weaving business. 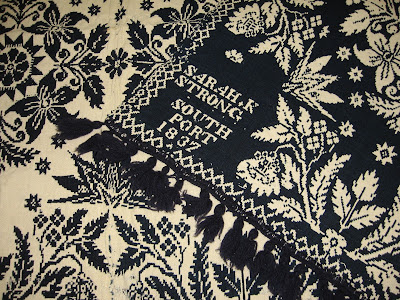 Posted by Chemung County Historical Society at 5:56 AM