I wrote a book. Curiosities of Elmira came out last Monday, and if you'll forgive me indulging in a bit of shameless self-promotion, I'd like to tell you a bit about it how it all came about. 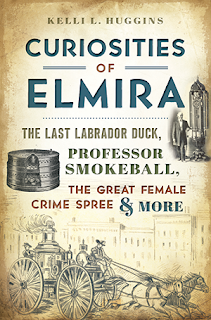 Curiosities of Elmira was a surprise opportunity for me. I was in the beginning stages of another book project (feel free to ask me about that project another time- it involves fun stories about train-riding dogs in the late 19th century), but was at a bit of a standstill. Then I got an email. A mentor and friend of mine had gotten a request to write a book for The History Press, but it wasn't something she had time for. So she mentioned my name to them and said that I might be interested in a project. It was as simple and serendipitous as that.

After exchanging a bunch of emails with the acquiring editor, we decided that given my penchant for historical oddities, I would write a book in their Curiosities series. I submitted a proposal, including a tentative outline of chapters, and when that was accepted by the publishing board, I was ready to go. Approval came in January 2016.

Then the hard part started. My manuscript (all 35,000+ words of it) was due in September. So in about 8 months, I wrote the book. It was a tight timeline, but fortunately, through my work at the museum over the past 3+ years, I'd already done a bunch of the legwork and research for the stories. When the manuscript was submitted in September 2016, then we went through a whirlwind of edits, cover design, marketing plans, etc.

And that brings us to now. I hope that as someone who is already reading our blog, this book will have some stories that will interest you. In fact, you may recognize some of the stories in the book as things that first debuted on this blog! The book gives far more expanded versions of stories about Henry Clum, DeHollis and Valora, Edgar Philo, and more. And then there are lots of other stories that I haven't told anywhere else. The book covers a wide-range of topics, including chapters about important inventors, unusual crimes, weird animal stories, the supernatural, and forgotten famous Elmirans. Long-time blog readers and folks who know me pretty well know that I love a good strange story. Writing this book gave me an opportunity to celebrate some of the weirdest and most colorful people and events in our local history.

Curiosities of Elmira is available at CCHS, from me (email me at educator@chemungvalleymuseum.org or call me at 607-734-4167 ext. 205), at local retailers, and online. I'm proud of my first book and I hope that you pick up a copy. I'll also be doing some book signings and talks, starting with one at CCHS on Wednesday, March 29, from 5:30-7pm. I'll be sharing more about the stories in the book-- and some things that I regrettably had to cut!