I was reading through the Elmira Republican & General Advertiser from 1836 the other day when I found an unusual notice.

Aside from the bit about not trusting the boy on the subscriber’s account, it is disturbingly similar to notices for missing livestock. 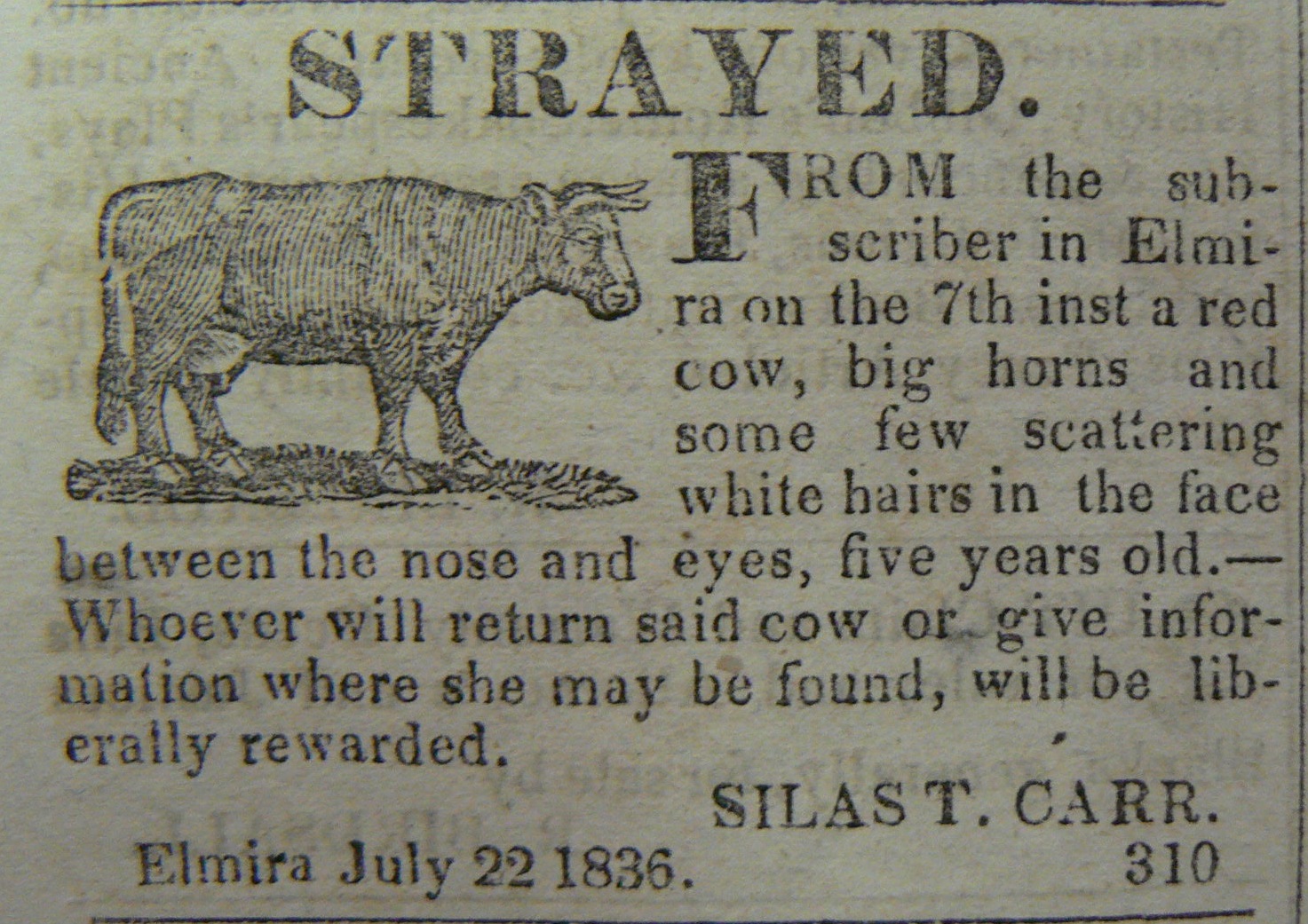 Who was this Gilbert Wilcox kid and why was Jeremiah Hall advertising his disappearance like he was a missing cow? The notice itself gives us some clues. Gilbert Wilcox, age about 13, was an indentured laborer belonging to Jeremiah Hall and, when I say belonging, I mean that literally. Mr. Hall had some sort of legal contract granting him temporary ownership of Gilbert and his unpaid labor for a set period of years. People in this position were sometimes called indentured servants, bond boys, or bound or indentured apprentices.

There is a long history of indentured servitude in this country. Before the American Revolution, over 60% of all immigrants from the British Isle came as indentured servants. Too poor to afford the cost of the journey, they would sell themselves to ships’ captains who would then auction them off at the docks. The average cost of the voyage was £10 to be paid off over a period of servitude ranging from 3 to 7 years. The law offered no protections against cruel or abusive masters and it was not unusual for unhappy indentured servants to try to run. Although some states promised former indentured servants free land along the frontier, most began their free lives in America utterly destitute. The expansion of the slave trade in early 1800s spelled the end of large-scale indentured immigration, although it persists to this day, especially among the undocumented.

Native-born Americans might have indentured themselves or their children for any number of reasons. In New York State, the children of enslaved Blacks born after July 4, 1799 were technically free, but indentured to their mother’s owners until their 25th (for females) or 28th (for males) birthday. In 1817, the state abolished slavery altogether effective on July 4, 1827. Since Gilbert Wilcox was 13 in 1836, it is possible he could be the indentured child of a Black woman who was still enslaved at the time of his birth. On the other hand, he could also be the son of an impoverished white family who indentured him in exchange for a debt forgiveness or a lump sum payment. Some families also indentured their sons to tradesmen so that they might learn said trade.

There are no good statistics on the numbers of indentured servants who lived and worked in Chemung County, but they were there since the beginning of white settlement. John Hendy, the first white man to plant corn in what is now the Town of Elmira, did so with the help of his bond boy, Dan Hill, in the spring of 1788.  There were at least two other indentured servants living in Elmira in 1836. We know because there are runaway notices for them too. I haven’t been able to find what happened to any of them, but I like to imagine they lived the rest of their lives happy and free. 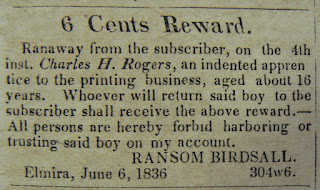 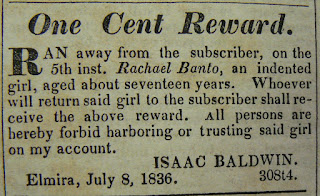 Posted by Chemung County Historical Society at 6:30 AM