Just Phoning It In

“What hath God wrought” were the first words transmitted across American telegraph lines in 1844. Twenty-two years later, the first words clearly transmitted across American phone lines “Mr. Watson, come here. I want to see you,” were a little less impressive, but no less momentous. The telephone’s inventor, Alexander Graham Bell, gave his first public demonstration at the Centennial Exposition in Philadelphia a few months later in June 1876. Two years later, the first American public telephone exchange was set up in New Haven, Connecticut.

Elmira’s first telephone exchange opened in 1880. Most of the 48 original subscribers were area business including six grocers, four railroads, and one newspaper. According to the first list of subscribers published by the Elmira Bell Telephone Exchange on February 1, 1880, they were installing so many new phones that they would have to publish an updated list with 20 additional subscribers on the 15th. 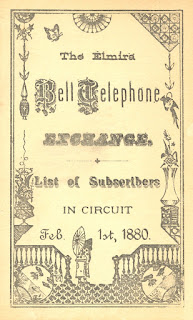 Like most early exchanges, subscribers relied on operators to manually connect them to the people they were calling. Callers would tell the operator who they were trying to reach, either by their exchange-assigned number or by name, and then the operator would literally connect them by plugging the caller’s line directly into the recipient’s on the switchboard. Switchboard operators were all women. In the early days, they received on-the-job training. In 1902, New York Telephone Company opened the first operators’ training school in New York City and later opened up regional schools in the 1920s.

Rural telephone exchanges operated on a slightly different system. While the Elmira exchange provided power to city phones via a central battery, Southport Telephone Company subscribers had to hand crank their phone’s battery in order to reach the operator. Southport subscribers had what was called a party line which they shared with multiple customers. Callers were instructed to keep their calls to five minutes or less so as not to tie up the line. Because anyone on the party line could listen in, eaves dropping by nosy neighbors was a big problem. In some parts of the country, party lines persisted well into the 1990s.

On May 21, 1932, the Elmira exchange converted to dial service. Now callers could input the recipient’s number directly via a rotary dial phone rather than get an operator to connect them. In the run-up to the conversion, New York Telephone Company replaced each phone in the city and gave each subscriber a new number. But what if customers didn’t know the number of the person they were trying to reach? Well, that’s what phone books were for.
Posted by Chemung County Historical Society at 6:30 AM