The other day, our curator Erin Doane commented how she always liked the photograph below, which depicts the 1920-1921 Chemung County Board of Supervisors. 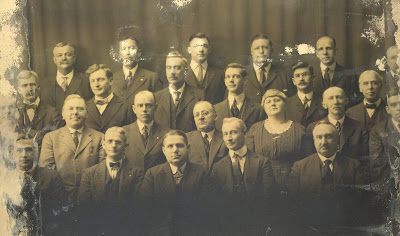 We chatted about it, wondering who the lone woman in the group was. Since this photo was taken just a couple of years after women got the vote, we wondered if she might be the first elected woman in Chemung County politics. I took on the task of tracking her down and I learned that her name was Marie Carr Fraser. Carr Fraser’s own history is interesting and is outlined below, but she was actually just one of several local women who sought to exercise their new political rights by running for office.

Minnie Clark was Chemung County’s pioneer female politician. In 1911, years before women won the vote in New York, Clark’s name was submitted on a certificate of nomination for the Socialist ticket for supervisor of Elmira’s tenth ward. The nomination proved a “puzzler” for the election commissioners, so they called in County Attorney Thurston. Thurston told Clark that she would not be able to serve even if she was elected. According to his interpretation of the law, “only an ‘elector’ can be elected to office, and the law says that an ‘elector’ must be a member of the male sex.” With this legal blow, Clark’s name was removed from the nomination.

That wasn’t Clark’s last attempt to get into politics. After the successful New York suffrage campaign, Clark was the first Chemung County woman to enroll in a political party. She registered as a Socialist. By mid-June 1918, there were 1,411 Elmira women registered to vote. She also was credited as the first woman to run for office in the county (this wasn’t taking into account her failed 1911 nomination). In 1918, she ran on the Socialist ticket for Chemung County Sheriff.  She never had any real shot at winning, but at least the process wasn’t a financial drain for her; she claimed she spent only $1 on her campaign.

Marie Carr Fraser was an 1895 graduate of Elmira College and was a well-known soprano and voice teacher who gave countless local performances. She was a widowed mother of a young daughter and was very active in the community.
In July 1919, Democrats in Elmira’s seventh ward nominated Marie Carr Fraser as their candidate for the upcoming election to represent the ward on the Chemung County Board of Supervisors. Carr Fraser was a Prohibitionist, and her nomination was seen as a way to siphon voters who felt strongly about that issue.

Carr Fraser ran against Republican Nelson Powell. Each candidate, regardless of party, sought the Prohibition ticket nomination, showing how significant the “dry” issue was in that election. In the September primaries, Carr Fraser won the Prohibition endorsement over Powell, despite the fact that historically, the city’s Prohibitionists had voted Republican.

Carr Fraser wasn’t the only woman in the supervisor race that year. Jane W. Gillett, on the Prohibitionist ticket, and Mary Painton, on the Democratic ticket, opposed incumbent Dana L. Smith in the ninth ward. When the election results were in, Carr Fraser won, earning the distinction of being the first woman ever elected as a member of the Chemung County Board of Supervisors. Gillett and Painton both lost their bids in the ninth ward. Carr Fraser took her seat on the Board and was soon named to the Committee for County Home Improvements.

Coming off her two-year term as supervisor, Carr Fraser ran for Chemung County Clerk on the Democratic ticket. Her campaign ads, pictured below, highlighted her role as a mother. 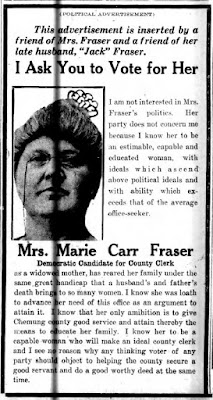 She opposed Asaph B. Hall, the Republican candidate, and Robert Weaver, the Socialist candidate. Hall, a popular young World War I veteran, was a tough opponent (Hall also later served as the president of the Chemung County Historical Society). When the election was over, Carr Fraser lost to Hall. Hall secured 14, 177 votes to her 9,727. Weaver came in a distant third, with 304 votes.
Clark and Carr Fraser weren’t the only early female candidates. Decades before, in 1892, Myra L. Daggett made “a lively canvas for office” for the school commissionership of school district No. 2. Mrs. George Pickering lost the election for that same post in 1920, in part due to rumors that she was a Socialist. She denied any affiliation with that party.  In 1919, May Stewart ran for Alderman in Elmira’s first ward, but lost to Fred West. Celia O. Hoke, won the most votes of any candidate in the 1925 primaries in her reelection campaign for the position of County Superintendent of the Poor. These women were just some of the pioneers who paved the way for more Chemung County women to seek elected office in the ensuing decades.
Posted by Chemung County Historical Society at 3:00 AM