The Nudes in the Directory

A couple years ago, one of my coworkers stumbled across an advertisement for Van Patten Plumbing and Heating Co. in a 1930s Elmira City Directory featuring a nude woman in the bath. We thought it was a little bizarre, not because we are particularly prudish, but because the city directory is a publication with all of the eroticism of a phone book. While the images aren’t terribly explicit (your definitions may vary), the directory really isn’t the place you’d expect to see a nude photograph of any kind. Now, I have finally gotten around to investigating the mystery of the nudes in the directory.
First, I headed back to the directories themselves. I found the image above only in the 1935 Elmira directory. It is the first Van Patten nude advertisement, but not the last. In the years prior, from 1929 to 1934, they ran the far more wholesome image below.

There was no advertisement for the company in the 1936 directory, but 1937 brought a new nude photo. The advertisement below, however, had a longer run than its naked predecessor did. It ran in the 1937, 1939, 1941, and 1942 directories (the company didn’t run any directory ads in 1938 or 1940).
After those ads, the company’s next was in 1944, which was just the plain text below. They didn’t publish any more images, nudes or otherwise. 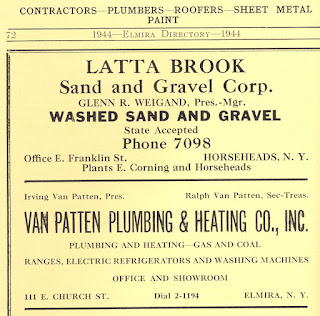 Now I had found that the nude photos were actually in FIVE directories. I had so many questions: Why did they choose to run these? What was this company’s reputation? What was the public response? Was this typical?

I started by looking for information about Van Patten Plumbing and Heating. What I found was horribly regular. Far from having any kind of deviant public reputation, Van Patten seemed to be a pretty typical heating and plumbing firm of the time. I found information on construction bids they won and lost. I found members of the family who were having birthday parties or starring in school plays. That was it.
There seemed to be no press mention of the nude photos. Nothing. And the company’s newspaper ads from the time were far more clothed. These ads all showed stylish women, in full-dress, selling washing machines. These model housewives were not just shilling appliances, but also the dream that every regular Elmira housewife could also attain the level of glamour that only high-quality refrigerator can bring a woman.
So why did they run this ad if they weren’t some edgy company that wanted to make old ladies blush as they thumbed through the yellow pages looking for church listings? One theory I had was that they did it to attract attention. Remember, in 1935, the country was in the midst of the Great Depression. Construction work could be hard to come by. Maybe this ad was a ploy to get more eyes on their ads than their competitors. Hey, lecherous money spends the same!
There might be some merit to this theory. Van Patten and other plumbing outfits were feeling the pressure. In April 1935, Van Patten joined other appliance sales firms in protest of the Elmira Light, Heat & Power Corporation’s new system of allowing patrons to purchase appliances from them with installment payments. They believed that the utility company was unfairly undercutting them. That combined with the Depression, the coffers were likely low.

Another possibility is that perhaps the newspaper and directory ads, with their stark differences in stark nakedness, were intended for different audiences. The newspaper ads are clearly selling women on the appliances they were expected to be using every day. I’m not sure that plumbing and bath fixtures are intrinsically more masculine than refrigerators, but maybe they had reason to believe that titillated men bought more tubs than housewives. Also, with a price tag of $10 each in 1935 (when the first photo ran) and $12 in 1941 (the last year for the photos), the audience for the directory would have been smaller than the newspaper. Folks struggling to feed themselves in the midst of the Depression wouldn’t likely shell out that sum for a book that was only good for a year, nudie pics or not.

The next thing I considered was the maker of the photographs. These were not images commissioned or taken by the folks at Van Patten. Instead, these were advertising images from American Standard (then as the Standard Sanitary Plumbing division). None of the company’s other illustrated or photograph advertisements that I can find online approach the level of nakedness of these two. This made me wonder then if these ads were even supposed to be made public. Were these actually the 1930s equivalent of the posters and calendars you see at the mechanic with nude women splayed across sports cars and posing seductively with power tools?

With that information, it was now time for me to do some more research about attitudes towards nudity during the 1930s. I knew that the Hays Code kicked into full enforcement in 1934, sanitizing the film industry, which up to that point had been pretty open to gratuitous nudity. It didn’t really apply to print, but given the timing of the first nude ad, I wondered if the Van Pattens were sending a political middle finger to the Hollywood prudes. Probably not, but I like the thought.
In fact, with a little more digging, I found that female nudity in print ads was pretty common around this time and it was intended for both male and female consumers. A 1936 Woodbury’s Soap ad is recognized by experts as one of the first (some recognize it as the first, but that is untrue given that these Van Patten ads start in 1935). In his book The Erotic History of Advertising, Tom Reichert discusses how companies used nude models, but didn’t show nipples or genital. These more benign nudes show up in advertisements in major magazines, like Ladies’ Home Journal and Good Housekeeping, suggesting that the average consumer was not offended by a little butt cheek. For women, the nudes could be an aspirational model of beauty, which is just what the soap companies wanted them to think (some things never change). Trade magazines, however, were a different story. Because they were targeted at a male audience, the nudes in these publications were more explicit (though not by modern standards).

If you’re still reading this at this point, I wish I had some big historical reveal (pun intended) for you. In short, the real story seems to be some combination of the reasoning I’ve outlined above. What is the most interesting thing for me is that the 1935 ad seems to be one of the first known nude advertisement of its kind from this era. So really, Standard Sanitary and Van Patten were a little ahead of their time. The strange little nudes in the directory might actually be quite historically significant.