The Seven Muses of Elmira 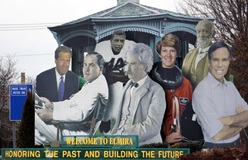 The slogan “Welcome to Elmira: Honoring the Past and Building the Future” is at the bottom, and behind the figures is an image of Samuel Clemens’s distinctive octagon study now located on the Elmira College campus. This slogan was selected from a contest that had over 600 entries, and is a combination of three of those submissions. They were sent in by Marlin B. Stewart from Elmira, Alan and Barbara Hutchinson from Elmira, and James M. Lloyd of Horseheads.

Installed in February 2004, the $40,000 sign replaced a more generic welcome sign. That sign had a stylized glider, road and hills. It had been originally installed in 1986, and refurbished in 1994.

The current sign puts a face on Elmira by honoring famous people in the city’s history. They’re not identified on the sign, and today not all visitors, newcomers, or children know who they are, and what they represent.

In the back row, left to right:

In the front row, left to right:

In 2015, a controversy arose around the sign when newscaster Brian Williams, the figure on the far left, was discovered to have fabricated some of his own history. People in the area questioned his suitability on the sign as a person Elmira would or should be proud of.

NBC suspended Williams without pay for six months, relieving him from his position as Managing Editor and Anchor of NBS’s Nightly News. In June of that year, he was demoted to breaking news anchor for MSNBC. Two months later he was promoted to be MSNBC’s chief anchor, and today he set to co-anchor the network’s coverage of the upcoming 2020 United States Presidential election.

It was determined that editing Williams off the sign would just damage it. Addressing the controversy, Elmira’s mayor in 2015 responded "After examining our sign in its entirety, I find that it is showing its age. So it is possible that the whole sign may come down for that reason only." Five years later, the 3,000 lb. sign remains as it was originally installed.

In August 2019, local news reported that Elmira’s City Manager was aware the sign was showing signs of wear.
Posted by Chemung County Historical Society at 5:26 AM