Serious Thoughts on a Ridiculous Photograph 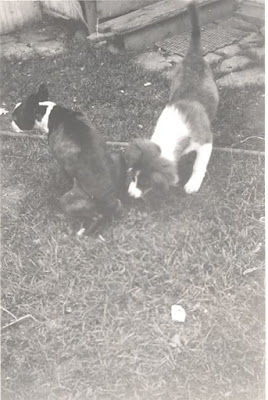 I think that the photograph above is one of the most remarkable pieces in our collection.  Yes, I’m serious.  While on the surface this photo is a little crass, allow me to explain just how unique this piece is.  In other words, this is my attempt to write a mature, thoughtful blog post about one of our most immature collection items.
The photograph is a part of our collection of materials from Charles Whipple, a Horseheads resident.  We have his diaries, photographs, and other assorted documents.  Tucked in amongst these items is the photograph in question.  There are several photographs of these two dogs, showing them around the yard and in the home (and even on the bed).  The photos are dated 1948. 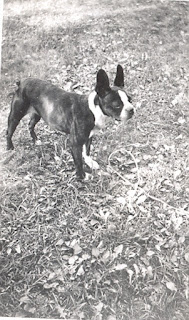 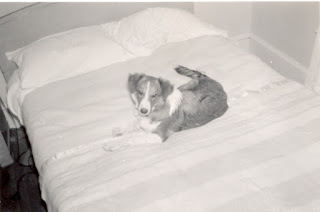 This collection is a lovely glimpse at mid-century pet keeping.  Candid photos like these give us a better understanding of how our relationships with our pets have changed and stayed the same over time.  Like Whipple, people today take pictures of their animals playing, sleeping, or being otherwise adorable. 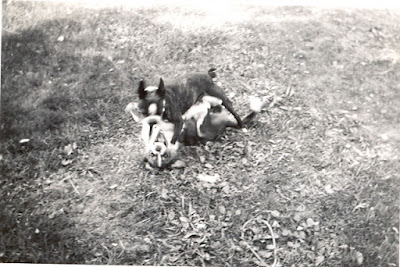 The dogs look well loved.  But still, the first picture is special.
First, it is remarkable that this photograph was even taken.  Photographic technology had made great strides in portability and affordability by the 1940s, but film was still a valuable resource.  There were families that took few photos of their children in the 1940s, much less their dogs.  So that someone would use a frame on this scene (and also the fact that they had a camera handy when this went down) is noteworthy.  And, not only was the picture taken, it was developed.
Someone cared enough about this photo to date it on the back (many of the other photos in the collection are not dated).  They also kept it.  Maybe it became a family joke. Eventually, the photograph was donated to the museum in 2009 as a part of the much larger Reverend Donald Roe collection (Whipple was Roe’s parishioner and his possessions were left in Roe's care after his death, thus adding another layer of improbability to the survival of this photograph).
It is impressive that this small, silly photograph exists.  While it is not typically what most people would deem museum-worthy, I think that it is because it's a great reminder that people in the past were very much like us.  And if anything, this photo shows us that poop jokes have always been funny.
Posted by Chemung County Historical Society at 6:23 AM