The Fascinating History of Garbage in Chemung County

While doing research for our new exhibit “Clean,” to my surprise, I became very invested in learning about the history of garbage and sewage disposal in the county (I’ll save sewage for another time).  These aren’t my usual types of topics, but these histories are full of drama and conflict, and I was hooked.  So even though it might sound boring, stay with me.  I’ll try to make you a trash history convert as well.

In the 1800s, there was very little municipal garbage removal, so most people threw their unwanted refuse into the streets.  Pigs roamed the streets eating trash and rag pickers and bone collectors gather unwanted scraps from residents.   In 1905, Elmira councilmen began to look for a better solution and sought a site to build an $18,000 garbage incinerator. Local protests stopped the city from doing this and the Bennett Incinerating Co., a private company, took on garbage collection.  Their services, however, were expensive and limited.
A more novel solution was offered up in 1918: a piggery.   The Murphy Process Co. of Buffalo proposed a piggery in Elmira to feed trash to pigs, claiming the city could then sell fattened pigs for a profit.  Elmira officials signed the contract but quickly gathered more garbage than the pigs could eat.  As smelly trash piled up on the Southside by the piggery, people protested and company went bankrupt.   The city tried to take over the piggery but it was too expensive.  Instead, they began burying garbage on a farm, City Farm, purchased just outside of the city limits.

A 1926 fire at the City Farm dump sent clouds of smelly smoke over city and reignited calls for a garbage incinerator. Residents of 8th ward complained the garbage dump at City Farm depreciated their property values and supported an incinerator.  The incinerator was built in 1929 and was estimated to cost the city $150,000.  Its two brick-lined furnaces burned trash at a temperature of 1,600-1,900 degrees, processed 10,000 tons of refuse in 1931 at cost of $1.05 per ton, and employed 12 people.
In November 1968, Elmira terminated operations at its refuse incinerator and an open burning site. The old incinerator layout was not conducive to mechanization and there was too much air pollution with open burns. The city switched to landfills.  The 1969 Chemung County Solid Waste Disposal Study estimated that Chemung County residents would discard 175 million pounds of garbage that year alone.  They also estimated the following trash production figures:
- Ashland, Baldwin, Catlin, Chemung, Erin, Van Etten, and Veteran- 900 lbs per capita in 1970
-City and Town of Elmira- 1,500 lbs per capita in 1970
- Horseheads- 2,500 lbs (because of industrial waste) per capita in 1970
-Big Flats- 1,200 lbs per capita in 1970
-Projected that County would need 792.3 acres of landfills by 2020

In December 1973, The Chemung County Solid Waste Facility opened to shred and compact refuse to transport to landfill. The landfill was set on 139 acres in Town of Chemung and was given an estimated 20 year lifespan.  That changed on January 22, 1979 when an explosion in the shredders extensively damaged the facility.  It took three years to get the shredders operating again.  In the meantime, the County dumped unshredded trash into the landfill, significantly lessening its lifespan.  In August 1981 the shredders at the Waste Facility went back in action and gas detectors were installed to prevent future issues.  The county then had to look for space to expand the landfill. 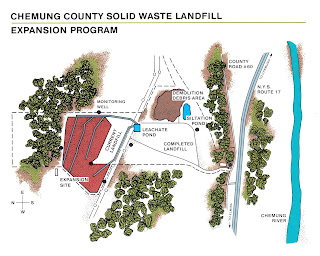 In 1991, Chemung County Solid Waste opened a 22,000 square foot recycling center off Lake Road as a part of a $5.5 million commitment to recycling. 75 tons of 27 types of recyclables could be processed each day.  By 1994, Chemung County recycled 29% of its trash, not including bottles (the New York State average was only 16%).  It was estimated that by 2001, the recycling efforts had already removed 85,000 tons of materials that would have been put in the landfill. 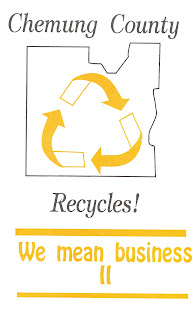 Garbage is still a hot button issue for people in the county.  In 2012, Elmira got garbage trucks that have separate compactors for trash and recyclables on one truck.  Recently, Elmira mandated that all trash be put out in only clear bags, causing ire amongst some residents.  Still, Chemung County’s long trash history reminds us that there are no easy solutions to trash removal, particularly as we produce more and more each year.

Posted by Chemung County Historical Society at 6:06 AM