On November 5, 1945 the Wings of Victory Airmada buzzed over the city of Elmira. The fleet of ten warplanes landed at the Chemung County Airport and prepared for a three-day event celebrating the Victory Bond campaign. At the conclusion of the event, two airplanes collided. Both were destroyed and six men lost their lives.

The Wings of Victory Airmada was a joint operation of the U.S. War and Treasury Departments following World War II. Its mission was to promote the Victory Bond campaign. It was one of several fleets touring the country. The Airmada assembled at the Rome Army Base at the end of October and flew to Rochester and Buffalo before coming to Big Flats on November 5. It was supposed to move on to Stewart Field at West Point after visiting Chemung County.

Maj. Philip D. Wachtel Jr. of Truax Field, Madison, Wisconsin was Commander of the fleet of fourteen military aircrafts. Because of the length of the air field in Big Flats, only ten of the planes could land: B-17 Flying Fortress, B-25 Mitchell, A-26 Invader, P-51 Mustang, P-47 Thunderbolt, P-38 Lightning, C-46 Commando transport, C-47 Skytrain transport, AT-6 Texan trainer, and CG-10 cargo glider. The 34 members of the Airmada’s crew were assembled from eight airfields throughout the country. Most of them had served overseas and been in combat.

The Airmada spent two full days on the ground at the airport, offering tours to the thousands of people who visited. “With the lid off on military secrecy,” as a Star-Gazette reporter put it, visitors could see “many instruments and devices which put the real dent in the Axis powers.” Airmen played tour guides, opening up cargo ships and inviting people to step inside. Of particular interest was the P-38 reconnaissance ship which had five huge cameras, one in the nose, two on each side, and two beneath, to capture various views of the enemy.

While nearly 10,000 people got to explore the airplanes, the main purpose of the Airmada was to raise money through Victory Bonds. Capt. Henry N. Hamington, pilot of the B-17 Flying Fortress, and Capt. Bedford B. Riggan, pilot of the C-47 cargo ship, spoke to a large gathering of employees at Remington Rand. They shared battle stories and urged people to buy bonds “to clinch the peace.” The cargo glider was transformed into a Victory Bond booth on the airfield. The Minute Maids, “the trim special event sales girls,” handed out bond order blanks and signed people up for subscriptions. At the end of the second day of the event, the glider was towed over to Schweizer Aircraft Corp where the employees there held a bond rally around it.

The Airmada had a successful fundraising visit to Chemung County. Fifty-five county businesses and countless individuals subscribed to Victory Bonds, exceeding the quota and setting the campaign well on its way to meeting its $1.3 million goal. But as the fleet was leaving on Thursday morning, November 8, tragedy struck.

At around 10:30am, as the fleet was taking off to leave, the P-47 Thunderbolt fighter and the B-25 Mitchell bomber collided in midair and burst into flames. The five crewmen of the B-25 and the pilot of the P-47 were killed and debris was strewn over more than 20 acres at the north end of the airport’s north-south runway. Fortunately, the crash occurred far enough away from the nearly 100 spectators who had gathered that none were injured.

Eyewitnesses told the Star-Gazette that the P-47 appeared to be trying to come into formation with the B-25 when it crashed into the bomber. An experienced combat pilot who was there did not think that the pilot of the fighter actually saw the other plane. The blunt nose and forward-set wings of the P-47 may have obstructed his view. Members of the Army Air Forces Board of Inquiry from the Rome Air Base arrived that afternoon to conduct an investigation but I never found a report in the press.

Posted by Chemung County Historical Society at 5:41 AM No comments:

Votes for Women! (Step in Time)

Over this past weekend, nearly a million women across America marched across the country to commemorate the 2017 Women’s March on Washington and advocate for women’s rights.  We were supposed to join them here in Elmira, but the march was postponed due to bad weather. Come to Wisner Park next Sunday, January 27th, to hear speeches and march to Cowels Hall at Elmira College in support of women’s rights.

The 2019 march will not be Elmira’s first (and hopefully not the last) women’s march. In March 1913, a group of women from the Chemung County Equal Suffrage League met at Elmira City Hall to start planning a suffrage parade. As someone who just helped to organize a women’s march, I can assure you that is a job of work and they probably should have started earlier. The group selected Frances Farrar, a local artist and teacher, to chair the parade committee.

1913 was the summer of women’s suffrage parades throughout the state. The kick off was a march of approximately 20,000 women in New York City on May 3rd. It was soon followed by smaller parades in Mineola, Mount Vernon, Newburgh, Albany, Utica, Rochester, Monticello, and Syracuse. The run-up to the Elmira event began with notices in state-wide suffrage publications and articles in the local paper. Participants were encouraged to sign up in advance so organizers could establish the order of march beforehand.

On Saturday, June 21st, the ladies began to march around 3pm. They were led by nationally-renowned suffragist activist “General” Rosalie Jones. The year before, Jones had famously led over 200 women on a 13-day, 175-mile march from Manhattan to Albany. She had been involved in several of the other marches across the state that summer and went on to lead another march the following day in Binghamton. Behind Jones came a platoon of police and Foster’s Band, followed by the parade committee. Next came the Elmira College girls in their caps and gowns, followed by delegations of women dressed in Suffragist Party yellow from across the state, with large groups from Bath, Hornell, and Geneva. Some of the women wore large stars on their foreheads and carried placards with the names of states which had already granted women the vote.


There were also a number of floats. Miss Democracy rode in the big Democratic Party float, which was covered in pro-suffrage banners featuring the Democratic donkey. The Prohibition Party manned a float as well. Members from the Women Christian Temperance Union and the Young People’s Branch of the L.T.L. drove behind in cars. The exact number of marchers was unknown, but the Elmira Telegram reported that thousands were in attendance.


The parade went all through the downtown business district before ending in Wisner Park. “General” Rosalie Jones gave the closing address before the group disbanded. She later told reporters:

“Never at any other parade was more respect shown to the marchers than in this city. It was remarkable that although thousands of people were lined up along all the streets through which we marched, there was not one jeer, not one thing said to which any of the marchers could take exception. I wish to thank the people of this city for their kindness.”


Posted by Chemung County Historical Society at 6:00 AM No comments:

[Staff Note: CCHS was pleased to work with Mr. Liquori and his students in the creation of the exhibit Flood of ’72 which is currently on display here at the museum. The exhibit was created entirely by a team of 44 6th-grade students at Horseheads Intermediate School. The students researched the historic flood, selected the photographs, and wrote the text labels with the help of Mr. Liquori who brought it all together and designed the exhibit panels. The Chemung County Historical Society is proud of their hard work and dedication to local history. Flood of ’72 is on display now through Saturday, February 16, 2019] 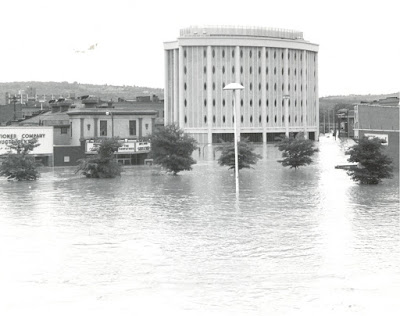 When I ask survivors what they remember most about the flood of 1972, it’s almost always the smell of the mud and water during cleanup following the disaster. However, there was so much of our own community that was impacted and often those stories go untold in the larger picture of the flood history. Even more, there are now new generations of people—children, grandchildren, and even great children of survivors—who have no idea the flood happened. As I worked to facilitate a standards-based project with my 6th graders, this is why I chose this particular topic.

Arguably, nothing in the last century has impacted the Southern Tier, especially Elmira, more than the flood. To those who lived through it, there was life before the flood and life since cleanup. There was Elmira before and Elmira after the catastrophe. The flood still impacts Chemung County even in 2019. It was a cornerstone in local history and important in the story of who we are as local residents. If we are to keep people here for the future to continue to rebuild and restore this area, we need to teach students about our own history and instill an appreciation for what Elmira and surrounding areas were and what it will be in the future.

I am a 6th grade teacher of English and Social Studies at Horseheads Intermediate School. I teach a team of forty-five students. At the Intermediate School, I am fortunate enough to have leadership that supports Project Based Learning. So, this exhibit is the culmination project of this PBL assignment. Students have spent months learning about the flood, researching topics of interest in relation to the flood, and building an informational exhibit that focuses on the impact on different aspects of the local community because of the flood.

Students began reading background literature written by local historians such as Thomas E. Byrne, Rachel Dworkin, and Kirk House. Once students were versed in the general history of the flood, research groups chose topics in which to focus on and build this exhibit. Topics included first responders, military and government, hospitals, and more. Groups chose an authentic historical image based on their chosen topic and wrote a short history outlining that particular story. Students used primary and secondary source material such as newspaper articles, journal articles, documentaries, and personal accounts of survivors to tell their histories. Put together, this is a unique story of the flood that is personal, relevant, and highly informative.

This museum exhibit is 100% student created. These 6th graders have worked very hard to tell a history that is still vivid to many but unknown to many others. We invite you to come learn about the impact of the flood on our local community in 1972. This student-created exhibit will be on display starting mid-January and we will have an exhibit opening reception on January 30th from 5-7 PM at the Chemung County Historical Society where students and I will be there to celebrate their work and interact with the community. Everyone is invited to attend, free of charge. We hope to see you there!
Posted by Chemung County Historical Society at 5:36 AM 8 comments: