While working on my Curator’s Corner article for our next newsletter, I came across a wonderful find tucked safely away in the Museum’s collections.  The collections database record describes two pieces from the same donor as “decorative papers in folder of hair samplers - art keepsake” and “various sizes and shapes of hands - in folder - art keepsake.”  I was surprised and delighted to discover that these two folders contain hundreds of locks of hair and each one has a name!

There are several sheets of paper in the first folder.  They had probably been part of a scrapbook at one time.  It was fairly common in the mid to late-19th century for friends to exchange locks of hair as mementoes.  School, social and church groups also collected locks of hair in scrapbooks.  The front of each page is covered in locks of hair that are tied with colorful silk bows, made into flowers, loops or braids, or attached to small paper decorations cut from greeting cards.  On the back of each page are the names of the locks’ owners.  In all there are over 110 individually crafted and labeled pieces of hair in the folder. 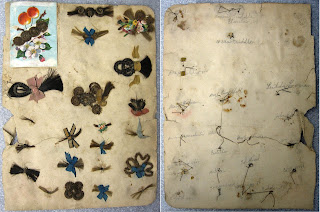 In the second folder, each piece of hair is attached to a cutout handprint that includes a name, date, and town, and sometimes the age of the person and a short poem about friendship.  While some hands are loose in the folder, most of them are attached to sheets of paper.  Many of the pages are still bound together.  There are nearly 270 hands in total.  From 1882 to 1912 Jenifer Bosworth collected these handprints and locks of hair from men, women and children from the ages of only 25 days to adulthood.  Most of the people are from this area – Elmira, Southport, Wellsburg, Chemung, Waverly, Towanda, Wilawana, Sayre – but there are also some from farther afield – Albany, Boston, Brooklyn, Newburgh, and even England. 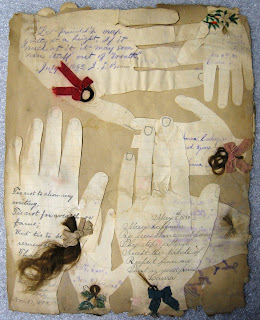 I am delighted to have found such treasures in the Museum’s collection but, like all truly interesting pieces, these two folders open up more questions than they answer.  Who was Jenifer Bosworth?  How did she come to know so many people of all different ages from around the region and beyond?  What inspired her to start a collection that would come to span thirty years?  We may never get any of these answers but more research and examination are certainly in store for these fabulous historic finds.

See more about these wonderful pieces and other hair items from the Museum’s collection on our webpage in the virtual exhibit, The Art and Memory of Hair.
Posted by Chemung County Historical Society at 6:09 PM 1 comment:

Shop Till You Drop


Do you have an interest in history and shopping is second nature to you?  If so you can shop and explore local history in one location!  In the CCHS Gift Shop we offer a variety of publications related to history.  Listed below, in no particularly order, are some of our top sellers.
·        Mark Twain: Wit and Wisecracks -    Most people probably associate Mark Twain (or Sam as we like to call him) with Hartford, Connecticut and Hannibal, Missouri but Elmira played just as important role in his personal and professional life.  Sam’s wife, Livy Langdon, was born and raised in .  Sam and Livy courted and were married in the Landon House (once located at on Church Street).  All three of Sam and Livy’s daughters were born in .  Between 1870 and 1889, Sam and his family spent their summers in Elmira at Quarry Farm where he wrote  Roughing It,  Adventures of Tom Sawyer,  Adventures of Huckleberry Finn, The Prince and the Pauper,  A Tramp Abroad, Life on the Mississippi and  A Connecticut Yankee at Kings Arthur’s Court.     At Woodlawn Cemetery Sam and his family are buried in the Langdon family plot.  A collection of quotes, Mark Twain: Wit and Wisecracks makes a great gift and easily fits into a pocket.  Believe it or not we have a hard time keeping this book in stock.

·        : Death Camp of the North by Michael Horigan - During the Civil War over 150 prison camps were established in the North and South.  About twenty prison camps received major notoriety.  For Union soldiers the worst was in while for Confederate soldiers it was .  Opened for 369 days, ’s prison camp held 12, 123 Confederate soldiers.  Of that 2,963 died from disease, malnutrition, poor sanitation and improper clothing and housing.  : Death Camp of the North  chronicles the brief history of the camp.
·        101 Things You Didn’t Know About (But Are About to Find Out) by Horace Martin Woodhouse – How much do you really know about ? once had the fastest carousel, but how fastest did it go?  How did get the nickname the ?  What celebrities have visited ?  Discover these and other fun facts  in 101 Things You Didn't Know About Elmira, New York.

·        Photographs from the Booth Library - Looking for photos of the yesteryear?  The Booth Library contains approximately 14,000 photos and we are happy to reproduce them.  Below is a staff favorite.
If it’s been awhile or you have never been to the Gift Shop, perhaps it’s time you stopped by.  Can’t make it to the museum?  We are open 24 hours seven days a week at http://www.chemungvalleymuseum.org/.
Posted by Chemung County Historical Society at 3:48 PM 1 comment:

African-American History Month: Why We Need It

February is African-American History Month.  That makes it the perfect time, not only to reflect on the history of African-Americans, but also just why it is we need a special month to celebrate it.

Contrary to popular belief, history is not fact, but rather a story we tell ourselves about the past.  Ideally, it is a story grounded in facts gleaned from 3-dimensional artifacts, images, documents and the recollections of people who were there, but sometimes it is little more than often repeated rumor.  Even though the events of the past remain unchanged, the story that is history is constantly evolving.  Sometimes it is because new evidence comes to light.  For example, 50 years ago history said that Christopher Columbus was the first person to discover America, but recent archaeological and DNA discoveries reveal that not only the ancestors of Native Americans, but also the Chinese, Japanese, Norse, Phoenicians, Polynesians and Welsh got here first.  Other times, history changes because we have renegotiated the story we want to tell and hear.

American history has traditionally been the story of white men.  There are a number of reasons for this.  Firstly, until the last 60 years or so, most historians were white men who, like most people, liked to tell stories about themselves.  Secondly, historians are taught to privilege written sources over things like oral histories and family stories which means that certain narratives can be ignored like, say, those of slaves who were illiterate by law.  Lastly, people have ignored the stories of African-Americans and other minorities because they potentially pose a threat to the history they would prefer to believe about America.

Having an African-American History Month forces us to acknowledge and listen to the stories of African-Americans.  For example, I was recently discussing Red Tails, a film about the Tuskegee Airmen, with an elderly African-American visitor and she told me about Clarence “Junior” Dart..

Dart was a 1939 graduate of the Elmira Free Academy where he served on the student council, sang in Glee Club, earned a varsity letter in track and was a founding member of the Orpheus Club, an African-American social club and music group.  During World War II, Dart was Elmira’s first African-American pilot, and was something of a neighborhood heartthrob.  In 1942 he learned to fly at the Elmira Aviation Ground School and went on to the Tuskegee Institute.  He served with the 332nd Fighting Group, the all African-American unit of the 15th Air Force in Italy. For his service, Dart earned the Distinguished Flying Cross, Oak Leaf Clusters and the Air Medal and was mustered out as a Captain. After the war, he stayed in the reserves and attended the Aero Industries Technical Institute.  He went on to work for General Electric and Knolls Atomic Power Labs.

Special thanks to Anne Jones and Evelyn Lutz for their help in finding information on Captain Dart.

Posted by Chemung County Historical Society at 7:02 AM No comments:

Lost But Not Forgotten

When people ask what we do at the Chemung County Historical Society, the simplest answer is we tell stories.  Whether it's though exhibits, publications or educational programming we tell the stories of the Chemung County. In addition, we show how the people, events and places in Chemung County fit into state and national history.

One of my favorite stories is about writer Anna Campbell Palmer. (1854-1928).  Though her contemporaries were Louisa May Alcott, Edna Ferber and Will Cather, Anna has largely been forgotten.

Except for the four years she spent going to school in Ithaca, Anna spent her entire life in Elmira.  Orphaned at 14, she became a teacher at 16 to support herself.  After eight years of teaching, Anna married store clerk George Palmer on September 28, 1880.  The couple would eventually have two daughters Georgianna (best known for teaching music to generations of Elmirans) and Sally.

Shortly after her marriage, to earn additional income Anna began writing.  Under the pen name Mrs. George Archibald (her own name would not appear in her work until 1901) Anna wrote newspaper and magazine articles, poems, short stories and books.  Her articles appeared in the Elmira Sunday Telegram and Elmira Evening Star and her column 'The Well Meant Comment" appeared in the Elmira Sunday Telegram until two weeks prior to her death.  She even served as the assistant editor of the Elmira Evening Star.  Anna also served as a correspondent for the New York Globe and Buffalo Express.  Her short stories and poems appeared in national magazines like St. Nicholas Magazine, Ladies Home Journal, Harper's Magazine, Frank Leslie Illustrated and Youth Companion.

Anna may have been forgotten but I like to think that her spirit lives on in our collection of her books, articles, poems and family photographs.

﻿
﻿
Posted by Chemung County Historical Society at 7:23 AM 2 comments: