Imagine Them In Their Underwear


For the opening of the museum’s second exhibit in the Civil War Sesquicentennial series, Keeping the Home Fires Burning: Life on the Chemung County Home Front, I gave a presentation on what a woman would have worn during the Civil War.  My presentation showed the specific undergarments that were required to get the wide, belled skirts and narrow waists that were iconic of that period. 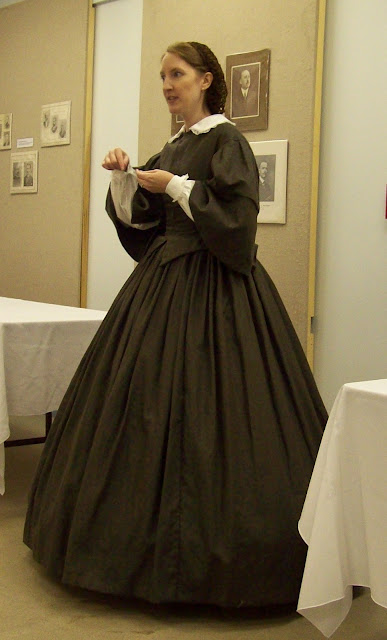 There’s the old advice that if you get nervous while public speaking that you should imagine your audience in their underwear.  In this case the tables were turned as I stood before the audience in my underwear - in my 1860s underwear, that is.  I began the presentation wearing a chemise, drawers and a corset.  From there I demonstrated how a woman would have gotten dressed.

The chemise is the first item of clothing a woman would have put on in the 1860s.  It is a simple, shapeless garment like a slip that is worn next to the skin.  The popularity of wearing drawers increased somewhat at the time because of the hoop skirt.  Wearing drawers helped women avoid embarrassment in cases when their skirts caught on something or flipped up.  Drawers could be knee to ankle length and often had decorative lace.  Corsets at the time were relatively short and could be laced tightly to create a small waist.  Colored corsets were fairly common, including red ones.  Modesty petticoats were worn to provide another level of privacy under the hoop skirt and sometimes for warmth in the winter. 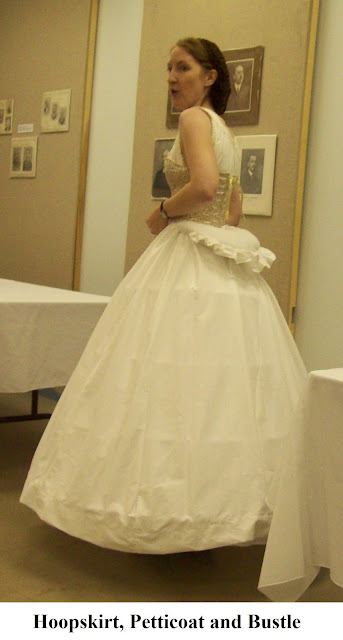 By the 1860s the hoopskirt was almost an essential piece of fashion.  Years earlier, six to eight petticoats were layered upon one another to create full skirts.  The use of the hoop allowed for very wide skirts without so much weight.  At the time, hoops were made of thin, flexible, light-weight steel bands.  The modern hoopskirt is made with plastic in place of the steel.  The hoop I was wearing measured 122” around the bottom.  Overtop of the hoop a woman wore another petticoat.  This petticoat was often made of a stiffer material like taffeta to smooth the lines of the hoop.  During the Civil War small bustles were also increasingly popular.  The bustle was like a narrow stuffed pillow tied at the back of the waist. 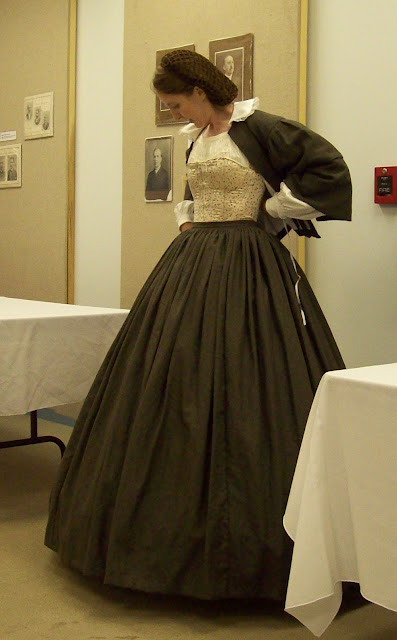 Many dresses of the Civil War era were two pieces, the skirt and the bodice.  The pieces were made to be worn together.  There was no mixing and matching of separates as is common today.  Many bodices had removable collars and undersleeves that could be washed or replaced.  Full sleeves on a bodice balanced out the width of the skirt and helped accentuate the narrow waist.  Without the various undergarments worn by women every day during the Civil War era, achieving the silhouette of that time would have been impossible.
Posted by Chemung County Historical Society at 7:17 AM 1 comment: 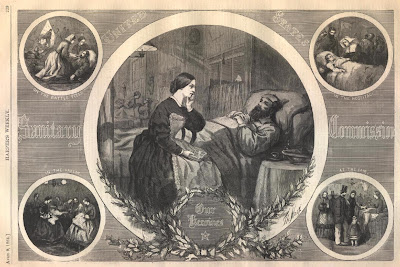 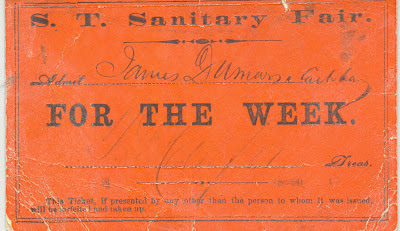 Posted by Chemung County Historical Society at 5:59 PM No comments:

This month we will open our new exhibit Vote for Me! in the Education Room.  Whether Democrat or Republican, Whig or Know-Nothing, political candidates from all parties have had to work to advertise themselves and their platforms to the voting public.  The exhibit will feature political advertisements including handbills, buttons and signs from our collections from as far back as the 1840s and as recently as 2010. 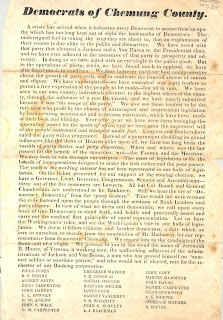 This letter, dating to the 1840s, is one of the oldest pieces of political advertising in our collection.  It urges Democrats to reject the wealthy bankers, businessmen and lawyers running for office and elect someone who understands the struggles of the working man.  It’s well over 100 years old and, except for some word choices, it practically reads like something from the Occupy movement.

Over the years, the nature of political advertisements have changed.  While the letter from 1840 is rather wordy, modern ads rely less on long winded arguments and more on catchy slogans, bright colors and photographs.  Take, for example, this Republican handbill from the 1990s. 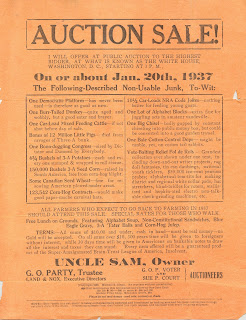 There are some really great items on display, but my favorite is this anti-New Deal ad from the 1936.  Why, you ask?  Well, because it’s just so clever. I’ll admit, unless you are a history geek or lived through the 1930s, some of the jokes are rather obscure but, if you take the time to look up the references, I’m sure you’ll get a kick out of it.  After all, when was the last time you saw a funny political poster that wasn’t created by The Daily Show or Stephen Colbert?
Since our founding, voting has been a right, privilege and responsibility. Do your part and vote.  Also, come and see our exhibit.  It’s practically your patriotic duty!
Posted by Chemung County Historical Society at 5:53 AM No comments:

Miss Clara and her Seminary 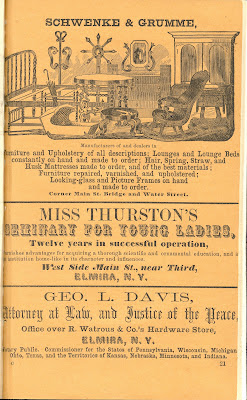 Between the 1830s and early 1900s private schools flourished in Elmira.  One of those schools was Miss Clarissa Thurston’s Female Seminary.    The school is one chapter in the long life of one of my favorite people from Chemung County history - Clarissa Thurston (1801-1884) or better known as Miss Clara.
Born on February 26, 1801 in Andover Massachusetts, Clarissa was one of six children.  A confirmed spinster Clarissa believed educating young women was her true calling.  Before coming to Elmira, she had taught in Maine, Massachusetts, New Hampshire, Georgia, New Jersey, and western New York.  In 1843 she moved to Elmira where her brother Judge Ariel Thurston had settled.    Three years later she purchased a house at 413 North Main Street (where Weis is located today) and in 1847, with her sister Mary, she opened Miss Clarissa Thurston’s Female Seminary.
The overall goal of the seminary was to train young women to have high morals and sound religious principals.  Day and boarding schools were accepted in four levels – preparatory, junior, middle and senior.  For boarding students’ tuition was $130 a year plus expenses for light and fuel.  Day students paid between $3 and $6 per quarter.  Subjects included reading, penmanship, arithmetic (mental and written), grammar, geography, history (general, United States, ancient and modern), natural philosophy, botany, algebra, geometry, geology, logic, moral science, transposition and parsing, physiology, chemistry, astronomy, and trigonometry.  For additional fees students could also take lessons in piano, organ, vocal music, drawing, painting and languages (choice of French, German, or Latin).   Each student was asked to bring a Bible and English dictionary.  Since students were expected to walk a half hour each day overshoes and umbrellas were also required.  Though most students were from Elmira and upstate New York, students also came from New Jersey, Pennsylvania, Georgia, Maine, Missouri, Minnesota, Rhode Island and Washington, DC.  Perhaps Clarissa’s most famous students were two sisters - Livy Clemens and Susan Crane.
The school closed in 1864 with Clarissa’s retirement.   Upon retiring Clarissa began a new chapter in her life as a writer.   In addition to writing articles for educational and religious magazines, like Christian Family Magazine and The Parlor Magazine, she wrote at least three books.  Her books include Home Pleasures, Memoir of a Lady and Light from History or the Story of Fulfilled Prophecy.    In the summer of 1871 Clarissa added one more item to her list of accomplishments – world traveler.  At the age of seventy she traveled by herself to France, Germany, Italy and Switzerland.
Sadly, Clarissa’s life ended tragically.  As she got older Clarissa became deaf and on her way to church on the morning of January 6, 1884 she did not hear the train’s bell or warning shouts.  While crossing Second Street, Clarissa was hit by a train and killed instantly.   She was 83 years old.