All’s Fair in Love and at War


You’ve probably seen him.  In every war movie there’s always that guy, that genre-blind idiot who talks incessantly about his girl and their plans for after the war.  If he’s really dumb, he’ll flash her picture right before getting his head blown off.  Of course, in reality, it doesn’t work that way.  Soldiers rely on their loved ones back home to help them deal with the homesickness, the fear and the uncertainty.
Take, for example, Richard Guion.  During the Civil War Guion served with the 161st New York Volunteers.  He was far from home, worried about the future and deeply in love with a girl named Nellie.  He wrote about his experiences and feelings in his diary.  He depended on her letters to help keep him going.  On November 27, 1862 he wrote I received Nellies letter No. 1 this PM I feel 50 per cent better since I read it.  It does me more good to read her letters than it does to eat.  Sometimes, just the idea of her was enough to sustain him.  I wish I could get alone somewhere & have a good cry, he wrote on December 3, 1862.   Oh, I would give a good deal to be with my dear little Nellie now. But I will not give up to bad feeling.  I shall try and keep up a good heart & I hope I shall soon find myself with my own dear little Nellie again and oh I cannot express the joy it will afford me to see & be with her again.  When I first read the diary I was worried Guion had fallen prey to the war movie cliché, but you’ll be happy to know he not only made it home, he married his beloved Nellie.

Then there’s Seymour Dexter and Ellenior “Ellie” Weaver.  Dexter dropped out of Alfred Academy in 1861 to join the 23rd New York Volunteers.  In the 3 years he served in the army, Dexter wrote over 100 letters to his “Dear Friend” Ellie as he called her.  Many of his letters can be found in the Booth Library.  In his letters he complains about conditions, describes battles, shares his deep grief over fallen comrades and teases Ellie about the somewhat slow nature of their courtship.  Another week has passed but still no letter comes from my friend Ellie, he wrote on September 8, 1861.  If this silence was in one in whom I did not place the most perfect confidence I should hesitate to write but to thee I have no such hesitancy.  After the war, Dexter finished up his studies at Alfred Academy and became a lawyer.  It really shows in his writing.  More importantly, after seven long years of courtship, the couple married and, in rather short order, had 6 children.
Posted by Chemung County Historical Society at 6:09 AM 1 comment:

A Tale of Adulteration and “So-Called” Extracts

The Kelley-Whitney Extract Co. was founded in 1901 by Enoch J. Kelley and Daniel Whitney in Elmira, N.Y.  Their first store was located on E. 2nd and Union Street and by the 1910s had moved to 627-629 Lake Street.  The company spanned most of the early-twentieth century, eventually going out of business in 1938.  For most of their history, the company seemingly operated with very little controversy… except for their run-in with the USDA in 1912.

In 1912, the Kelley-Whitney Extract Co. was charged in violation of the Food and Drug Act for shipping impure lemon, orange, and vanilla extracts.  The Company’s bottles advertised that each of its extracts were “pure.”  One such label read:


“Kelley Whitney Extract Co. Pure Concentrated Extract Lemon.  For flavoring Ice Cream, Cake, Custards, etc., K.W.C.  Guaranteed Strictly Pure.  Caution.  Do not use too much.  One half teaspoonful to each quart will be sufficient.”

However, instead of being “Strictly Pure,” United States Department of Agriculture (USDA) chemists found the “so-called” lemon extract actually contained a mixture of lemon oil by precipitation, lemon oil by polarization, citral, and the coal-tar dye, Aurotine (used to artificially color the product).

Further chemical tests found the orange and vanilla extracts were similarly adulterated.  The orange extract contained the coal-tar dye "Double Scarlet," and the vanilla extract was mixed with other substances and artificial coloring to reduce its strength and change its appearance.

The Kelley-Whitney Extract Co. pleaded guilty to adulterating their products and using false and misleading labeling and the USDA delivered a three page judgment with all of their chemical findings.  Their sentence?  A $25 fine.

The Kelley-Whitney Extract Co. case is an example of regulatory practices in the early decades of the Pure Food and Drug Act (first passed in 1906).  In fact, other local businesses also faced USDA fines, often for misrepresenting the weights of their products on packaging.  Still, this episode and modern-day food recalls serve as a reminder that what we’re all eating may not be as “pure” as we think.
Posted by Chemung County Historical Society at 6:21 AM 1 comment:

We All Scream for Ice Cream!

Ice cream is one of the best things about summer.  I’m sure I’m not the only one who looks forward to the day my favorite ice cream stand opens for the season each year.  More than 1.6 billion gallons of ice cream are produced in the U.S. each year but sundaes and half-gallons were not always so widely available.
Various forms of the frozen treat have been made for thousands of years.  The founding fathers enjoyed ice cream in the early days of the Colonial America.  The first advertisement for ice cream in the U.S. appeared in the May 12, 1777 issue of the New York Gazette.  The exotic dessert was available in the private homes of the elite and from confectioners in New York, Philadelphia and other cities but it was a rare treat, not available to most people until the middle of the 19th century.
As insulated ice houses became more common through the early 1800s, people started to have access to ice year round.  The first small-scale hand-cranked ice cream makers were patented in the 1840s.  These ice cream makers were wooden barrels with metal churns inside.  Cream, sugar and other flavorings were put into the churn and then ice was packed around it within the barrel to chill the mixture as someone cranked the churn.  With these machines people could make ice cream at home for special occasions.
Large-scale manufacturing of ice cream was started in 1851 by a Baltimore milk dealer named Jacob Fussell.  By the late 19th century ice cream was more widely available in the U.S. thanks to advances in manufacturing technology, mechanical refrigeration, and transportation.  The L.A. Corning Ice Cream Company manufactured ice cream in Elmira as did the Hygeia Ice Cream Company, an offshoot of the Hygeia Refrigerating Company.  There were also many shops in the area serving up the sweet frozen treat including Creighton's Creamery, Schmeck's White House Ice Cream Store, Allendale Ice Cream Bar and Dolly Madison Ice Cream.

Posted by Chemung County Historical Society at 6:33 AM 1 comment: 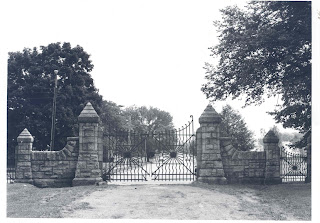 Lear Green Williams
Lear Green was a slave owned by a Maryland man when she met and fell in love with William Adams, a free black man.  She escaped to freedom on a steamship disguised as her soon-to-be mother-in-law’s baggage.  Green spent 18 hours crammed inside a steamer trunk until they had safely completed their journey from Baltimore to Philadelphia.  Afterwards, the couple headed to Elmira where they wed and settled down.
Posted by Chemung County Historical Society at 8:07 AM No comments: