Blood on the Water: Clubbing a Sea Lion on the Chemung

I usually like my blog posts to highlight the quirky, light side of history, like gum chewing controversies or vanilla extract scandals.  However, this week’s post has a decidedly darker subject matter.  In addition to being a museum professional, I am a historian of human-animal interactions, which entails subject matter of both great levity and tales of human cruelty. Unfortunately, the story of Bob the sea lion falls into the latter category.

In 1903, Bob the sea lion escaped from his home in Trout Park in Cortland, NY.  He swam via the Tioughnioga and Chenango Rivers to the Susquehanna River and then to the Chemung.  All along his route, people gathered to watch the animal poke his head out of the water and swim around in the local rivers.  Some fishermen tried to catch him (there was rumored to be up to a $300 prize for his capture), but Bob eluded them all.
(Use the interactive map below to trace his journey and learn about Bob sightings).


Everyone had sea lion-mania.  The newspapers reported his movements in Towanda, Tunkhannock, Sayre, Chemung, and Elmira.  Some locals noticed that the Susquehanna and Chemung were exhibiting a reddish color, a feat that they attributed to Bob.  In a bit of pseudoscience, the papers claimed that when chased, sea lions gave off a red “exudation,” thus turning the rivers red.  The theory that one sea lion and his mystery excretions were enough to color an entire river was not believed by all. The fine folks of Sayre went on the record saying “no one here” believes Bob was responsible.

Accusations of coloring the rivers red aside, Bob’s jaunt along the waterways was relatively uneventful until he reached Elmira.  In the city, he was met by adoring crowds, but also by people who were intent on capturing him.  One party, John “Stub” Appleton, his son, John Jr., and Charles Bucholtz had made it their mission to wrangle the rogue sea lion, even almost capturing him in their nets several times.  In the morning of July 25 the men cornered Bob in shallow water.  They tried to wrestle the 150 pound sea lion onto the boat, but Bob put up a fight, allegedly lunging at Stub.  In “self-defense,” the men clubbed Bob to death.

It is not my job as a historian to pass judgment on people in the past.  I am supposed to remain as objective as possible.  S0, I will let the newspapers from the time speak for me.  Upon hearing news of Bob’s death, the public and the press were outraged.  The Elmira Daily Gazette ran an interview with Bob’s trainer recalling how the animal had toured around the world with Ringling Brothers’ circus.  The trainer exclaimed, “I could not feel worse if someone pointed a gun at my heart and knew that they would pull the trigger.”  The people of Cortland condemned the killing as “stupid, brutal conduct” and lamented the heartbreak of Bob’s pregnant widow, Duchess.

Unfortunately, the indignities of Bob’s stories did not end with his death.  Stub Appleton mailed Bob on ice back to his owner, who lived in Syracuse.  Upon the corpse’s arrival, the owner refused to pay the $50 shipping charge claiming that the sea lion wasn’t worth that much dead or alive, so poor dead Bob was shipped back to Elmira. With his victim back in his possession, Stub announced his intentions to have Bob stuffed and put on display.  Allegedly, Bob was displayed in the window of Berner’s Café on East Water Street.

Here Comes the Bride but Where is the Groom?

While searching for objects to put on display in our upcoming exhibit ‘Til Death Do Us Part: Wedding and Funeral Traditions in Chemung County (opening to the public on October 18th), it was not so much what I found that caught my attention but rather it was what I did not find.  CCHS has over fifty bridal gowns in its collection but only one groom’s suit.

This 50:1 ratio seems high but I imagine it is not very unusual in museum collections.  Women’s wedding gowns, especially from the late 19th Century through today, were often dresses made or purchased for that one, special event.  It was highly unlikely that the bride would ever wear her wedding gown again.  The dresses were kept and cherished by the bride and sometimes passed on to her daughters before ending up in a museum’s collection.  As many weddings seem to be focused on the bride – it’s her big day! – it makes sense that so much emphasis is placed on her dress.
The lack of grooms’ outfits may be that men are just not very sentimental about the clothing they wore at their wedding.  There are several other possible reasons why suits are so outnumbered by gowns.  The groom could, and often did, wear his suit again for other events and occasions.  It was not a one-of-a-kind, one-time garment.  Military men often wore their dress uniforms at their weddings, completely bypassing the need for a special suit.  And in modern times, many grooms rent a suit or tuxedo for their wedding that is returned after the ceremony.
The shortage of men’s wedding clothing could also be simply a lack of information in the museum’s records.  There are ten tuxedos in the CCHS collection though none have been positively associated with a groom.  This 5:1 dress to suit ratio is much better and will assure that the lovely bridal gowns we put on display will not be alone.

Posted by Chemung County Historical Society at 6:19 AM 1 comment: 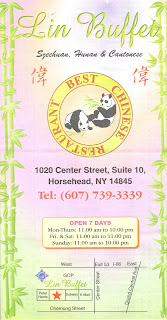 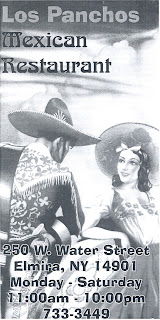 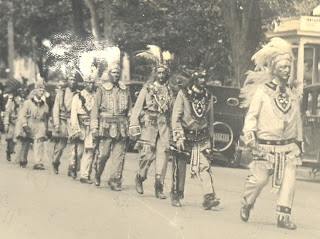 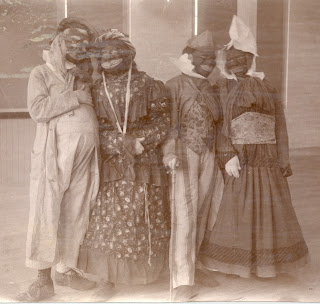 Posted by Chemung County Historical Society at 6:32 AM 4 comments:

This is the story of how in 1890s Elmira, chewing gum almost led to the corruption and decline of an entire generation of young ladies.  Or at least this was the story according to one “Mrs. E.S.E,” a concerned crusader who was desperate to stave off an impending crisis and restore moral order to her city.

On February 16, 1890, the Elmira Telegram printed Mrs. E.S.E.’s open letter to the “young ladies of this fair city.”  In the letter, she describes a deeply troubling outing she and her husband had shopping on Water Street, Elmira.  She observed two teenage girls in a shoe store, one of whom was “industriously” chewing gum.  A disgusted Mrs. E.S.E. stated that the habit distorted the girl's otherwise pretty features and disrupted her speech.  She provided a snippet of the conversation for dramatic effect:

Mrs. E.S.E also noted that upon the girls' departure, the attractive clerk had on his face “a look of disgust which could not be mistaken.”  Thus, the girl’s filthy habit was also ruining her chances of her finding a suitable husband.
As she left the shoe store and continued her errands, Mrs. E.S.E. found herself surrounded by a gum-chewing nightmare.  The shop girls, the Saturday promenaders… everyone was chewing gum.  Mrs. E.S.E. ended her letter with an impassioned plea to girls to stop their chewing.  Aside from the general facial ugliness it caused, she claimed it could cause lopsidedness of the jaw from favoring chewing on one side, and eye and stomach problems.

Mrs. E.S.E. was not alone in her critique of the habit.  Elmira's Mrs. Helen Bullock, a member of the Women's Christian Temperance Union, was a leading anti-gum activist.  She was particularly concerned about gum containing opium.  In addition to arguments that gum chewing was a gateway habit to intemperance, others thought it could cause blindness.   So how could gum chewing possibly be thought to cause blindness, you ask?  In 1888, the Telegram published an interview with an optician explaining the “science” of the gum-blindness connection.  Apparently, over-exertion of the jaw muscles was dangerous because they were connected to the spine, which was in turn connected to the optic nerves.  Eventually the nerves become “enfeebled” and the eyes sunken and gray.
So ladies, before you pick up that next stick of gum, remember your Victorian morality.  As a chronic gum chewer myself, I never knew I could blame my poor eyesight on this “disgusting habit.”  Perhaps I should go find a mirror to see if my features have become grotesquely distorted as well.  Alas, as Mrs. E.S.E would have us know, you'll never get a husband with sunken, blind eyes and a lopsided face!

Posted by Chemung County Historical Society at 6:56 AM No comments: