Home on the Grange with the Patrons of Husbandry

The National Grange of the Order of the Patrons of Husbandry was founded in 1867 in an effort to bring Northern and Southern farmers together.  The organization really took off in the 1870s when the National Grange sent paid agents out to form local chapters.  As fraternal organizations went, the Grange was unique in that encourage the active participation of both men and women and, in fact, most chapters required that four of the offices be female.  Throughout the Progressive Era (1890s-1920s), the Grange lobbied hard for pro-farm legislation including regulation of railroad shipping costs and grain warehouses, free rural mail delivery and the farm credit system as well as a range of social issues including prohibition and women’s suffrage.  While membership in the Grange has fallen sharply off in recent decades, they continue to work on issues regarding free trade and farm policies.  In many rural communities, the Grange Hall acts as a community center.

In addition to its more public activities, the Grange was also a secret society.  There were seven degrees of membership with a range of rituals and symbols borrowed from Freemasonry, Greek and Roman mythology and the Bible.   While the Grange no longer has secret meetings or practices many of the rituals, some vestiges of the practices still exist today.

The Chemung Valley Grange, chapter No. 57, was found in 1885.  Other Chemung County Granges include the Ashland Grange No. 210, Big Flats No.  1106, Veteran No. 1108 and Horseheads No. 1118.  We recently acquired a collection of papers from the Horseheads and Veteran Granges.  A complete listing of the contents of those papers can be found here:  http://chemungvalleymuseum.org/index.asp?pageID=238&recID=1061.  In the mean time, here is a selection of Grange-related items from our collections.

Posted by Chemung County Historical Society at 6:45 AM No comments:

Do you remember the taste of your first ballpark frank? Remember the smell of the oil on your glove and the feel of the bat in your hand? Remember the crack of the ball on the bat and the roar of the crowd? For 150 years, people in Chemung County have shared these experiences. Join us on Saturday, June 22 at 1 pm to celebrate the history of baseball at the opening of our new exhibit, Root, Root, Root for the Home Team: Baseball in Chemung County.  This program is free and open to the public.

Although its origins are a mystery, baseball likely evolved from an older English game called rounders.  There were a number of regional variations but, in 1845, the New York Knickerbockers wrote the rules of the modern game.  By the 1850s, the Knickerbocker rules were used throughout New York, New Jersey and Pennsylvania.  During the Civil War, soldiers from across the Union played ball and created a unified version of the game.  But baseball wasn’t just for players, spectators enjoyed it too.  Elmirans bought their first baseball tickets for a game between the Erastus Ransom Alerts and soldiers from the local garrison in 1866.  Throughout the 1860s and 1870s, Chemung County fans paid to watch semi-pro teams from across the Twin Tiers play in a regional league.

To learn more about the history of baseball in Chemung County come see our new exhibit from June 22 through the end of September 2013.
Posted by Chemung County Historical Society at 6:21 AM 3 comments: 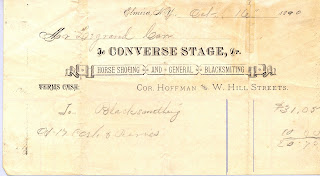 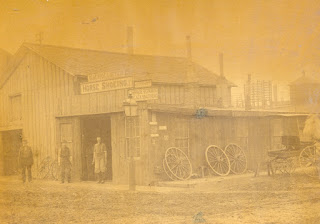 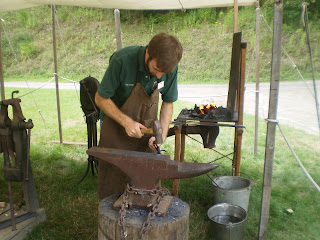 On Saturday, June 15th, from 1pm to 3pm, one of these artisan smiths will be doing a demonstration of his craft right here in the CCHS parking lot.  Nathaniel Francisco, a recent Elmira College grad, has been working as a smith since high school and interned with the blacksmith at the Farmers Museum in Cooperstown.  Some of the products of his work will be available for sale.  Hope to see you there.
Posted by Chemung County Historical Society at 7:45 AM No comments: