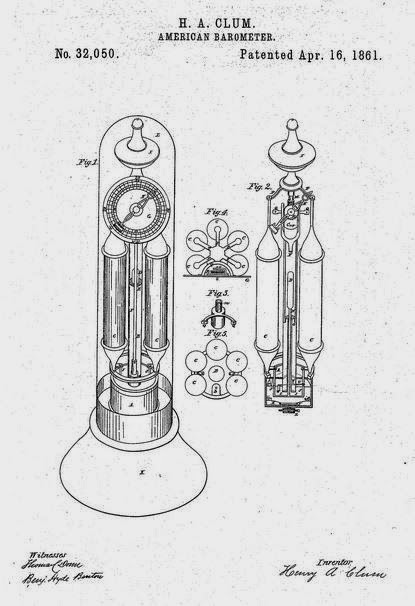 Clum’s radical invention was not easy to sell as he struggled to convince people of its practical use.  Although an 1874 newspaper joked that Clum should now “make his everlasting fortune of intending bridal parties and women with new bonnets," he failed to actually strike it rich.  In fact, Clum was destitute for much of his life.  He did sell some of his machines, including one aelloscope to Queen Victoria of England after doing a demonstration in her court.  France’s Napoleon III and the Russian government each purchased one, too.   He was once offered $10,000 for his patent, which he refused, believing that it was worth no less than $100,000.  He made most of his income from the sales of his small barometers and the lectures that he gave across the country and Europe.
Henry Clum likely came to Elmira during the 1860s.  He first lived on the northwest corner of Carroll and Lake Streets and then moved to the block of the Lyceum Opera House.  While in Elmira, Clum built a storm finder for the New York Tribune, which used the machine for 6 years.  He was in talks with Senator Charles Sumner to build a storm finding machine to sit atop of the US Capitol building, but the plan was called off after Sumner died.  The US government eventually did purchase one of Clum’s machines.  The machine needed to be taken apart and cleaned every year, and by the second year, the government thought that they could do it themselves without Clum’s assistance.  They succeeded in getting the machine apart, but could not put it back together.  Clum refused to help, claiming he didn’t take “second hand” jobs.
At this time, Clum’s personal life suffered about as much as professional life.  He married Elmiran Annie Snell, who was the war widow of Charles Harris.  The couple was happily married for five years and had a daughter when the presumed dead Harris came back to claim his wife.  Annie and their young daughter went to Buffalo with her first husband (who being the jerk that he was, left Annie again).  Though Clum and his wife never reunited, Clum continued to use his meager income to support Annie until her death in 1881.  He even had to go to Buffalo to bury her.
One of Clum’s only close friends was Matt Lockwood, the costumer for the Lyceum Theater (and another fascinating character who I am writing a future blog post about).  The two friends spent much time together, and Lockwood was allegedly one of the only other people who were able to understand and put together the aellograph.
On July 6, 1884, Clum was in Binghamton to give a lecture at the Fireman’s Hall.  While he was preparing his equipment, there was an explosion which caused iron shrapnel to strike Clum in the head and fatally wound him.  Although the windows of the hall were blown out and Clum was killed, the aellograph, which was on the stage, was remarkably unharmed.  When Clum’s friend Lockwood came to bring the body back to Elmira, he discovered that the people in Binghamton were planning to keep the machine.  Lockwood disagreed with this and he waited until the Hall’s janitor left and he stole it out of Binghamton.  It remained in his possession until he donated it to the Chemung County Historical Society.  At one point, the inner workings were stolen, and may have never been recovered (they are not part of CCHS’ collection).
His funeral was attended by his few friends and his daughter, Ettie.  Clum was buried in Woodlawn Cemetery in Matt Lockwood’s plot.  Despite his many achievements during his lifetime, Clum is another one of our historical figure who has been largely forgotten.  When he has been remembered, the accounts of his life have focused more on the melodrama of his biography rather than his scientific contributions.  While these personal hardships certainly were important points in his life, I prefer to remember Clum as an eccentric scientific genius rather than a figure like those in a Shakespearean tragedy.
Watch the story that Sean did on WETM News 18 here.
Learn how to make your own barometer here.
Posted by Chemung County Historical Society at 5:38 AM 2 comments:

A Quick Guide to Document Repair

Despite being made out of trees, paper is fragile. With age and rough handling it can be torn.  So what do you do when this happens?  Like medicine, the first rule of document repair is do no harm.  While most people reach for the scotch tape, tapes can actually be very harmful.  They yellow as they age and lose their stick and can often end up damaging the documents they’re supposed to help.
When I have to repair a document, I reach for my Japanese paper and wheat paste.  The Japanese paper is an acid-free paper specially designed for document repair while the wheat paste is a water-soluble, fast-drying glue.  Both are available through archival and library suppliers.  So, how does it work?

Step 2: Flip the item over.  All document repairs should always be made to the back so as to make repairs invisible and easier to fix if you mess them up.

Step 3: Tear strips of the Japanese paper to cover the tear.  Tear pieces that are wider than the tear but not too much longer.  Use multiple pieces so as to line up over the curvature of the tear.

Step 4: Lightly apply the wheat paste to the pieces of Japanese paper.  Never do it on the actual document.  I usually use a plastic plate, piece of glass or other non-absorbent surface.  Make sure to remove any excess paste.

Step 5: Place the now paste-covered paper over the tear and gently smooth it down, dabbing away any excess liquid.  You should always work from the center to the edge, laying each piece at a time until the entire tear is covered.

Step 6: Let air dry for a bit and then place a piece of absorbent paper, glass and a weight over the repair.  As paper dries it tends to curl and this will ensure that the repairs actually dry flat rather than curling.


Step 7: Admire your work or fix it if you messed up.  The great thing about wheat paste is that you can easily reverse your mistakes just by adding water.
Posted by Chemung County Historical Society at 7:05 AM 1 comment: