by Judith Sheasley of Trinity Church

Thomas H. Stewart, a fugitive slave and lesser known, though not less loved and respected, contemporary and friend of John W. Jones, made his way to Elmira along the Underground Railroad.

According to an essay published in the Elmira Evening Star on March 17, 1900, Stewart had been the property of John C. Covington Hardy on the Old Beauford Farm near Richmond in Virginia’s Nottoway County. He was then Richard Hardy, having taken his master’s name. As a boy, he carried wood, kept flies off the table and fed the chickens, ducks, and turkeys, among other chores. Mrs. Hardy died of scarlet fever and Hardy married a cruel woman who hardened her husband as well. Stewart asked to be sold, which brought only more beatings. Eventually he and the other slave on the farm escaped. For six weeks during the summer of 1852 they traveled north by night, lying in swamps and bushes during the day and living chiefly on fruits and vegetables, once finding a small pig to broil. They were aided by Quakers in Bellfonte, Pennsylvania, where they spent the winter. The next summer they left for Canada. Along the way he changed his name.

When he reached Elmira in 1853 he found an active abolitionist community and a new home where he learned to read and write, made a living, married, and raised a family. Still in effect at that time, the Fugitive Slave Law of 1850 required anyone who knew a runaway slave to turn him in. That never happened.

In Elmira he went to work for Henry Collins, a school commissioner, who persuaded him to get an education. Stewart sawed wood and swept the schoolhouse to pay for his lessons.

Thomas Stewart was baptized in Trinity Episcopal Church on July 23, 1854 and confirmed on July 30. On September 15, 1858 he and Ann Johnson were the first to be married in the handsome new church on the corner of N. Main and W. Church Streets. The couple walked up into the chancel on boards instead of steps.

He worked for Elmira Female College (later Elmira College) from its opening in 1855 until the autumn of 1864. In January of 1866 he became sexton at Trinity. (John Jones was sexton of the First Baptist Church directly across Church Street.)  In addition, for eighteen years he was the janitor at the original Elmira Free Academy on Lake Street, where he was known by students as “Tommy.”

Thomas Stewart died on September 15, 1912 at the age of 86. His funeral was held at his family home at 607 Dickinson Street. His service was officiated by The Rev. Herbert Hannah, rector of Trinity Church. The Rev. Charles H. McKnight, former rector and a life-long friend, assisted. A quartet from the Trinity Church choir sang and his four sons, Theodore, Walter, Frederick, and Frank were pallbearers. He was buried in Woodlawn Cemetery. His wife Ann had died twenty years before, on July 14, 1886. He and Ann also had four daughters: Nettie, Cornelia, Cora, and Lena.

Learn more about Thomas Stewart and other interesting historical facts at the Archival History of Trinity Church in Downtown Elmira to be held at Trinity Episcopal Church, W. Church and N. Main Sts., on Saturday, July 19, 1-3 p.m. 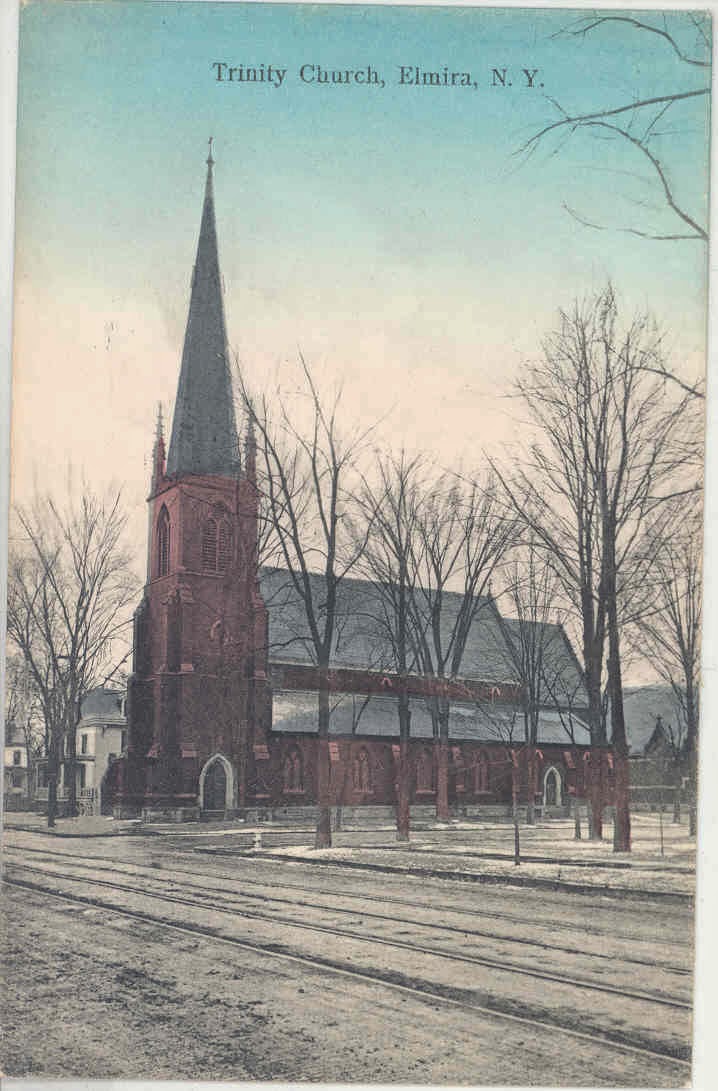 This is a City of Elmira 150th Anniversary event presented in cooperation with the Chemung County Historical Society.

Posted by Chemung County Historical Society at 6:29 AM