On May 18, 1944, Mr. and Mrs. John Wronkoski were elated to become new members of an exclusive club which met monthly at the German Evangelical Church under the auspices of the America Red Cross. Their son, Lt. Edward Wronkoski, had been shot down over North Africa and been reported missing on March 29th. They were understandably relieved to learn, nearly 2 months later, that he was alive and well in a German prisoner of war camp. The parents and wives of the Red Cross’s POW kin support group welcomed them with open arms. 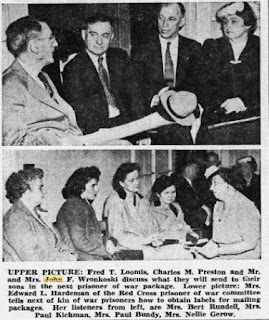 During World War II, 100 Chemung County servicemen were held as prisoners of war. The majority were held by German forces, with just a handful held by the Japanese. Lt. Frederick F. Loomis, pilot with a bomber group in stationed in North Africa, was the first Chemung County man to be taken prisoner after being shot down on February 23, 1943. In his first letter home after his capture, received on April 28th, he assured his parents that he was fine and asked them to send candy, books, and model airplane kits to help relieve the boredom. His parents, Fred and Edythe Loomis, became the founding members of the Elmira Red Cross Prisoner of War Committee.

Over the course of the war, the American Red Cross delivered over 27 million food parcels to 1.4 million U.S. and allied POWs held by Germany. They did not send parcels to the Pacific theater as the Japanese refused to take delivery. Around 13,500 volunteers working at packing centers in New York City, Chicago, Philadelphia, and St. Louis assembled 11-pound packages of non-perishable foods like dried fruits, canned meats, condensed milk, hard cheeses, crackers, jam, sugar, chocolate, and cigarettes. They also sent special packages with blankets, clothes, medical supplies, and toiletries. The turn-around from packing to delivery was about three months and the Red Cross tried to time it so that prisoners received a package a week.

Sgt. Henry Pickel of Southport, held captive from August 7, 1944 to January 31, 1945, claimed that the Red Cross packages made all the difference. “If it hadn’t been for the American Red Cross, the food situation would have been extremely serious,” he later told a reporter from the Star-Gazette. The Germans only fed them a slice of bread and a bowl of potato soup once a day, and prisoners relied on the weekly food shipments to stave off mal nutrition. That wasn’t all the Red Cross provided. “They sent us food, clothes, and warm blankets,” Pickel reported. “Until the blankets came, we had been trying to keep warm with small, worn out blankets that didn’t begin to do the job.”

Prisoners’ friends and family could send packages too. In May 1944, the Loomis family sent their captive son four tiny screwdrivers and a pair of tweezers so he could do watch repairs. In another package, they sent him a saxophone. The Frawley family of Elmira sent their son, T-Sgt. John Jr., a package with cigarettes and a photo of the family dog. Despite being forced to march from camp to camp as the Allied armies advanced, John Frawley Jr. managed to hang onto every letter his family sent, along with the increasingly worn picture of Tippy the dog. Loomis, on the other hand, was forced to leave his belongings behind.

One of the things that the Elmira Red Cross Prisoner of War Committee did, in addition to providing emotional support, was to help teach the families of POWs how to ensure that their letters and packages actually made it to the prisoners. Packages could not weigh more than 11 pounds and had to be clearly labeled with the prisoner’s name, rank, prisoner of war number, and camp number. Each package and letter was reviewed and censored by the American government and read again and approved by the Germans before being passed on to the prisoners. By 1944, the U.S. government began issuing special stationary for mail to prisoners and only letters which had been typed or written in block capitals were accepted.

The captured men and their families were all incredibly grateful to the Red Cross. While still prisoners in Germany, Lt. Frederick F. Loomis and Lt. Edward Wronkoski both had their parents donate $25 from their bank accounts to the Red Cross’s fundraising drive in March 1945. Lt. John McNamara, who had been sent home as part of a wounded prisoner exchange, also donated to the cause. After his return of Elmira in April 1945, Sgt. Henry Pickel spoke before the Elmira Red Cross Prisoner of War Committee, describing his captivity and thanking them for their efforts.
Posted by Chemung County Historical Society at 6:17 AM No comments:

One Foot in Front of the Other

Runners in the Finger Lakes welcome the arrival of autumn—temperatures are cooler, the humidity is less oppressive, and the colors in the hills can be stunning. Although the Wine Glass Marathon (held since 1981) was virtual last year, this year it returned in person, attracting male and female competitors from more than 41 states. Today we take for granted that both women and men can participate in the event, but a look back at the history of long-distance running shows that women have had an uphill battle when it comes to marathons. The story of one local runner can be an inspiration to keep going.

In 1984, the women’s marathon was added to Olympic events. It was the same year that Molly Huddle and her twin sister Megan were born in Elmira to mom Kathleen, an artist, and dad Robert, a physician. The Huddles, including siblings Christine and Katie Rose, were an active family and Molly enjoyed both school and sports.

Huddle attended Notre Dame High School, where in addition to her studies she played on the school’s soccer, basketball, and track teams. During fall of her senior year, she decided to pursue long-distance running.

Notre Dame didn’t have a cross country team, so after petitioning the district’s athletic governing board, it was arranged that she could run and her father would coach her. She became Notre Dame’s one-person team, representing the school in meets, and the five-foot four-inch Huddle not only won races but broke league records. Huddle went on to attend Notre Dame University, where she continued to set personal bests and win national recognition.

Since then, Huddle has proven herself on the world stage time and again. Her career to date includes 5 world finals, 2 Olympic finals, and 7 personal bests. She was set to compete in this year’s Olympic Games but had to pull out due to hip and ankle injuries.

Early in the 20th century, women were prohibited from entering races due to health concerns that sound strange to us today. One thing some said was that running would cause a woman’s uterus to fall out. The first woman on record to run a marathon was Violet Piercy of Great Britain in the fall of 1926. Her time was 3:40:22, a record which stood unbroken until 1963. Almost one hundred years later, the women’s record in 2021 is 2:14:04. Molly Huddle’s own record is 2:26:33, set in London in 2019.

The Boston Marathon, one of six exclusive world-class races, began in 1897. When marathons became popular amateur sports in the late 1960s and 70s, women were still prohibited from participating. It seems old myths persisted. The Boston race’s rule book did not even mention gender until the late 1960s, after a 23-year-old woman named Bobbi Gibb attempted to enter the 1967 race but was denied on the basis of her gender. She went on to unofficially run and clocked in at 3:21:40, coming in well ahead of many of the male runners.

The following year, Katherine Switzer entered as K. V. Switzer, using her usual signature. This time the officials didn’t notice her application. To run, she wore a baggy sweat suit. When race officials discovered she was a woman, they and other runners physically attacked her, ripping her race number off her jersey. Today almost half the runners qualifying for the Boston Marathon are women.

Switzer became an advocate for other women runners. She influenced Avon and Nike to lend corporate support for women runners and women’s races, thus elevating the sport. Things were slowly changing. In 1972, NYC Marathon officials allowed six women to enter the race, but insisted they begin ten minutes before the men. The women decided to strike. When the starter pistol fired, they sat down and held up signs pointing out the inequity of the situation. This deeply embarrassed the race officials, and since then, women have been allowed to compete with men and start at the same time.

In 1984 the Olympics added the Women’s Marathon. Molly Huddle first qualified for the 2012 London Olympics. She was now part of an organization very different than a team of one. She has worked hard through injuries and disappointments. Today, in addition to running, she is elevating other women runners through a podcast she’s created called Keeping Track: Women in Sports . In her podcasts, she highlights the stories of women track and field athletes often overlooked in the general media. It’s just the latest part of the impressive career that Molly Huddle has made by putting one foot in front of another, something she clearly loves to do.

Fun fact: According to her Wikipedia page, Huddle is credited in part for the female runner emoji.


Posted by Chemung County Historical Society at 4:00 AM No comments: