This summer I took on the challenge of visiting every single park in Chemung County.  When I started, I thought there were 72. Along the way I discovered a couple more. In the end, I visited 81 parks. My first park was the Catlin State Forest on June 1. My last one was Linear Park in Horseheads two days ago. In between, I got to see an amazing variety of parks within the county. There are tiny neighborhood parks, expansive wilderness parks, amusement parks, boat launches, and memorial parks. Some are very well-cared-for and much-used while other, frankly, are quite sad. I have my favorites but it was definitely worth visiting every single one. In honor of my epic journey, I've borrowed a song from Geoff Mack and re-written it as so many have done before me.


I was toting my pack along the Breesport North Chemung road
When along came a family in a Subaru with a camping gear load.
“If you’re goin’ to Park Station, Ma’am with us you can ride.”
And so I climbed into the back and sat with the kids inside.
The dad asked me if I’d seen a park with such natural bounty
And I said, “Listen, I’ve been to every park in Chemung County!” 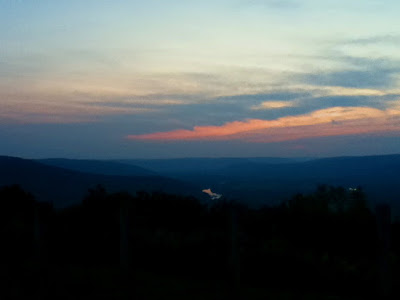 If you would like to see photos I took of all the parks visit http://cchsonlineexhibits.wix.com/parks#!photographs/c1vit. There are also links from that page to information on the locations and amenities of each park.

Posted by Chemung County Historical Society at 6:02 AM 2 comments:

When 18th Amendment and national Prohibition went into effect in 1920 (local prohibition went into effect in Elmira in 1918), brewers scrambled to find new ways to stay in business.  Some continued to produce beer illegally, but others found ways to work with the Volstead Act.  Under the new law, only “near beer” containing less than 0.5% alcohol could be produced and sold.  In fact, the law was so strict that this drink couldn’t even be labeled “near beer,” and instead had to be sold as “cereal beverage.”
In May 1927, the Chemung Beverage Company of Elmira received a permit from the federal prohibition enforcement agency to produce cereal beverage for 4 months.  At that time, they were only one of only two breweries in New York State permitted to do so.  As part of the permit agreement, federal prohibition agents were to inspect the brewery regularly to make sure all of the near beer met the Volstead standards. The Chemung Beverage Company moved into the old Briggs Brewery building, which had been abandoned for over a year. Employees cleaned up rust and dust for almost two months to make the space operational.
The Chemung Beverage Company didn’t stick with the “non-intoxicating beverage” business for long.  At 10pm on August 5, 1927, Federal prohibition investigator F.J. Raymond led a raid on the Chemung Beverage Company and discovered employees loading train cars with “high-powered brew.”  Employees Ed Kennedy, J. Heisler, Frank Schmalesberg, and Benjamin L. Heyman were arrested along with the owner and permit holder, Frank Teitlebaum .  There was an estimated $20,000 worth of beer at plant.

In September, the Chemung Beverage Company officially got its cereal beverage permit revoked.  In November, prohibition agents disposed of the 63,756 gallons (2,024 barrels of high-test beer and 400 barrels of near beer) seized by dumping it into the sewers. The building was padlocked and guarded.
In the fallout, Teitlebaum and the other men involved received hefty fines.  In May of 1928, Roscoe C. Harper, the Prohibition chief for Western New York, and Donald V. Murphy, the Prohibition agent in Elmira, were arrested for conspiracy to violate the National Prohibition Act.  Harper was the person who granted the permit to Chemung Beverage Company a year before.  The corruption and flouting of the Volstead Act continued in the city (as evidenced by the many subsequent raids of other brewers) until Prohibition was repealed in 1933.
Posted by Chemung County Historical Society at 6:30 AM No comments:

by Rachel Dworkin, Archivist
Everyone knows that war is serious business, but so, in its own way, is humor.  There are a number of competing theories about humor, its mechanisms, and its functions.  People frequently use jokes to defray tense social situations, resolve cognitive dissonances, and talk obliquely around difficult issues.  During World War I, magazines for both civilians and soldiers relied heavily on humor.

World War I began in the summer of 1914, but the United States did not enter the fighting until April 6, 1917.  From the start, the official policy was that of neutrality, but many people took sides based on familial and economic ties.
Towards the start of the war, the British navy established a blockade around German ports to keep them from receiving food and war supplies.  They began first turning around and then until President Wilson protested.  In retaliation for the blockade, German U-boats began sinking trading and passenger vessels bound for Britain.  On May 7, 1915, they sunk the RMS Lusitania, killing 1,198 civilians including 128 Americans.  The American public opinion turned sharply against the Germans and after several threats from the president they agreed to stop attacking passenger ships.   The resumption of U-boat attacks in 1917 was one of the major reasons for America’s declaration of war.


In October of 1915, President Wilson lifted a ban on loans to the warring nations.  He argued that the loans, and the purchases of food stuffs and manufactured goods paid for with the loans, would help bolster the American economy.  By the time America entered the war in 1917, its private banks and investment firms had lent $2.25 billion to Britain and France and another $27 million to Germany.
Upon entering the war, America drafted 2.8 million men into military service and, by 1918, was sending nearly 10,000 of them were arriving in France daily.  In keeping with the British tradition, these soldiers published humorous magazines including Yank Talks and The Gas Attack filled with cartoons, poems, stories, and jokes.  Soldiers used them to complain about and poke fun at their food, clothing, NCOs, Officers, and military protocol.  In some cases they also drew attention to some of the more ludicrous aspects of their lives in the trenches.
﻿﻿
For more information about historical humor, come to this afternoon’s Out to Lunch lecture “Hey, That’s Not Funny” at 12:05pm.  You bring your lunch, we’ll bring the cookies and comedy.
Posted by Chemung County Historical Society at 6:01 AM 1 comment:

Celebrating the Automatic Continuous Clothing Closure (a.k.a. the Zipper)

There are so many little conveniences in life that we take for granted. Do you ever give much thought to the zipper? Just imagine how different your life would be without that fastener. Okay, so the difference would probably not be very dramatic – you would have to button your pants and lace your boots – but zippers are spectacularly useful things.

The ancestor of the modern zipper was developed in the mid-19th century. In 1851 Elias Howe, inventor of the sewing machine, patented an “Automatic, Continuous Clothing Closure.” Howe never tried to market or mass produce his invention but his sewing machine was a great success.

In 1893, Whitcomb Judson patented a “Clasp Locker” that was similar to Howe’s invention. It was a complicated hook-and-eye fastener used on shoes. Judson and businessman Lewis Walker created the Universal Fastener Company to manufacture Judson’s invention. They debuted the clasp locker at the 1893 World’s Fair. Judson continued to make improvements on his fastening device and received another patent for the “C-curity” fastener.

Gideon Sundback, an employee of the Universal Fastener Company, is credited with designing the modern zipper. He made improvements on Judson’s C-curity fastener and received a patent for the “Separable Fastener” in 1917.
While the zipper as an object is a 19th century invention, the name zipper did not get applied to it until 1923. That year, the B.F. Goodrich Company started using Sundback’s fastener on its new rubber boots. They called the fastener the “zipper” and the name caught on. Boots and tobacco pouches were the first things on which zippers were widely used.

In the 1920s, manufacturers started putting zippers on clothing. One of its earliest uses was on leather jackets. The fastener was also especially popular on children’s clothing because it made it easier to dress squirming children and even let them dress themselves at a younger age. Today zippers are found on all types of products from clothing and shoes to housewares and camping items. What would we do without zippers?

Posted by Chemung County Historical Society at 5:40 AM 4 comments: