The Philo National Poultry Institute and the Business of Birds

As early as 1887, Edgar Woodruffe Philo attracted attention for his innovations in poultry keeping. That year the Troy Daily Times of Troy, NY reported that Philo perfected an apparatus in which alcohol is used to regulate temperature in incubators.  Philo's work was part of a larger climate of agricultural innovation.  By the late 19th century, scientists and amateurs undertook the challenge of improving and industrializing egg production. While much of this work took place at agricultural experiment stations or agricultural colleges, backyard farmers and other non-professionals were making an impact as well.  Philo was a part of this growing trend of men who made agricultural improvement their business through publishing, teaching, manufacturing equipment, or breeding poultry. 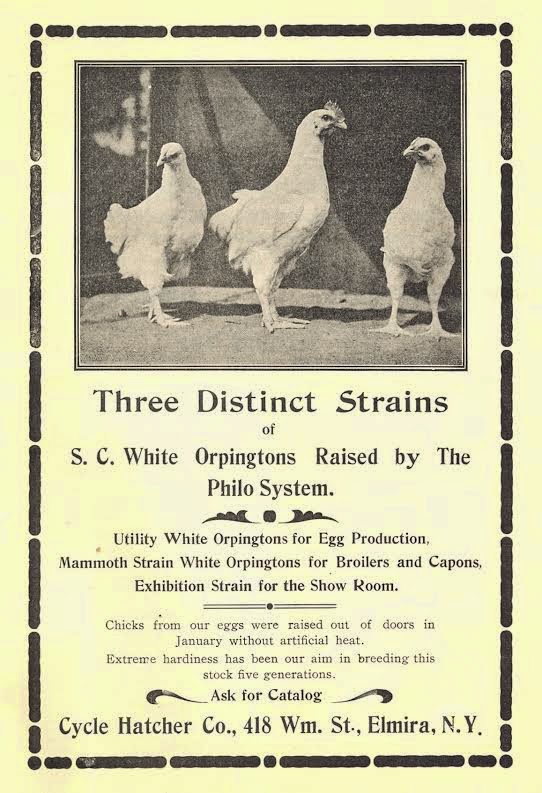 Philo moved from Salem, NY to Elmira, NY in 1906. He relocated his Cycle Hatcher Company to Elmira citing the city’s favorable business climate.  In fact, Philo and other businessmen were actively recruited by the Elmira Chamber of Commerce, which was trying to build the city's industrial standing.  Philo ran the business with his son E.R. Philo.
Cycle Hatcher produced brooding and hatching equipment. Philo claimed that the company was routinely filling orders as far away as Buenos Aires, Argentina and Johannesburg, South Africa. As an offshoot of the company, Philo also published his own poultry magazine, The Poultry Review. The Review featured articles and advice about best practices in poultry raising, many distilled from Philo’s own experimentation. By 1911, Philo claimed that the Review had a readership of over 100,000 people in each state and over thirty countries.
But Philo’s real crowning achievement was the creation of his Philo System and, later, the establishment of his Philo National Poultry Institute. Philo explained his system first in his book The Philo System of Progressive Poultry Keeping, first published in 1907.  His program was designed for small-scale production, like on a city lot, not for large farms.  His advertisements promised that followers of his system could make $1,500 a year from a small backyard flock.  Philo's system represented a radical departure from the work of many of his contemporaries. In the book, Philo contests that the theories of many poultry writers are “without foundation,” a claim he based on his thirty years of poultry experimentation and experience.
One of his major contentions was that artificial heat was unnecessary to raise birds. Philo argued, “When they come into the world they are supplied with an abundance of heat and all we have to do is retain it.”  In addition to being useless, Philo claimed that artificial heat could actually be dangerous for poultry. He also contended that heated brooders were simply too expensive and complicated to provide any benefit to one’s flock.

Philo’s objection to artificial heat was not only practical, it was also philosophical. He wrote that Americans have “endeavored to devise appliances whereby the chickens may be turned out like the output of great factories. Although the output may be unlimited, nature has something to say when its laws are violated to any great extent.”
The other unique component of Philo's system was his belief in the close confinement of hens. According to the system, two pound broilers were best raised when confined to a space of one square foot each. Pullets received one and one half square feet, while laying hens needed three square feet.
Philo's system was wildly successful and he made a small fortune selling his books, brooders, and teaching classes.  Eventually he built a 30,000 square foot building on Lake Street to house both the Poultry Institute and the Cycle Hatcher Company.  One floor of the building was dedicated to education, both for on-site and correspondence courses.  Another floor was exclusively for printing the Review and other promotional and educational materials.

The system and the Institute were not without controversy, however.  Most critics said that the system was simply too labor intensive to be worth it.  With it's strict feeding and cleaning schedules, the Philo System could be a full-time job.  However, one of Philo's harshest critics was John F. Graham of the Amherst Agricultural Colleges, who in 1912, accused Philo and others of lying about their profits.  He said of Philo, "he fishes for suckers and he gets them."

Ultimately, however, it wasn't his critics that drove him out of his business; it was his own family.  In 1917 he was ousted from the business by his two children after a bitter family fight.  Philo moved to Florida where he continued his work.  For years, Philo had been purchasing land in Florida to create a large model farm.  From there, he marketed his "New-Philo-Way," which doesn't seem to have deviated much from the original system.   Philo died in 1937.
Posted by Chemung County Historical Society at 6:17 AM 1 comment: 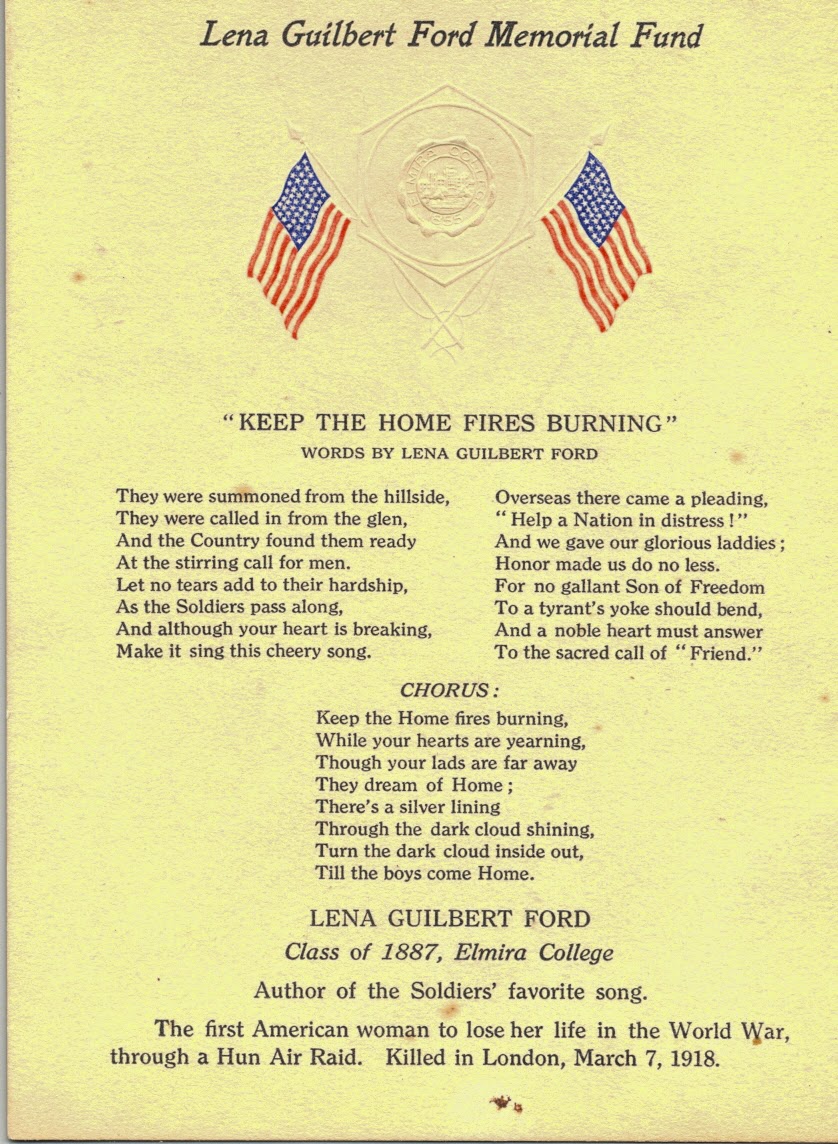 Posted by Chemung County Historical Society at 6:45 AM 4 comments:

In the Spotlight: Theatrical Makeup from the 1930s

Every once in a while, I come across a box tucked away in storage that I haven’t opened in my almost four years here. Sometimes, such a box contains unexpected treasure. Recently, I found one that contained a collection of theatrical makeup used at a local theater in the early 1930s. There were greasepaint sticks and powders and even little boxes of hair. I don’t know much at all about early 20th century theater makeup so I did a little digging.

There were quite a few pieces made by E.M. Stein Cosmetic Company in the box. The narrow cardboard tubes contain sticks of greasepaint in a variety of colors from skin tones to blues, greens, and pinks. Greasepaint became widely used by stage actors once gaslights became standard in theaters in the late 19th century. The powder makeup that had been used up until that point did not look good under the new brighter lights. If actors went without makeup at all, they looked washed-out and unexpressive. Applied correctly, greasepaint made actors look more natural under gaslight and under newer electric lights.

Stick greasepaint is made of dry pigments, such as zinc oxide, ochre, and lampblack, mixed with a waxy base, like lard, tallow, beeswax, or paraffin. To apply greasepaint, actors first covered their faces with an oily base like Vaseline so that the makeup would come off more easily later. A flesh-tone base color was applied first followed by darker and lighter shades for shadows and highlights. Then color was added to the eyes and lips. Finally, loose powder was dusted all over the face to set the makeup.

Commercial greasepaint first became available in the 1890s. The makeup moved from stage to screen in the early days of motion pictures. Traditional greasepaint, however, proved to be too heavy and did not look good on film. In 1914, Max Factor developed a lighter cream greasepaint for use in movies. His new formulation was sold commercially as Supreme Greasepaint. Max Factor is also credited with coining the term “makeup.” Before the 1930s, proper women did not wear cosmetics but as Hollywood starlets began wearing makeup in public, regular women followed suit.

This collection of theatrical makeup was a wonderful find. I can just imagine actors at a local theater putting on their costumes and makeup so they could step out on stage and entertain a packed house.
Posted by Chemung County Historical Society at 5:40 AM 2 comments: