The Birth of a Landmark

On March 23, 1929 the brand new Mark Twain Hotel opened at the corner of West Gray and North Main Streets in Elmira. The opening was a grand event with a gala reception, speeches, music and dancing that lasted until the small hours of the morning. Six hundred invited guests came to see the finest hotel between Buffalo and New York City. The local newspapers of the time were filled with stories of the hotel’s opening. The architecture, layout and décor of the building were described in fine detail as were the fashions worn by those attending the opening event.  The new hotel boasted 250 rooms (each with its own bath), five dining rooms, four restaurants, three elevators, convention facilities and a ballroom that could accommodate 350 guests.  The hotel’s Georgian architecture was praised for blending stately dignity with the air of hospitality. 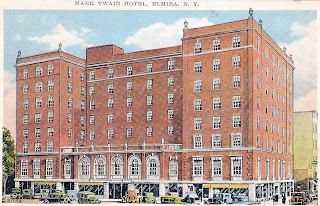 The hotel was designed by George Post who has been credited with developing the standard plan for modern hotels with double loaded corridors and a bath in every guest room.  While planning took nearly 25 years, Lowman Construction Co. of Elmira was able to build the hotel in less than a year at the cost of nearly $1 million.  It was named, obviously, after the writer Mark Twain. The names of various rooms referenced his life and literary works and were decorated to match the theme. The coffee shop, for example, was called the Mississippi and had murals of the river around the walls.  A riverboat’s pilot wheel decorated one dining room and a famous mural on the second floor depicted Huck Finn and Jim from The Adventures of Huckleberry Finn. 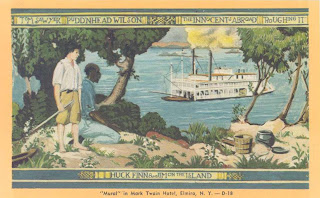 The Mark Twain Hotel saw its golden era during WWII and in the post-war years. By the 1960s, though, travelers had come to prefer staying in motels and the hotel went into decline.  In 1973, after almost 45 years in business, it closed to the general public. Mark Twain Properties, Inc. purchased the building and converted it into apartments and office spaces.  Today, the Mark Twain Building keeps its connection to the past with a museum of artifacts and memorabilia on the second floor that celebrates the history of the hotel.

Posted by Chemung County Historical Society at 6:52 AM