One of the most well-know residents of Horseheads was Eugene “Zim” Zimmerman (1862-1935).  Zim was a world-famous cartoonist and humorist.  When he settled down in Horseheads in the late 1880s, not many of his neighbors knew how famous he actually was.  His artistic talent and determination took him from an early life in poverty to international notoriety.

Eugene Zimmerman was born in Basel, Switzerland on May 25, 1862.  His mother died when he was just two years old and he went to live with his aunt and uncle in Alsace, France. When the Franco-Prussian war broke out in 1870, his father brought him to the United States. From then on he was always working some job or other.  He delivered newspapers, did odd jobs at the bakery at which his father worked, worked as a chore boy on a farm, and cleaned bottles in a beer and wine shop.  Eventually he became an apprentice to a sign painter.  In 1878 the sign painter moved to Elmira and brought the 16-year-old Zim with him.

Zim worked at the sign painting shop at the corner of East Water Street and Railroad Avenue for several years before taking a job as the head of the pictorial staff at a rival company, Empire Sign Co. in Horseheads.  During that time, he experimented with drawing cartoons and caricatures.  He kept a sketchbook of his drawings in watercolor and other media.  He took the sketchbook with him on a visit to New York City in 1883 and it found its way into the hands of Joseph Keppler of Puck magazine.  Keppler was impressed with Zim’s work and hired him.  In 1885 Zim left Puck for a job at the rival publication Judge.  He worked for Judge for almost thirty years.

Zim married Mary Alice Beard of Horseheads on September 29, 1886.  He made his permanent home in Horseheads then even though it meant traveling to New York City every week for conferences with Judge staff.  He had a studio in his home and also had an office in Hanover Square out of which he operated a correspondence course in cartooning, comic art and caricature.  He was an active member of the Horseheads community.  He served as a Village Trustee for a time, he was a member of the Rotary Club, and a member of the volunteer fire department.  He also organized a band and designed the bandstand in Teal Park.

While Zim was best known for his political cartoons, comic illustrations, and caricatures, he was also an inventor.  In 1902 he applied for a patent for a fire extinguishing apparatus. After a disastrous fire at St. John’s military academy in Manlius, New York, Zim began working on an automatic fire extinguisher.  His son was attending the school at the time and lost all of his personal belongings in the fire that started in an unoccupied room.  Zim’s invention would automatically release a spray of fluid if a fire broke out.

Eugene Zimmerman died of a heart attack on March 26, 1935.  He was such a respected and beloved member of the community that businesses and public schools were closed during his funeral.  All remember him as a quiet and unassuming man who was kind and generous to all.  His dedication to his work lasted, literally, until his death.  For many years he had written a newspaper column as “Ea Zy Pickin’ the Rustling Reporter.”  He wrote his last column on Monday night and it reached the editorial room Tuesday morning shortly after his death.  With the copy was a note that read: “Use what you can of this.  I’m full of pills of every color and kind and I hope when all repairs are made I’ll be good for another marathon.  Please send me a proof when typed, Zim.” 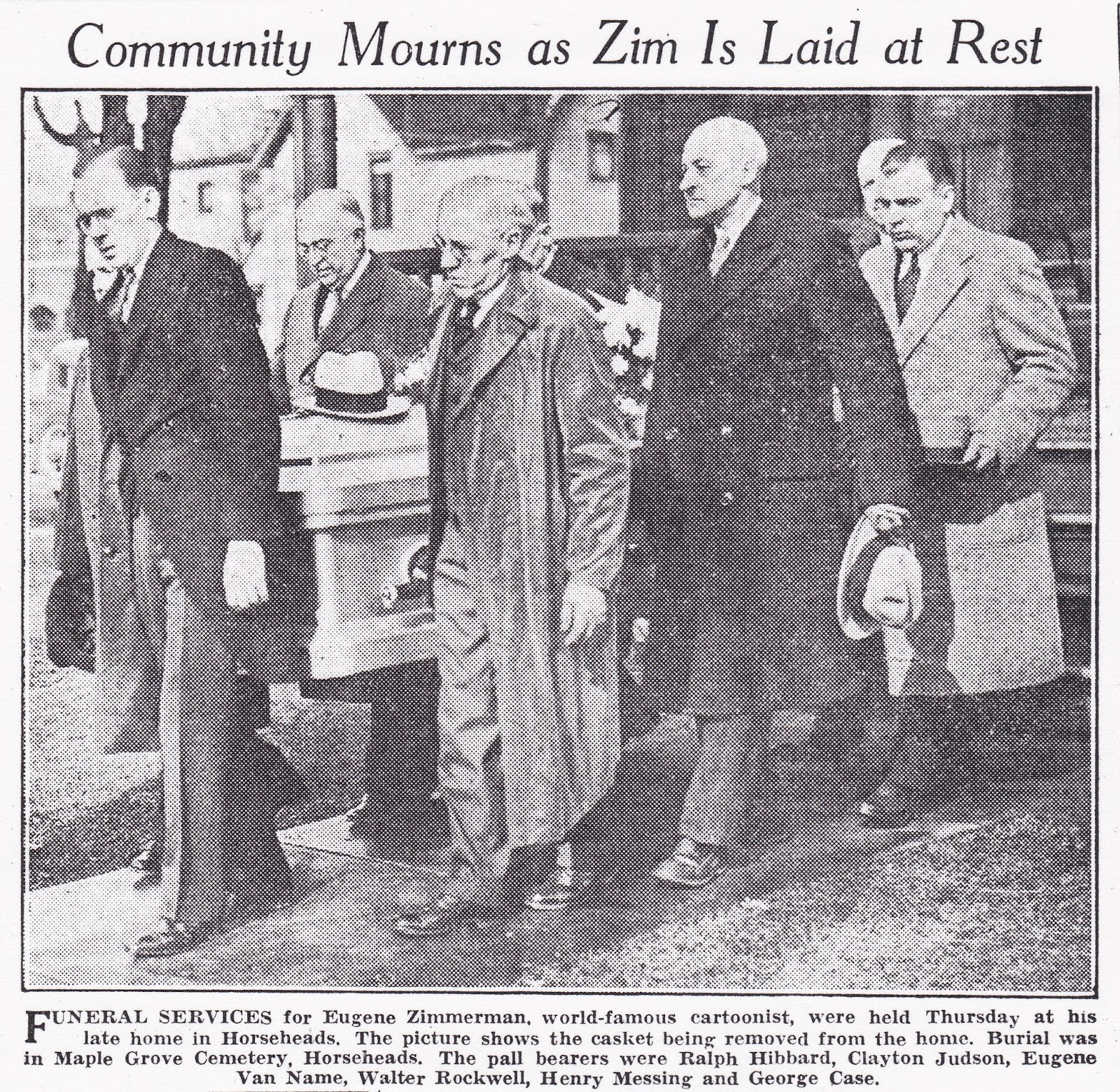 In 1980, Zim’s daughter, Laura Zimmerman, conveyed his home that was built at 602 Pine Street in 1890 and its contents to the Horseheads Historical Society.  It contained many of Zim’s possessions, a large number of his works, and both personal and professional papers. His last drawing was still resting unfinished on its easel in his studio.  The Zim House is open to the public by appointment.  To schedule a tour, call the Horseheads Historical Society at 607-739-3938.

To learn more of the history of Horseheads, join us on Thursday, August 7 at 7:00 pm at the Chemung Valley History Museum for the ribbon cutting of our new exhibit: The Towns and Villages of Chemung County: Horseheads. This exhibit will be on display through January 2015.

Posted by Chemung County Historical Society at 5:47 AM