The Mystery of The Nine Pointed Star


In September 2014 our boys and I were walking from the Steele Memorial Library to the car I noticed something on the sidewalk I hadn’t seen before. At first I thought it might be a marker of some kind left by the city DPW, perhaps a benchmark used by surveyors, but on closer inspection I found the object to be a metal medallion secured to the sidewalk. It was a couple inches in diameter, with a nine pointed star on it. Across the star were the words, “NinePointedStar.com 2010”. 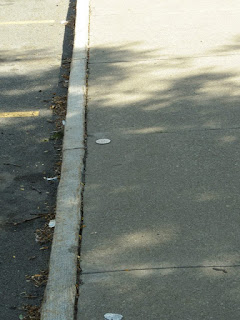 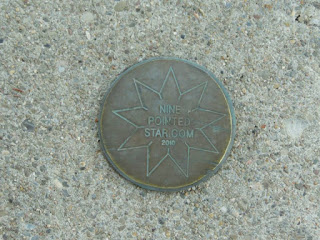 I filed that one away and figured I would look it up online when I had a moment, curious to see what the website with such a clever and unique marketing plan was all about. What I was to find was a mystery that still has me stumped.


The website address took me to the website of an artist in the San Francisco Bay area, Kelly Booth. Most of her website shows her portfolio and background information but it also includes a page where she keeps track of medallions that have been found. Kelly says she has no idea what the medallions mean, didn’t even know they existed until people began e-mailing her about them, saying it was something that was already happening when her site went live in 2012. She says that the first medallion was found in 2010 and they have continued to pop up across the country ever since and on her page includes a list of theories of what they might mean. One theory from a teenager in South Carolina says they could have been placed by aliens marking places deemed worthy of saving should they decide to come back and destroy Earth. Another theory is that they are a musical tribute to heavy metal band, Slipknot, who, prior to the death of their bass player Paul Gray in 2010, came up with a nine pointed star symbol, one for each of their nine band members.  Some say the medallions are a way to pay tribute to him.


Other theories include the medallions being a part of a role playing game, a tribute to a popular classic video game, “Myst”, a geocaching game, or there’s some connection to the Baha’i faith, which uses the nine pointed star to represent the nine great religious traditions of the world.


In other words, no one knows for sure.


I contacted the staff at the Steele Library, and no one knew anything about the medallion, which surprised me. So I e-mailed Kelly at her website and asked her if the medallion in Elmira had been reported to her yet. As it turns out, I was the first to contact her about it and ask her some more about the mystery of the medallions. Kelly swore to me it was the truth: She had no idea what they meant, where they came from, or who was behind it all. She told me she found it kind of funny that everyone thought she was behind it. “I wish I did have the time and money to travel all around gluing stars to sidewalks.” But in the end, she said she is just as curious as everyone else about what they mean.


With all apologies to Kelly, I spent several hours doing some background searching. On her site she openly discusses her personal connection with the nine pointed star symbol, and that when traveling she would leave one behind made of sticks or other natural materials, so I wasn’t completely convinced she didn’t know more than she was letting on. I did a search of the site domain which was originally registered in July 2002, although whether Kelly was the original owner or not was unclear. I found it strange that the domain wasn’t actually used for ten years after it was registered but long story short I couldn’t put a connection to Kelly or any of the dates. And it didn’t make sense that one person would travel the country placing them, even for a well traveled person like Kelly. In the end, there was no rhyme or reason to it, no matter how hard I tried to find it. There appears to be no connection or pattern to the medallions as plotted out on Kelly’s map. The only connection with the medallions was that the one I found was that it was in a group of three with human names:  Elmira NY, Anthony KS, and Elizabeth NJ. 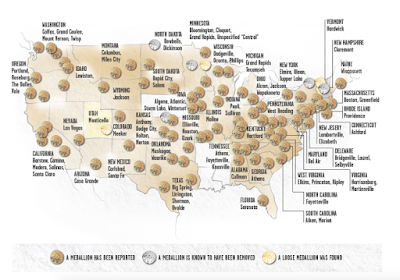 In the end, I was unable to solve “The Mystery of The Nine Pointed Star”.


In February 2015 I decided to stop by the library to get a book. As was my habit I checked to make sure the medallion was still there and it wasn't. Thinking perhaps I "mis-remembered" its exact location I went to check under a small pile of snow on the sidewalk and noticed a round thing on the pavement next to the curb. Sure enough, it was the medallion, and judging by the scratches on the surface I figured it had been dislodged by a passing snowblower. At the time no one seemed interested in it so I took it home for safekeeping. ( If, as some have joked, the medallions are a portal to the underworld I could be in deep trouble. )


At the I discovered the nine pointed star medallion in Elmira, there were 70 such medallions across the country with two others in New York, one in Olean and one in Tupper Lake. Since then the number has increased to 91.


What do they mean ? I haven’t a clue. To read more about the medallions and the theories behind them go to http://www.ninepointedstar.com/medallions/

Posted by Chemung County Historical Society at 6:35 AM