The museum has recently received a couple objects related to the USS Chemung. Many people are familiar with the Navy tanker that served through World War II, the Korean War, and the Vietnam War but I will admit that I had never heard of it until I started working here. The ship has a long, interesting history of tragedy and triumph. The Chemung was one of the largest, fastest tankers afloat during the Second World War, it was the first tanker to ever circumnavigate the globe, and, for a time, it was blamed for causing the deaths of 225 sailors aboard the USS Ingraham.

The tanker was first launched in 1939 by Standard Oil Co. of New Jersey. It was christened ESSO Annapolis. In 1941, the U.S. Navy commissioned the ship to join its tanker fleet and renamed it USS Chemung. Navy tankers are traditionally named after rivers and this one was named for the river that runs right through our county. In the beginning it was used to transport fuel oil between Texas and Louisiana oil ports and east coast ports but within months it was making trans-Atlantic deliveries.

The main duty of the Chemung was refueling aircraft carriers, destroyers, cruisers, and battleships while they were at sea. William M’Gaffin, Special Correspondent to The Chicago Daily Times during World War II described such a refueling operation:
A big essex class carrier is selected and the tanker pulls alongside. A light line is shot across, then a messenger, and finally a rope to which is tied the pythonlike hose. A destroyer comes along on the other side, hoses are sent across to her, then telephone lines to the hose station, while the other wires connect the bridge with hers.
The ships continue moving at fast clip through the sea, in the direction of the enemy.
“We’re ready,” comes the word over the telephone. “Start your pumps.” “The pumps are started,” goes back the answer.
The thick, black oil begins to flow through the hoses as the three ships proceed through the water. Keen-eyed helmsmen, the key men in the operation, keep the ships steady, even distances from each other.
The fuel gurgles swiftly now through the snaky hoses, suspended limply on curved wooden saddles tied to booms projecting over the water. They are tended by hand on the big ships, by winch on the tankers. They are paid in and out gradually to compensate for the occasional widening and narrowing of the distances between. Three or four destroyers are re-fueled while the carrier’s thirsty innards are being filled.”


The Chemung crossed the submarine-infested waters of the Atlantic Ocean 28 times during World War II but it did not come through the “Battle of the Atlantic” unscathed. On August 20, 1942 the tanker departed from New York with a convoy bound for the United Kingdom. Two days later, it collided with the destroyer USS Ingraham. The Ingraham was in the process of trying to recover survivors from the USS Buck which had just had its stern sliced off. The depth charges in the stern of the destroyer exploded and it sank almost immediately. All but 16 of the 241 men aboard the Ingraham were lost. The Chemung lost 30 feet of its bow and caught fire. Despite having a full load of fuel, it did not explode and the fire was extinguished without any loss of life. The tanker reached Boston on August 26 for repairs. For years, the Chemung was blamed for causing the collision but a confidential inquiry eventually absolved the Chemung of responsibility.

After repairs were completed, the Chemung went back into service. It took part in the North African invasion and was attached to the task force that invaded Sicily, Anzio, and Southern France. It even fueled Roosevelt’s convoy to Yalta in 1942. In 1945, the Chemung became the first tanker to circumnavigate the globe. It left Norfolk on July 18 and passed through the Panama Canal for service at Okinawa. In October it left to return to the United States, this time passing through the Cape of Good Hope. It finally arrived back at Norfolk on December 6. Over the course of the war, the Chemung pumped 174.3 million gallons of gas, logged 250 million sailing miles over 10 seas and oceans, and earned the nickname “Life Line of the Fleet.” 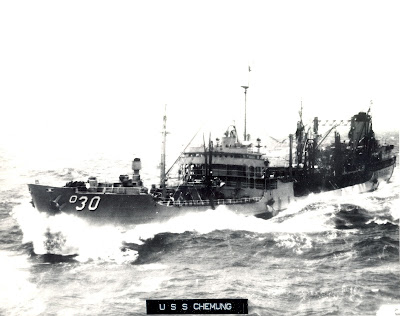 The Chemung operated with the Atlantic Fleet from November 12, 1948 until March 17, 1950 when it sailed for San Diego. It was decommissioned in July of that year and placed in reserve. It was recommissioned in 1950 for service in the Korean War and continued as part of the tanker fleet through the Vietnam War. The “Mighty Mung” received two battle stars for its World War II service and four for its service in the Korean War. The tanker was finally decommissioned on September 18, 1970 and scrapped. CCHS has a large collection of objects from the USS Chemung including ashtrays made from shell casings from the tanker’s guns, commemorative lighters, playing cards, and hats, and a sweater from the on-board basketball team. We also have a ceremonial plaque from the tanker that was presented to the museum in 1971 by the U.S. Navy through the Horseheads Naval Reserve.

Posted by Chemung County Historical Society at 5:29 AM