“I am unable to understand why a woman performing exactly the same duties as a man should receive less compensation for her services,” wrote New York Governor Alfred Smith when he signed the Teachers’ Salary Act in 1924, which was supposed to eliminate pay discrimination due to gender.  Women had just earned the right to vote and equality was a hot topic.  Unfortunately, despite this new mandate, pay equality didn’t come immediately for all female teachers.  Rena Rockwell, a teacher and head of the history department at the Elmira Free Academy, made it her personal mission to change that. 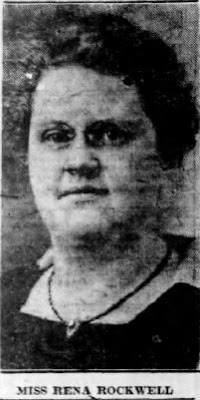 In the 1920s, Rockwell was the president of the Elmira Teachers’ Association and used her post to advocate for equal pay legislation.  In May 1924, Rockwell went to Albany advocating for the equal pay act.  She expressed her embarrassment that Elmira was the only place to send both a mayor and a female Board of Education member to fight against the bill.  Still, the bill passed and Rockwell said, “The pleasure of hearing those men who have blustered so often in state association meetings and other gatherings of teachers, humiliated by the governor’s searching questions, was worth the trip to Albany.”  She also noted, “we in Elmira are not to reap immediate fruits of victory in any increased pay.  But there is a much bigger victory than the financial, the victory of principle.  It remains for us all to reap fruits according as we sow… Remember that this is part of the whole movement for the rights of women.  We have the suffrage: much else we have not yet.”

True to her word, Rockwell continued her battle for the “fruits of victory” for Elmira teachers.  She took the Board of Education to court and on June 9, 1925, New York Supreme Court Justice Leon C. Rhodes decided that Rockwell was entitled to pay equal to that of her male colleague Ralph S. Austin.  Rockwell asked the court to force the Board to increase her annual pay from $2,000 to $2,100.  Austin received $2,100 even though he did the same work as Rockwell (he arguably did less than her since she was also head of the department).  The Board of Education claimed, however, that the Legislature had no right to decide the details of teacher contracts and that pay raises would hurt the city’s budget.  Judge Rhodes decided in Rockwell’s favor and ordered she be paid the $2,100 salary and back pay. 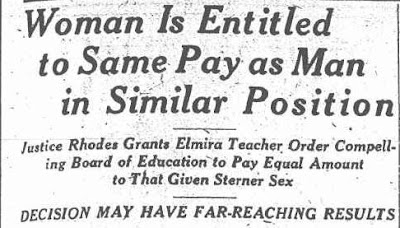 Despite setbacks in Elmira, Rockwell’s work inspired other cases, particularly in Syracuse.  In 1927, Cornelia Moses, a Syracuse teacher, became the center of a similar pay case and was able to close the pay gap, but again, the appeals court found that there still could be differences in pay as long as gender wasn’t the only reason for the discrepancy.

Rockwell still continued her work advocating for teachers and in October 1926 she was elected president of the Teachers’ Welfare League of New York State.  She continued to be a driving force in state and local politics for the rest of her life.  When she died in October 1947, she was hailed for her political action.  The Elmira Star-Gazette wrote, “No one knew better than she that many disagreed with her opinions; but everyone respected her faithful, spirited adherence to what she believed to be right.”
Posted by Chemung County Historical Society at 4:14 AM