by Rachel Dworkin, archivist
In recent years, several companies have unveiled new virtual reality devices designed to give users an immersive experience.  In June 2014, Google released Cardboard, a 3D virtual reality platform for use with special mount for a smartphone.  The mounts are relatively cheap (less than $5) and there are already thousands of apps and videos which users can view.  One app, called Expedition, allows students to use Cardboard to take virtual tours of historic and cultural sites from around the world.  It’s deeply cool, but it is also not as innovative as you might think.


In 1851, David Brewster presented the Brewster Stereoscope, which he had developed with Professor Elliot and Jules Duboscq, to Queen Victoria at the Great Exhibition.  This kicked off a 3D craze with stereoscopes and stereoviews selling like hotcakes.  The idea behind the technology was simple and, in fact, mimicked the way human eyes naturally work.  Each stereoview featured two near-identical images side by side.  The two lenses in the stereoscope allowed both images to be viewed simultaneously, one by each eye, creating the illusion of depth.  In case you were wondering, that’s also exactly how Google Cardboard works too.

In 1861, American inventor Oliver Wendell Holmes created, but specifically did not patent, a simplified version of the Brewster Stereoscope.  The original version was rather bulky and had involved multiple lenses which made it rather costly.  The Holmes Stereoscope on the other hand, was a simple wooden frame with just two prismatic lenses and, thus, a whole lot cheaper to make.  The average one sold for $.20 at a time when you could get a good wool coat for $28.


The simple Holmes Stereoscope quickly became a staple in most American homes, mostly because, without television, people had to make their own fun.  People collected cards of famous historic and cultural sites from all over the world.  We recently received the Hoefer Family stereoview collection.  Rosina & John Jacob Hoefer lived in Elmira, but had 68 images from 6  different countries, as well as views of important historical figures and from around New York State.  With them, they could explore and virtually visit places they could never reach in person.  Sounds familiar, right? 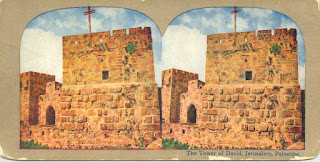