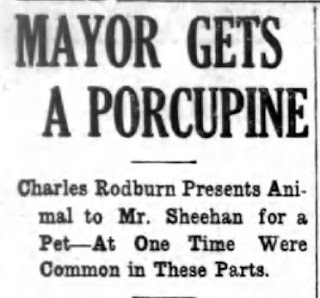 In 1933, City Clerk William T. Coleman had a strange complaint come across his desk. A man’s pet porcupine routinely followed him to the store and, one time, had an unfortunate run-in with another person’s dog. The dog owner complained to Coleman that the “porky” shouldn’t be allowed on the streets. Coleman talked to the porcupine owner and they agreed on reasonable limits for the spiky pet.
Posted by Chemung County Historical Society at 5:11 AM