Gender Bending in the Late 19th and Early 20th Centuries

We have a fantastic set of glass plate images in our collection of a group of friends or family in the early 20th century who seem to have been having a lot of fun swapping clothes. The men are dressed in skirts, women's hats, cloaks, accessories, and even some underpinnings. The women are in pants, men's hats, and even sport some fake facial hair. All in all, this group with their party scenes, complete with alcohol, counter some of people's preconceived notions about gender in the Gilded Age and Progressive eras. In a time we often assume is overrun with Victorian prudery, people played with gender norms and performance. The main way this manifested was in female impersonation. To be clear, this is not the same as our modern understanding of being transgender, gay, or a drag queen. Female impersonation, as discussed in this blog post, was a popular and respected theatrical specialization. 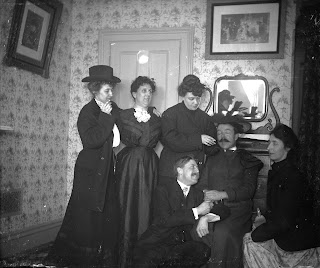 The origins of men dressing as women in theater dates back centuries. Common in Shakespearean performances and in those by all-male troupes, female impersonation began, in part, as a necessity. Fast forward to the 19th century, and female impersonation was a staple of traveling minstrel troupes, which again, were mostly male. These roles were often played for comedic value, and in the case of minstrel shows, they often upheld racial and gender stereotypes.

By the early 1900s, Julian Eltinge was the most famous female impersonator. Known for his uncanny portrayal of a woman in Vaudeville, on Broadway, and later in film, Eltinge was a celebrity. Eltinge toured the world, and made appearances in Elmira.
But there were other performers, too, even if they didn't match Eltinge's fame. In 1892, Elmirans Fred Gibson and Harry Graves found fame in Vaudeville. In one act, the did "a small dude song and dance, changing in full view of the audience to a female impersonation skirt dance." Elmiran Matt Lockwood, an actor and costumer, was known for his humorous female portrayals, especially of old women. A performance by the Elmira Free Academy minstrels in 1910 featured, as its main plot point, a female impersonator who infiltrated a fraternity house. The humor came when "he unmasks to the dismay of his amiable fraternity brothers who have accorded him the most flattering courtesies." That same year, the members of Company L enjoyed a performance by a female impersonator named "Lottie Duval." The performance was so "clever" that some of the men didn't know he was a man until he took off his wig.

In 1923, the Cornell Masques performed "Listen to Me" at the Lyceum Theater, which featured student Al Force in the role of Peggy Lang. We have a composite photograph of Force in both his street clothes and his Peggy costume. The next year, former Elmiran George Bracken worked with the Neil O'Brien Minstrels, performing twice per show as a female impersonator.


Cross-dressing in the theater served many purposes. It was sometimes about trickery, but often the actors were not really trying too hard to disguise their actual gender. And while I've focused primarily on female impersonation in this blog, male impersonation was also a popular theatrical attraction in this period. Ultimately, impersonation was supposed to be fun entertainment, and we can see from photographs like those from our collection, how this spirit of lighthearted gender-bending bled into the lives of non-actors.

Posted by Chemung County Historical Society at 5:12 AM