Every year since 1959, the city of Sapporo, Japan has held a lilac festival in downtown Odori Park. What, you may ask, does that have to do with Chemung County? Well, if not for the efforts of Elmira missionary Sarah Clara Smith, there would be no reason to celebrate. Smith brought the first lilacs to Sapporo from the United States in 1889.

Sarah Smith was born in Painted Post on March 24, 1851 and grew up in Elmira. She attended the Elmira Academy before going on to Brockport to become a teacher. After graduating, she returned to Elmira and taught at Diven Elementary School for several years. She may have continued her career as a local school teacher if not for the sudden death of her brother, who was an evangelical pastor. His death caused her to reevaluate her path in life.

Smith was a member of the First Presbyterian Church in Elmira. Rev. G.W. Knox was the son of the pastor at the church and was involved in missionary work in Japan. Rev. Knox told Smith about a newly established women’s seminary in Tokyo that was looking for female missionaries to join the staff. He was willing to recommend her for the position if she was interested. Encouraged by the memories of her deceased brother, Smith gave up her job and life in Elmira to become a missionary.

In the fall of 1880, Sarah Smith arrived in Tokyo, Japan. While she enjoyed her work, she was not well-suited to the region’s climate. The excessive dampness caused her to suffer from severe rheumatic problems. Her doctor recommended that she return home but she refused. Instead, she moved north to Hokkaido, which had a much dryer climate. Smith taught private English and Bible classes in Hakodate, a port city in Hokkaido, as she convalesced. In 1886, she took a position as an English teacher at a new school in Sapporo, the capital of Hokkaido.

Smith’s two great passions in life were religion and education and she was determined to bring both to her new home. On January 15, 1887, she opened her own private school – Sumisu Jogakko or Smith’s Girls’ School – as the first girls’ school in Sapporo. The Governor of Hokkaido gave her permission to use a small stable as a classroom and she used her salary from her job as an English teacher to fund the school. She started out with just seven students. In 1894, the school relocated and expanded. Its name was changed to Hokusei Gakuen or Northern Star Women’s School, inspired by a Bible verse, Philippians 2:15: “shine like stars, in a dark world.” Hokusei Gakuen still exists today as a four-year private university.

For nearly 45 years, Sarah Smith provided a Christian education to girls in Sapporo. Her efforts, however, were not without controversy. There was a significant Christian population in the area when she arrived and her goal was to see her students, “the future mothers of Japan, safe in the Christian faith.” Yet, many of the girls faced opposition from home to conversion. In a letter from Smith to the Ladies of the Foreign Missionary Society of Chemung Presbytery in 1907, she wrote that many parents said that when their daughter is of age she may do as she likes but gave various reasons for not permitting her to become a Christian yet. That same year, the Emperor’s birthday fell on a Sunday, the day of rest. The school celebrated on Monday and subsequently received a letter of censure for having honored God before the Emperor. There was talk in government offices about closing the school but no punishment was imposed. In fact, in 1923, Smith was awarded the Imperial Decoration of the Order of Sacred Treasure for meritorious civil service by the Japanese government.
The Foreign Missionary Society, and in particular the Chemung Presbytery, provided support through the years to Smith’s school. They donated money and materials and helped to spread news of her work by sharing letters she regularly wrote to the organization. Smith returned to the United States several times. During these visits she would speak at events held by the Women’s Missionary Society in Elmira. After a visit in 1899, she returned to Sapporo with 200 dolls given to her by the Society to distribute as Christmas gifts to her students. Every one of the dolls made it through the long passage without any damage.

Ten years earlier in 1889, Sarah Smith brought lilac seedling back with her from a visit home. She planted the trees at her school and over time, they naturalized and spread throughout the region. During World War II, most of the lilacs were cut down because of their origins from the United States, a hostile nation. A few did survive including one that was preserved at the Hokkaido University Botanical Garden, the second oldest botanical garden in Japan. In 1960, the lilac tree was designated the official tree of Sapporo. 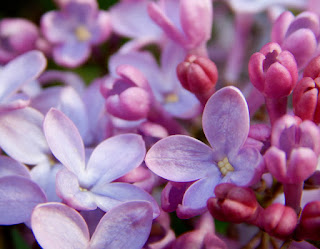 Sarah Smith spent 51 years of her life in Japan. She finally returned to the United States for good in 1931 at the age of 80. She passed away on February 18, 1947 at the age of 95 in Pasadena, California.

Posted by Chemung County Historical Society at 5:25 AM