Rufus Stanley moved to Elmira in June, 1886 to work as the Secretary of the Boys Department of the Y.M.C.A. On his first Saturday here, he borrowed a camera and took a hike up East Hill with a group of boys he was working with at the Y. They explored Water Cure Glen and got pictures of Mark Twain’s summer home. This was the beginning of the Rambling Club and a lifetime of public service for Stanley.

Stanley grew up in rural Michigan and enjoyed the outdoors and working with his hands. When he went on that first hike in Elmira with his young charges, he realized two things: “that these city boys did not know anything of the world about us and that they could not do anything.” He devoted the rest of his life to teaching young people useful skills. The Rambling Club was his first effort. Stanley formed numerous other clubs including the Omega and Achievement Clubs meant to help both boys and girls learn things like gardening, poultry raising, and carpentry.

For twelve years, Stanley led the boys of the Rambling Club on hikes around the region, both winter and summer, rain or shine. They tramped, camped, swam, coasted, tracked rabbits, and climbed trees. They learned how to build fires, find shelter, and not mind the mud. They also toured worksites, railyards, and factories, sailed on Keuka Lake, and went on longer excursions. In 1898 he took ten boys by train to Pittston, Pennsylvania then they hiked back to Elmira visiting historic sites along the way.


At any given time there were about 10 boys in the club. Their ages ranged from 12 to 15 years old. The boys themselves chose who could become members and they also governed their own conduct. There was no official constitution or written laws but they all seemed to understand that common courtesy was expected. No smoking or swearing was allowed but the boys could and did play regular pranks on each other.

Through the Rambling Club, Stanley was able to provide the boys with wholesome outdoor recreation and teach them lifelong skills. Rambling also gave them a chance to be rambunctious without getting into any real trouble. Stanley once wrote, “Every real boy must yell.” Sometimes on hikes, they would stop at some out-of-the-way place and just yell until all their pent-up energy was spent. “It does no harm in the woods, though in town it would be liable to call the police.”
By 1896, ten year after the club had begun, many of the boys were getting older, finishing school, and starting careers. They weren’t able to participate in weekly rambles as they once had. This led to the creation of the Night Walkers. The boys, or rather young men, continued to get together and got for walks in the evenings after work. The Night Walkers continued getting together for ten more years before dissolving in 1906.


The Rambling Club officially ended in June 1898. Stanley went on to create new clubs to continue teaching youngsters practical skills while the more than 100 boys who had rambled with him went on with their everyday lives. In 1926, former ramblers were called together for a reunion to arrange plans for a celebration in Elmira to mark 40 years of Stanley’s work. On July 8, 14 club members and their former mentor met on the lawn of Merle Thomson on Hoffman Street in Elmira.

One of the men attending the reunion wrote an account of the event. They gathered in Thompson’s back yard and built a fire near the edge of the woods. Everyone pitched in and got the fire going, got water for coffee, and cut sticks for roasting hotdogs, just like old times. After a nice “dog and doughnut” supper, they got together to have their picture taken.  Then everyone settled down and listened as Stanley spoke to them about the importance of the movement that had started with the Rambling Club and his efforts to keep things going. He declared that should he die that night, the work was so well-organized that it would continue uninterrupted.

Stanley had been at a picnic earlier that day in VanEtten promoting his efforts to educate more children and would be talking at several more upcoming picnics that summer through August. “You can see that I am going to be busy,” he told them then placed his hands on his head as if thinking of something more to say. He sank slowly backwards and fell to the ground. Dr. Anna M. Stuart and Dr. N.H. Soble were called but they could do nothing for him. Rufus Stanley died of a heart seizure at 8:15pm. His boys covered him with a blanket and he lay with his feet to the dead embers of the camp fire, like he was peacefully sleeping, as he had done so many times before on club outings. When his wife, Charlotte Rose Stanley, arrived, she told them, “It was a beautiful way for him to go, and among the members of the old Rambling Club, who loved him, and whom he loved so much.” 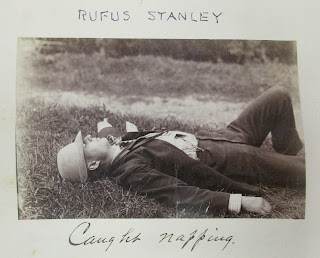 Rufus Stanley is buried in Elmira’s Woodlawn Cemetery. A monument honoring his work with the area’s youth is on display at Harris Hill Park.

Posted by Chemung County Historical Society at 6:00 AM