A Universal Language: Volapük in Elmira

Can you read the following phrase and figure out what it means?
Del binon jönik

No? It’s ok, neither can I nor most people. It’s not from a language that most of us are even familiar with. It’s Volapük (the phrase translates to “The day is beautiful” and come courtesy of www.volapük.com). Volapük is a constructed language created by a German Catholic priest named Johann Martin Schleyer in 1880. Schleyer’s goal was to create a universal language. His creation took off, with people learning the language all around the world. Even right here in Elmira.

Several Elmirans were listed in Volapük journals in the late 1880s and early 1890s, including E.J. Beardsley, T.W. Roberts, Marcia D. Gibbs, Horatio N. Greene, and John Bartholomew. At the 1891 annual meeting of the Academy of Sciences in Elmira, Vice President Isaiah B. Coleman introduced the prospect of a lecture given to the society in Volapük.

Dr. Charles Woodward was our local Volapük expert and seemed to be a bit of an all-around lover of linguistics. He attended the North America World Languages Association meeting in Chautauqua in 1891. In 1894, he was trying to get a petition to Congress that would require all public documents to be written with phonetic spellings. He wrote a lengthy letter to a Volapük journal in which he talked about the need for a standardized phonetic alphabet. 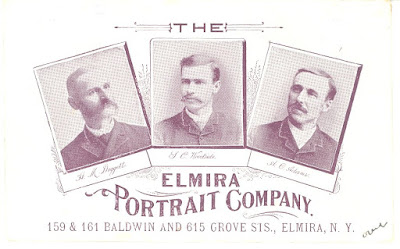 A local business also got in on the Volapük trend. The Elmira Portrait Company placed this advertisement in an Australian Volapük journal:

From that ad, they got an order from Cairo, Egypt for a large colored portrait in 1893. The company fulfilled the order and displayed it briefly in their window at 159 Baldwin Street before shipping it off.  The advertising was still paying off a few years later.  In June 1893, even more international correspondence came, this time from Switzerland. It was translated by Miss Abbey B. Coulson of 110 Ferris St., Elmira. Below is the original and her translation: 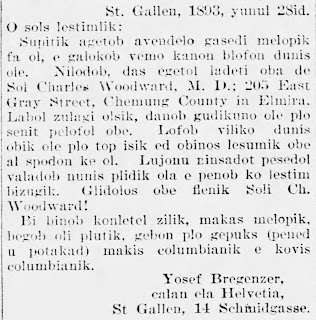 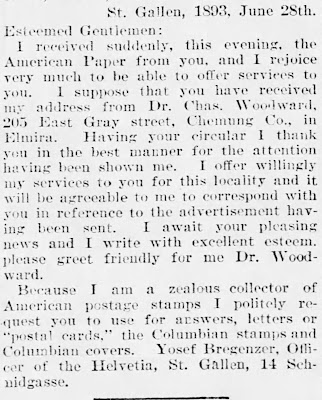 In 1896, the company received an order for a large water color portrait from a tea merchant in China. The request was in Volapük.

By the 20th century, Volapük’s popularity began to fade and was surpassed in part by another constructed language, Esperanto.

Posted by Chemung County Historical Society at 6:12 AM