By Kelli Huggins, Education Coordinator
Embarrassing moments: we’ve all had them, and people in the past were no exception to this shame. While I won’t be sharing any of my own personal lowlights, I do really enjoy a regular column that ran in the Elmira Telegram in the 1910s which printed reader-submitted embarrassments for everyone’s enjoyment. If you spend some time reading them, you’ll realize that there are certain situations that are universally embarrassing, regardless of the decade in which they occur. However, some others are a little hard for us to relate to in the 21st century. Below are a selection of some of my favorites: 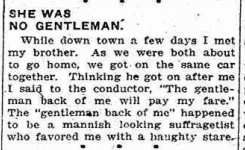 The most embarrassing moment of my life was when I sat down on a custard pie at a picnic.

My most embarrassing moment was when I attended my first dance. I was not a good dancer and as the music stopped I heard my partner say under his breath, “Well, thank goodness!”

The most embarrassing moment of my life was when I went to a party with a girl. During the party it began to rain pitchforks. Another youth offered to take the girl home under his umbrella. She declined, saying she would rather go under my umbrella. Imagine my embarrassment later when I had to tell her I had no umbrella. 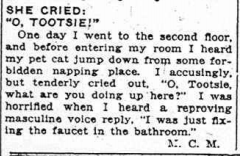 It was late when we arrived at the theatre and the house was dark. Our seats were in the balcony, and as I went down the aisle I laid my hand on what I thought was a post, but lo and behold. It began to move. What was my horror to find that the object was a man’s bald head. In my embarrassment I stammered in an audible tone, “O, pardon me, I thought you were a post.”
While parading down one of the streets in the loop I noticed that everyone looked at me. Being as homely as they make them, but perfectly healthy, I commenced to think I was getting better looking. After several passersby laughed out loud I looked at myself from head to toe and discovered that in my haste I had only one spat on. To make matters worse I had the spat on over a shoe and the top of the shoe was gray and the spat white. 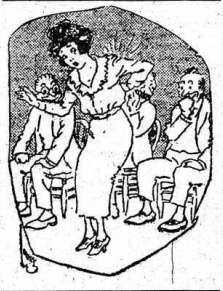 My most painful as well as most embarrassing moment was when I once occupied the speaker’s platform with six men. I being the only woman. I had a new frock for the occasion, an airy-fairy thing that made me feel I was at my best. But not for long . How can I describe my physical torture and mental anguish when I discovered that I was not the only inhabitant of that dress? My right to be therein was being disputed by a flea! Squirm and writhe as I would and pat and smooth with my hands, I could not persuade that flea to leave nor yet to dwell with me in harmony. To leave the platform was out of the question and when in a few minutes my address was called I was frankly and plebeianly scratching!

Posted by Chemung County Historical Society at 8:05 AM