Officer John Hurley had come up against some hardened criminals before, but nothing like the gang he encountered in 1903. He had been a member of the Elmira Police Department for five years, arresting people for vagrancy and public intoxication, petit larceny and burglary, and even riding a bicycle on the sidewalk without a permit, but, on June 12, he came upon a type of misbehavior he had never encountered before – a six-year-old boy and his buddies on a wild spending spree.

Little Johnnie Presnel of 103 Bloomer Avenue told all his buddies about the $20 bill in his pocket and led them through downtown Elmira looking for ways to spend the cash. None of his pals bothered to ask where he had gotten the money and none of them cared. Arriving at a store on Water Street, Johnnie entered alone. When he stepped outside again, he showed off the brand new air gun he had purchased for $1. His companions were rightly impressed. All they had were pretend guns whittled out of pine branches.

And not only did Johnnie have a new gun, now he suddenly had more bills than before. As a six-year-old, he likely didn’t have a good grasp on the value of the paper bills. He just knew that he had walked into the store with just one bill and came out with multiple. So, he and the boys went on their way, anxious to spend more.

Johnnie led the procession up Railroad Avenue and they went on a “peanut spree,” buying and eating all the roasted legumes they could, much to the delight of the peanut vendor. The indulgence was a bit much for a few of the boys whose stomachs began to ache. Some went home but there was still a good number in the gaggle when they encountered Officer Hurley. He bravely stopped them in their tracks and demanded to know what they were up to. After listening to several unsatisfactory explanations, he pinned Johnnie as the ringleader and took him into custody.


At the police station in City Hall, Officer Hurley was still unable to get the truth out of Little Johnnie. He had to bring in the big guns, Detective Charles Gradwell. The detective had joined the Elmira Police Department a year before Officer Hurley and had a reputation as a friendly soul who always got his man. Under his questioning, the boy first said he received the money in a letter from an uncle and that his mamma had insisted that he spend every cent in any way he saw fit. Detective Gradwell did not see any truth in his answer so they called Johnnie’s father, John Presnel, into the station. John questioned his son and got no better answers. They did find out that the child had $16 left of the original $20 and that one of his companions had borrowed a few bills from him when he wasn’t looking.

Finally, the detective turned oh his “bad cop” persona and suggested that they hang the boy up with a rope tied around his neck unless he told the truth. At this threat, the six-year-old finally broke. With tears streaming down his little cheeks, he confessed that he had taken the money out of his mother’s pocketbook. With the mystery solved, the police turned Johnnie over to his father who promised that he had a slipper with an extra thick sole waiting at home to be properly brought into use on his wayward son. 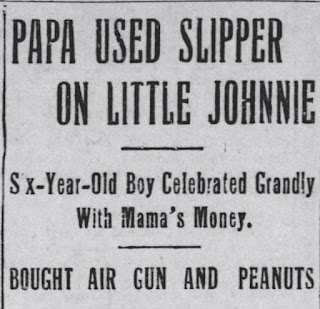 Posted by Chemung County Historical Society at 7:36 AM