Andrea is a new Education Volunteer at the Chemung Valley History Museum, coming to us with a history degree from Troy University, and experience in education. She has lived in Chemung County for most of her life and excited to be able to learn more about local history and its connections to our lives today. We are lucky she found us!

A piece of local history that seems to be fading is the account of the Skunk Hill Ranch. For many years the name of the road kept its memory alive, but after being renamed, fewer and fewer of our community can tell you where to find Skunk Hill. Skunk Hill Ranch Road (Skunk Hill) has been renamed Harris Hill Road for many years now, and is the steep road connecting County Route 64 in Big Flats with the top of Harris Hill. 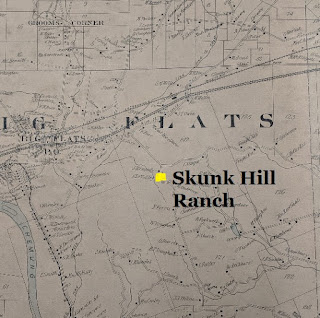 Skunk Hill Ranch was born out of a time when fur demands were still high and even the Department of Agriculture was endorsing this get-rich-quick scheme as the next millionaire-making business. In 1896, a prominent Elmiran, Fred LeValley, built his new business venture in nearby Big Flats, far enough away from town not to offend the local residents. On a cinder path on the side hill, the hopeful rancher built his stone and fence enclosures that would become home to thousands of skunks. Pens were first surrounded by ditches then backfilled with stone to keep any of the skunks from burrowing under the fence. It was said that these skunks were quite tame in their pens, but did not always appreciate visitors.  Unfortunately for this local capitalist, it was not the imagined goldmine. In 1904, less than ten years later, the farm was given up. LeValley found that domestic skunks could not produce the lustrous fur quality of their wild counterparts. This issue may have been in part the difficulty of raising skunks on a proper diet in captivity, though it’s said that they were raised on raw meat procured from the local area.  In 1897, Chemung County gained a second skunk ranch when an established farm from Brockton sold to a new owner in Van Etten. This farm seemed to have experienced the same issue with fur quality before its move.

Skunks grown on these ranches were raised for both their fur and their oil, which was used in the cure of several ailments. When Chemung County’s first skunk farms were created, skunk fur was selling for $1 per fur with oil selling at fifty cents an ounce. Beginning around the 1880’s the call for skunk fur began and was predominantly from Europe. Parisian fashion kept up the demand for skunk fur in coats, muffs, hats, and decorative fringe, though for fashion’s sake it may have been sold as Alaskan Sable, American Sable or Black Marten. Well through the twentieth century skunk fur could be seen advertised for its fashionable glossy coat and warmth. As far as fashion went, the best skunk was one with an almost all black coat. Though it is hard to find this trait in the wilderness, many ranches found that breeding this trait was their ticket to success.
Skunk oil turned out to be a more reliable income for farmers. Skunk oil was not, as you may be thinking, their infamous odor-containing spray, but rather fat renderings that were heated into the sought-after product. Skunk oil was sold as a cure-all used for rheumatism, coughs and colds, skin softening, and whatever else one might think to try. Skunk oil could be taken internally or externally depending on the ailment; it was known to cure colds both as a chest rub or ingesting a teaspoonful. It was also used as a regular supplement, much in the way cod liver oil was used.
Farms like the Skunk Hill Ranch and the Van Etten farm catered to both of these supplies well into the twentieth century, but unfortunately most farms saw an end much like our local skunk ranch. The land that once held the Skunk Hill Ranch is private property today, but would have sat very near the clearing for the power lines on the right side of the road heading up the hill.

Posted by Chemung County Historical Society at 6:14 AM