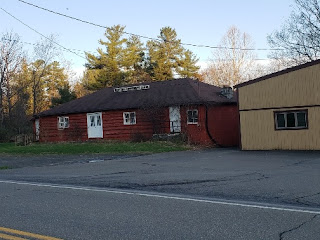 Anyone driving up West Hill might notice the empty space next to the fire department where the West Hill Community Cabin once stood.  The cabin was torn down recently in a state of bad repair.  But for over 80 years the Community Cabin served the residents of West Hill and the surrounding community.  During its time it served as a dance hall, meeting place, theater, and all-around event venue.

The cabin was built by The West Hill Community Council, who decided to rectify the structure based on the necessity of a permanent meeting place.  The West Hill Community had previously hosted their events at the Carr’s Corner School or private homes.  In 1932, it was decided their new clubhouse would be a simple log cabin.  It’s said the Community Cabin was inspired by a log cabin built by Ralph Crain on Halderman Hollow Road.  With books loaned to them by attorney Richard Heller, the council began to design.  A single story 30’ by 60’ design was decided on.  When finished the cabin would provide a kitchen and dining room in the walkout basement, and a large open meeting room on the main floor.  The stage was added later in 1953 to main floor to accommodate school plays.

Supplies and labor were donated by local farmers.  Logs for the structure were donated by several farmers, rough cut wood was supplied by Fred Storch’s mill, and Ernest Stowe donated the land at a mere one dollar for a ninety nine year lease.  Electricity during construction was supplied via extension from William Storch’s farm approximately 300 yards down the road, until Willis Bennett installed permanent wiring.  For items that could not be donated, the ladies of West Hill hosted fundraising suppers at the German Church in Elmira.  The basement was dug by teams of horses with scrapers, where they also dug the first well near the kitchen.  Logs were prepared with axes, saws and drawknives.  Work progressed through the winter of 1932-1933, until its official opening on July 4, 1933.  The official opening of the Community Cabin was marked by an Independence Day picnic and square dance, complete with a patriotic fireworks display. 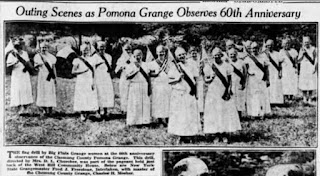 In the earlier years, dances were one of the biggest attractions.  Live music from the Green Mountain Boys and Woodhull’s Olde Tyme Masters was popular for many years.  Later the DJ, Ronnie Ruckles, was a weekly hit with dance-goers.  Regular dances brought crowds every Friday night from 9pm-1am.  Many of these dances were hosted by local groups for fundraising efforts.  Funds went to their own reserves, as well as worthy causes such as the Red Cross and relief societies. 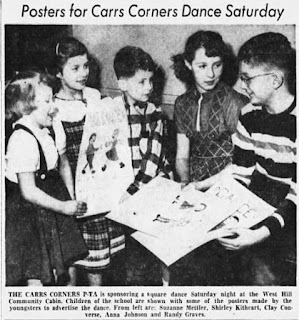 Community organizations such as the Grange, Carr’s Corner 4-H, the Home Bureau Federation, Elmira Dairyman’s League, and other agriculture based clubs enjoyed the cabin as a meeting place central to the farming community.  Speakers were invited to lecture on subjects such as how to improve agricultural sales profits.  The Home Bureau hosted lessons on domestic skills for local women such as caning chairs, breakfast breads, and organizing kitchens. Carr’s Corner and Thomas Edison students produced their school plays on their specially built stage.  The Cabin Council also supported many of the events, such as a yearly Harvest Supper, and regular picnics and suppers.  Private rentals made it a popular location for reunions, anniversaries, and receptions.   The community cabin was a convenient place to host parties, with facilities for cooking, dining and dancing. 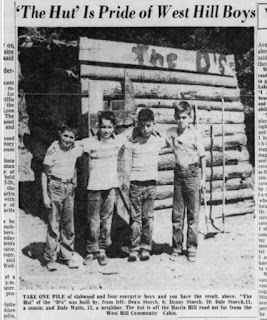 After a fire claimed Doug Dalrymples’ horse barn in 1960, the citizens of West Hill decided they needed a local fire district to protect their homes and property.  By 1961, the West Hill Volunteer Fire Department had been established, and the firehouse was to share the same piece of land with the Community Cabin.  The original twenty-two volunteers, and president Ray DeLamarter happened to be many of the same group that were involved in the West Hill Community Council.  The fire department is also a thing of the past now, unfortunately having closed its doors in 2008.

Unfortunately, as the years have passed the clubs and community that had supported the need for a clubhouse dissolved.  It is sad to lose what was such an important hub of a community, but hopefully we can preserve its memory.  In my research for this article I found that our Historical Society has no information about the Community Cabin.  Please feel free to share any of your memories or additional information in the comments below.

I would like to thank, Dianne Storch, David Storch, Melissa Rozengota for helping to recall some of this information.
(A special note from CCHS staff to Andrea and her family, who recently lost their grandfather Dale Storch mentioned in this blog. A little of his history is preserved here.)
Posted by Chemung County Historical Society at 11:36 AM