Old news: The Pledge of Allegiance


Once again, controversy over saying or not saying the pledge of allegiance is in the local news . For most of us, it’s a ritual we learned as young children, reciting it each morning in school. This practice didn’t start when the United States became a country but began a hundred years later in the 1890s. Using the 400th anniversary of Christopher Columbus’s landing in North America as inspiration, a magazine publisher set about looking for more subscribers. He promoted installing flags in every classroom and commissioned a pledge to recognize the event. Today a version of that original pledge is recited every morning in schools across the nation.

1892 was a presidential election year. Four years earlier, President Benjamin Harrison had won the electoral vote but had lost the popular vote to Grover Cleveland. Both were running again. Many in the US were experiencing economic prosperity as the country slowly recovered from the Civil War. Others, not so lucky, resented many of the immigrants brought in to work in the new factories. Columbus Day was primarily celebrated by Italian American and Catholic communities, both groups viewed with suspicion at the time. The climate was ripe for magazine publisher Daniel S. Ford to promote the idea of national unity.

Originally Ford had hoped to become a Baptist minister. Instead, he went into business with Baptist Rev. Dr. John Olmstead and published a weekly religious newspaper, The Christian Watchman & Reflector. The paper became such a success, they bought another publication called Youth’s Companion. This magazine was one of the first American publications written for children. It was known for its strident religious and moral instruction. 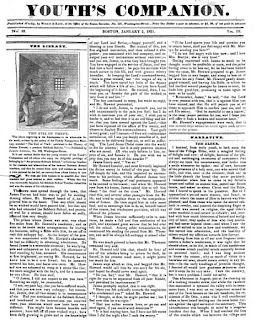 When the partnership dissolved, Ford drew the shorter straw in a contest. He now became the sole editor and owner of the modestly successful Youth’s Companion. Determined to make it more of a success, he changed its content to appeal to wider audiences by featuring popular writers like Booker T. Washington, Mark Twain and Emily Dickinson. He increased readership by offering prizes to those who sold the most subscriptions, and to reach even more people he hired his nephew-in-law James B. Upham to be in charge of circulation.

In addition to this business skills, Upham was known to be interested in promoting children’s patriotism. With Ford’s approval, he used the model of subscription incentives to start a campaign of placing a US flag in every school classroom. He encouraged students to request cards from the magazine to sell to their classmates for a dime a piece. By purchasing a card, buyers received “one share in the patriotic influence of the school flag” and with three hundred cards, earned a flag for their school. To add flourish and create more of a ceremony, Upham asked staff writer Francis J. Bellamy to write a short patriotic pledge for students to memorize and recite. Bellamy, in addition to being a journalist, was a Baptist minister and well-known Christian socialist. He wanted to include words like equality and fraternity, but these were soundly rejected on the reasoning that superintendents would never support words recognizing African Americans or women in 1892.

Bellamy’s finished pledge was twenty-two words that students could recite in under fifteen seconds. The Youth’s Companion edition of September 8, 1892 featured this pledge in anticipation of the upcoming anniversary. 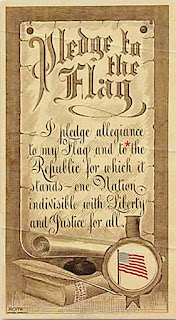 Candidates President Harrison and Cleveland quickly endorsed Ford’s campaign to introduce the national flag and pledge into all schools to recognize Columbus Day. Perhaps they feared if they didn’t, voters might see them as unpatriotic. Thus for the first time on Columbus Day, 1892, the pledge was recited by thousands of school children. Despite the patriotic rush, it took another fifty-five years before Columbus Day became an officially recognized national holiday.

By the time each classroom in Elmira displayed a US flag, it was 1925. The local campaign was led by Mr. O. Wendell Hogue, Director of Grades for Elmira schools, and head of the Americanization Committee for the American Legion. By then, the original pledge had been changed. In 1923 “my” flag became “the flag of the United States” to eliminate fears that immigrants might pledge to their nation of origin instead of their new nation. Also in 1923, the American Legion led a movement to adopt a US Flag Code. This offered civic expectations on how to display and treat the national flag. In 1942 “of America” was added to the words “United States.”

Other adjustments included how the flag was saluted. Before the 1940s, students recited the pledge while standing. They extended their right arms straight ahead, pointing their fingers upwards in the direction of the flag. It was known as the Bellamy salute. In the mid-20th century, the posture began to resemble images of Nazis honoring Adolf Hitler. 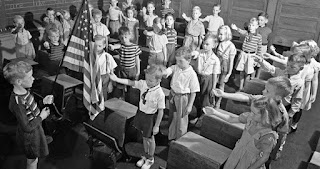 The US was on the verge of entering WWII and Congress quickly adopted the American Legion’s flag code, and changed the way to salute. When reciting the pledge, people were asked to stand and place their hand over their hearts, as we do now.

For decades people have raised objections, some feeling they are unfairly forced to recite the pledge. Perhaps the most recent change made in the 1950s has created the most friction. It was then during the cold war era, that President Dwight D. Eisenhower pushed for the phrase “under God” to be added to the pledge.